I am delighted to have an interview with the prolific and talented Jennifer Estep!  I have had the pleasure of reading and reviewing the entire Elemental Assassin

series as well as her wonderful young adult Mythos Academy

series and I love both!


Q: What hobby has had a direct impact on your stories and how?


JE: I would say reading, especially when I was a kid. I always enjoyed reading, but as I got older, I started to want to write my own books with my own characters and worlds and tell the stories that I wanted to tell. I like to read fun, action-packed books with a little bit of everything in them – action, adventure, magic, romance – and those are the kinds of books that I like to write too.
I think that all writers start out as readers, and that reading a book you love inspires you to want to write something that’s just as good, that someone else will hopefully enjoy just as much as you have enjoyed all the good books that you’ve read over the years.

Q: Where’s the most exciting place you have done research?


JE: My office. LOL. No, seriously. The Internet makes it so easy to research just about anything you could think of. All you have to do is type what you’re looking for into a search engine, and you can get started on your research. Boring, I know, but that’s how I do most of my research.
However, I would love to take a trip to Alaska, Hawaii, or somewhere like that and then set a book there. Maybe that will happen someday. Fingers crossed, anyway.

Q: What has been the most challenging about your road to publication?


JE: I would say just getting started, persevering, and believing that if I kept on writing, that I would eventually get published. I wrote seven books over the course of about seven years and got hundreds of rejections before I sold my first book. So getting published definitely didn’t happen overnight for me. But I kept writing, working, learning, and trying, and it eventually happened for me.
Q: Which mentor has made the most impact on your life?
JE: Definitely my mom. She used to take me to the library ever week when I was a kid, which is how I fell in love with books and reading in the first place. I doubt that I would be an author without her.
Happy reading, everyone!

Blurb:
Keep your friends close but your enemies within stabbing distance.
One important lesson I’ve learned in the assassination business is that to be the best you have to roll with the punches. Now that I’m queen of Ashland’s underworld — by default, not by choice — a lot more punches are being thrown my way. But I suppose that’s the price of victory for taking down some of the underworld’s top dogs. Good thing I have my Ice and Stone magic to help me survive my volatile new position. Just when I think things are finally settling down, someone tries to murder me during a hush-hush underworld meeting. But the real surprise is how strangely familiar my shadowy assailant seems to be.
My job is to maintain order among killers, crooks, and thieves, and soon I’m embroiled in a bloody game where the ability to keep secrets could be the greatest superpower of all. My enemies have all sharpened their knives and laid their traps, waiting for me to fall. But this Spider weaves her own webs of death…

Still, I would have been perfectly happy to skip the polite nonsense of the meeting and let Dimitri and Luiz duke it out until one of them killed the other, but Silvio had pointed out that if I resolved their feud today they wouldn’t show up at my restaurant, the Pork Pit, tomorrow. Since I didn’t want the criminals scaring my customers, I’d decided to be a good boss and put in an appearance.
Everyone had been sitting at the conference table when I’d walked on board with Silvio. But at the sight of me, Dimitri and Luiz had shot to their feet and started shouting accusations at each other, as if they thought that I would side with whoever yelled the loudest and the longest.
Now, Dimitri was cursing at Luiz in Russian, and Luiz was returning the favor in Spanish. Since it didn’t look like they were going to stop anytime soon, not even to take a breath, I tuned them out as best I could and peered out over the brass railing.
The Aneirin River flowed by the white riverboat, the swift current causing the vessel to sway ever so slightly. The November sun glinted off the surface of the blue-gray water, making it sparkle like a sheet of diamonds, while a faint breeze brought the smell of fish along with it. My nose wrinkled at the wet stench. A few crimson and burnt orange leaves clung to the trees that lined the far side of the river, although the breeze would soon send them spiraling down to the ground—
Something flashed in the trees directly across from me.
I frowned, leaned to the side, and focused on that spot. Sure enough, a second later, a small gleam of light caught my eye, the sun reflecting off something hidden back in the trees—
Silvio nudged me with his elbow again, and I realized that Dimitri and Luiz had stopped shouting and were staring at me with expectant faces, their arms crossed over their chests. Behind them, their guards wore similarly hostile expressions.
“Well, Blanco?” Dimitri demanded in a low, gravelly voice. “What’s your decision?”
“Yeah,” Luiz chimed in, his tone much higher. “Who gets the laundries?”
I looked back and forth between the two of them. “Um …”
Dimitri frowned, and anger sparked in his dark brown eyes. “You weren’t even listening to us!”
“Well, it was kind of hard to follow,” I admitted. “Especially since I don’t speak Russian, and my Spanish is rudimentary, at best.” 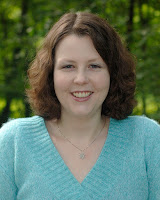 Jennifer Estep is a New York Times and USA Today bestselling author prowling the streets of her imagination in search of her next fantasy idea.
Spider’s Trap, the 13th book in her Elemental Assassin urban fantasy series, will be released on July 28.Spider’s Bite, Web of Lies, Venom, Tangled Threads, Spider’s Revenge, By a Thread, Widow’s Web, Deadly Sting, Heart of Venom, The Spider, Poison Promise, Black Widow, and Spider’s Trap, along with the e-shorts Thread of Death, Parlor Tricks, and Kiss of Venom, are the other works in her Elemental Assassin series.Jennifer is also the author of the Black Blade and Mythos Academy young adult urban fantasy series and the Bigtime paranormal romance series.For more on Jennifer and her books, visit her at her website, her blog or follow her on Facebook, Goodreads, and Twitter (@Jennifer_Estep).