I'm delighted to share with you a guest post by author Marie Johnston, who answers my question...


ELF: Which author(s) has/have been the most influential to you and how or why?

MJ:  This is going to sound like a sales pitch for JR Ward, but she’s my favorite author. Reading her work intimidated me away from writing, but husband kept insisting she had to start somewhere, too. That got me considering…maybe someday I’d write a book.


So, I started paying attention to what I liked about her books. The characters? Yes. The natural humor she infuses? Absolutely. That she made big words easy reading? I had to look a few up. She weaves emotion in from start to finish. Her writing immediately sucks me in until I’m reading a scene about a character choosing which ice cream to eat and I’m riveted. How in the world can I do that?


A lot of practice, and my editor still highlights sections asking why I’ve added such detail that I don’t bring up later. Writing’s a work in progress, literally.


When I first started writing and creating my brand, I gave blogging a try. And this is a little over the top, but I wrote out 20 things I learned about writing from JR Ward. I did this for a couple of authors, back before I knew what character arcs were, black moments, and subplots. I’d love to go back and identify the techniques I’d noticed, but couldn’t identify. But back to the JR Ward blog: I separated it into four different posts and gathered the courage to tag her on Twitter each time I post a set.


Y’all…she liked my tweet. Each time. I was even more ecstatic because one of my points was that she does her own social media. When she posts and tweets, it’s her. She liked my tweet. I didn’t care if she read the post. I would’ve died inside if I knew.


But she did. Because one of the last points I made was my observation of her social media presence. And she tweeted me, telling me that it was always her on her accounts, and that we’re equals in writing, this biz is hard, and she wished me luck.


I was sitting in the waiting room at my kid’s speech therapy, having a major fangirl moment. Squeeeee!!! She even sent a pic of her beloved dog.


I’ve never met her and I don’t know that I ever will, but she’s had a huge impact on my ambition and optimism, which in turn affects my longevity in this business. Whenever the words are a struggle and I need to fill the creative well, I read one of her books. When I’m editing, I can even tell when I read her work. The words come alive and I’m much less restricted in my scenes. This is when I believe the advice I often see others give: To be a good writer, read a lot.

Love You So Series 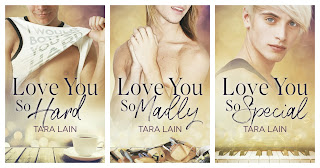 Bk 1
LOVE YOU SO HARD

Bk 2
LOVE YOU SO MADLY

Tara also owns an advertising and public relations firm. Her love of creating book titles comes from years of manifesting ad headlines for everything from analytical instruments to semiconductors. She does workshops on both author promotion and writing craft. Together with her soulmate husband and her soulmate Dog, she recently realized a vision to live where there were a lot more trees and a lot fewer cars by moving to Ashland, Oregon. She hasn’t stopped smiling since.


I apologize, most of the following pictures will be fuzzy because I turned off the flash to avoid blinding the authors (I figure it's pretty rude to make them sign autographs with afterimages in their eyes!).

Again, I urge you to attend if a book conference is going to be in your neck of the woods. At the very least, there is usually a signing day that is free...and not only do you get to talk to your favorite authors and meet new ones, but you can also gather lots of bookmarks and swag! The authors are delighted to interact with fans and happy to take pictures with you or sign your books.

In L.A., In D'Scribe is coming to Burbank next month (info) and Saturday, October 6, 2018 is the Reader Rave Book Signing. It's a great time to visit with your "tribe" and discover a new title or two (or ten). 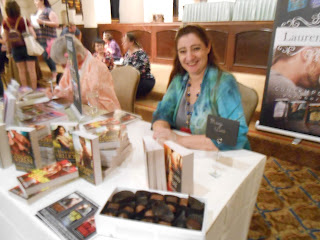 Naturally, I was drawn to Mary Wine's table, not only because of her beautiful books but because she had a box of See's candy! 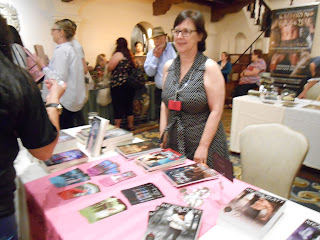 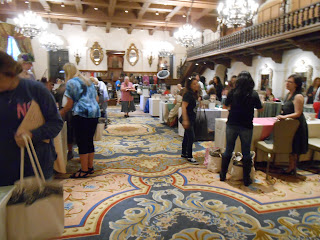 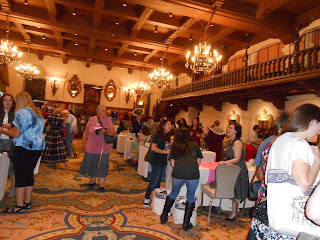 I have the pleasure of sharing a guest post by author Bobbi Smith. I FINALLY  added the pictures of the beautiful buildings that she supplied, thanks for your patience   (0;


My blog question today is – What would be your dream place to visit and why?

I love to travel. My family went on a lot of driving vacations when I was a kid, and I fell in love with all of the U.S. From the Arizona desert to the snow-covered mountains to the Atlantic and Pacific coasts, it’s all breathtaking and endlessly fascinating to me.


The one thing that stayed with me from my childhood, though, was something I learned in French class during my freshman year of high school. We watched a filmstrip series about a girl named Margot and her uncle, and how they toured the chateaux on the Loire River in France. Wow! What magnificent architecture! I’d grown up living in flats in the city and always loved looking at big houses on lots of land. It was fun to imagine what it would be like to live in one. When I saw these castles, I was awestruck. I certainly would love to visit them, but I wouldn’t want to have to clean them!  J


I came close to visiting “castles” when I toured the Southern plantations in Louisiana and Mississippi. I spent the night at Nottoway Plantation on the Mississippi River while I was researching my first book, Rapture’s Rage. What a wonderful experience. I got up early and went to walk the grounds. There was a heavy mist that morning, and that’s how I came up with the title The Mist and The Dream for my book. (Only later, after I’d sold the book, did I discover that the publisher has control of the title, and they changed it to Rapture’s Rage.) If you like beautiful mansions, check out Nottoway, Madewood and Oak Alley.