Contest at Long and Short Reviews! 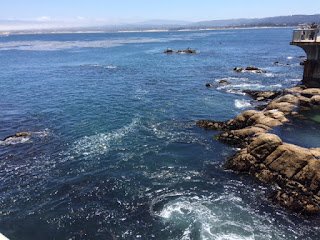 I almost forgot to mention this...and it ends TOMORROW!

This link will take you to one of my authors' page, but there are tons of great blurbs and excerpts to read, and even better TWO great GC to vie for! For those who are like me and don't use FB, there are plenty of other options on the 2nd Rafflecopter.


Seeing the future is a nuisance. Ariel does her best to shut it out, until she stumbles on a group of clairvoyants using their talents to get extremely rich. They have her attention. Then she meets a second bunch obsessed with surviving an upcoming near extinction event.

Both factions seem dangerous and, to be honest, a little crazy. They don’t get along. As they learn more about her, however, each group decides Ariel’s particular abilities are hard to find and exactly what they need.

There is no possible way to help them both. Aligning with either may be a bad idea, but staying out of this mess is no longer an option.

“I’d really like to think about it.” She said it as calmly as she could while she crinkled the papers between her thumb and index finger, trying to learn more.

“We’d like to get the paperwork started before the end of the week,” the man from HR said. “Tomorrow is Friday.”

“Right. Let me take this information home and I’ll give you my answer in the morning.”

As she stepped outside for air, she had a pretty good idea of what her answer would be. The nice man from HR hadn’t noticed her placing her hand against the wall after handling his manila folder, and he had no way of knowing it was to steady herself against a kaleidoscope of new visions rushing at her while a tiny percent probability turned into an almost certainty.

Ariel muttered it as she made her way out of the building, her eyes half closed as she tried to calm her mind.

She sat down on the cold concrete steps to steady herself.

What Clyde didn’t know, couldn’t know, would never know, was that in making his proposal he probably affected the fate of the world. Many weeks from now, Ariel was likely to discover she had a chance to play a role in the survival of the human race. She couldn’t see how, she couldn’t see when, and as the flashes of little specks of her most distant visions whirled their way through her brain, all she got with any clarity was that her going to Ireland mattered. A lot.

Yes, she ought to accept the transfer.


Sherrie Roth grew up in Western Kansas thinking there was no place in the universe more fascinating than outer space. After her mother vetoed astronaut as a career ambition, she went on to study journalism and physics in hopes of becoming a science writer.

Fire Dancing for Fun and Profit

Treasure Hunting for a Good Time

Leaving the Nest to Touch the Sky

Touching the Sky to Save the World


Flicker of Fortune by S.R. Cronin is a science fiction/fantasy story that is part of the ’46. Ascending’ series. This particular volume centers on Ariel Zeitman, who possesses the power to see the future but has not really explored her ability or consulted with others about it until a job interview changes her destiny. As she discovers that there are different permutations of clairvoyance, each decision becomes more pivotal, and her interactions with others who possess this ability draw her deeper into a dangerous web. Not only is the distant future of humanity at stake, but Ariel’s immediate future gets more and more precarious. It’s time for the Zeitman family to have a frank talk.


The fascinating aspect of this series is that each book can indeed stand alone but definitely is enhanced by the reader being aware of the storyline of those that came before. I inadvertently started reading the sequel to this book and therefore got a slightly different perspective (mom’s) to some of the events that take place without too much of a spoiler but it was no problem to stop that one and read this one. They flow together seamlessly.


I love that various aspects of mental abilities are showcased even as current events and the possibilities inherent in the manipulation of things are explored. This author is adept at playing the “what if” game and provides thought-provoking stories that also entertain.


I had trouble connecting with Ariel. She doesn’t seem to have had the strong ties to her family that her siblings have and her decisions are sometimes a little off to me. Those who have triggers should be warned that there are a couple of coercive scenes that were uncomfortable for me—although they could have been far worse—and I was disturbed that there were no immediate repercussions for the perpetrator.  There are also multiple characters and interconnections that get a little disconcerting as their points of view are intermittently included but it all eventually comes together.


One of the things that amused me the most is that this book is primarily located in the far north (and beyond) and had very chilly settings whereas the following book involves activity at the opposite pole, with the attendant heat and humidity. I look forward to reading more adventures involving this very unique family and others with abilities that truly reflect the maxim that great power comes with great responsibility. This is not my favorite book of the series, but it does make one think about cause and effect with global implications as well as offers a glimpse of what the mind could be capable of.


A copy of this title was provided to me for review