The Lady Under the Lake by EJ Russell (Spotlight, excerpt, and review) 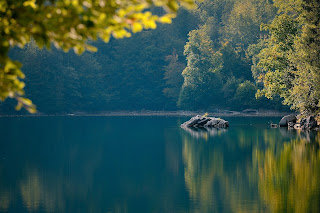 The Lady Under the Lake

This client is all wet...

After receiving a hot tip on the whereabouts of my almost-boyfriend’s nearly-ex-husband (hey, I told you—it’s complicated!), I thought my love life was finally coming up for air. But when we stake out the remote lake, it’s not the ex who surfaces.

It’s the Faerie King’s long-missing mother (and I mean really long, as in double-digit centuries), and she wants to hire Quest Investigations. Since one of my bosses is the king’s brother, he has a tsunami of…feelings about her as a potential client, and refuses to take the case. Instead, he passes it to me.

Should I be thrilled at the vote of confidence or suspicious that he’s tossing me in the deep end without a life preserver, the better to punish the woman who abandoned her kid all those years ago?

You know what? It doesn’t matter. I may be Quest’s token human, but I’ve proven I can get the job done, so I dive right in. Then the lady explains what she wants me to do: find her missing child.

Seriously? I expected more of a challenge. All I have to do is introduce her to the king and bingo, case closed. But when she says, "Not that one," this little family drama threatens to send ripples throughout the supernatural community—especially with my boss in over his head as the prime suspect in a fae kidnapping.

As if things weren’t complicated enough… Remember that nearly-ex? When he shows up and muddies the waters, I’m faced with a choice: I can solve this case or I can finally hook my almost-boyfriend.

I gazed out the window, not that the fields in Lane County were particularly interesting this time of year. As I did, I caught sight of the truck bed in the side-view mirror. The empty truck bed. “Where’s the canoe?”

Lachlan chuckled. “The beaver clan doesn’t want us on the water. It seems that their kits’ first ever lodges aren’t as sturdy as they might be, and they don’t want to risk any damage.”

“Rusty Johnson and Casimir Moreau are letting us use their dock. The rest of the clan can’t fuss about it because Rusty built the house on the opposite side of the lake from where most of them live—after Casimir bought all the other lots on that end of the lake.” Lachlan chuckled. “Seems the two of them like their privacy.” He winked. “Fond of naked midnight swims as they are.”

I swallowed, my throat gone thick. “G-good to know.” To distract myself from the image of Lachlan and me on a naked midnight swim, I looked everywhere but at him. That’s when I noticed something else missing. “Where’s your pack?”

Lachlan flicked on his turn signal and headed for the highway exit. “Back on my boat.”

I turned in my seat, the better to frown at him. “But Wyn’s at the bottom of that lake. How are you going to find him without your skin?” Before you ask, that’s not as creepy a question as it sounds. Selkies are seal shifters, and they control their shifts by putting on or removing their seal skin, which resembles a very closely furred wetsuit more than a creepy eyeless seal that’s been boned by a Ginsu knife.

“I couldn’t swim in the lake anyway, lad, not in my skin.” His smile glinted as the sun slanted in through his window. “Not my seal skin, anyway. Selkies are salt water folk. The lake’s fresh water.”

“So what would happen?” My eyes got round. “You can swim, can’t you? I mean, without shifting? You wouldn’t drown?”

“I can swim, and I wouldn’t drown, but I couldn’t shift either. It takes the touch of the sea to keep me in seal form.”

I folded my arms. “Why does none of the selkie lore mention that?”

“Think back on all the selkie tales you’ve read or pestered me for. Have any of them taken place anywhere but by the sea?”

He turned onto a road marked Private. “There you go then. Maybe we like to keep a few secrets to ourselves.” He winked at me. “We’re not like you humans, who want to share every little thing about our lives with the world, whether the world cares about it or not.”

You humans. Yep, there’s still a divide, but with Lachlan, it’s always seemed like my humanity was more of a turn on than a drawback. Eleri had once told me, “Selkies and humans. It’s a thing.” Yeah, I was counting on that traditional thing. A lot.

“So if you can’t dive into the lake and invite him topside for a little chat, how will we get his attention?”

I blinked. “Bryce?” My other boss, Mal Kendrick, was married to a druid. I narrowed my eyes. “It’s not a potion, is it? Mal always says druid potions are nasty.” Since Bryce was an environmental science professor as well as a druid, I knew better than to think whatever magical doodad he passed along would hurt the lake or its denizens. But that didn’t mean it wouldn’t hurt Lachlan, or at least cause him significant discomfort.

“Nay. Just a little message I’ll float along on the water, to let Wyn know he’s safe and we’d be grateful for a chat.”

On the one hand, good that the calling card wasn’t too invasive. On the other hand, I’d prefer to deliver a more forceful message to Wyn. Something along the lines of Get your ass up here and divorce Lachlan already.

Lachlan pulled the truck onto a gravel drive that snaked through the woods and ended at a beautiful, sprawling Craftsman-style house right on the lakeshore. While the shrubs along the flagstone walk leading to its wide front porch were neat and healthy—I suspected a dryad gardening service—they weren’t particularly well-established. “This is new?”

He nodded. “Finished last spring. A wedding present from Rusty to Cas.”

I frowned at him. “How do you know so much about them?” I’d met both men—Casimir was the youngest vampire in the country, and would remain so since one of the conditions for that mass vampire rescue/exodus was a moratorium on turning anybody else. Rusty was a beaver shifter, but Inactive—unable to shift—so he was effectively human, although it didn’t seem to bother either him or Cas.

“The water-based supe community isn’t that big. I’ve known Rusty for years. We’re both…at odds with our clans, although for Rusty, it’s them rejecting him. With me, it’s the reverse. We’ve tipped a few pints in our day.”

We got out of the truck and I looked around. The house’s windows were all covered with blackout shades—which made sense, given that a vampire lived there. “They’re not at home, are they?”

Lachlan shook his head. “Nay. They’re at Cas’s place in Portland this week. Some kind of benefit for the hospital.” He gestured to a gravel path on one side of the house that led toward the lakeshore. “The dock’s down that way.”

We crunched down the slight slope toward the dock that extended fifteen feet or more into the lake. There was a small structure next to the dock, but it was completely on land, clearly not like the boathouses that dotted the far shore. “If they don’t have any boats, what’s that building for?”

Lachlan grinned at me. “Best not to ask, lad. But when they’re done with their naked swims, maybe they’d prefer not walking all the way back to the house.”

He studied the building, head tilted. “More than a shack, I’m thinking. I’d reckon more than wanking too, but also not our business.”

Lachlan took my hand and led me onto the dock, our footsteps echoing hollowly. When we got to the end, he sat down and patted the boards next to him. “Have a seat. We may need to wait for a bit before we get Wyn’s attention.” I complied, and when he pulled me tighter against his side, I didn’t resist.

Reality? Eh, not so much.

E.J. lives in rural Oregon, enjoys visits from her wonderful adult children, and indulges in good books, red wine, and the occasional hyperbole.

“The Lady Under the Lake” by E.J. Russell is part of the ‘Quest Investigations’ series and continues the adventures of Matt Steinitz, better known to the paranormal beings as Hugh Mann, as he tries to free his love interest, the selkie Lachlan Brodie, from his handfasting to Wyn, a water fae. Unfortunately, he gets sidetracked by a new client, also a water fae, who not only disrupts the smooth running of Quest, but may cause a rift that will affect even the rulers of the fragile Seelie/Unseelie Convergence.

This delightful gay paranormal story is an excellent addition to a fun and exciting series. I’m afraid that the show is always stolen any time Jordan, the young werewolf with a Frisbee obsession, is present, but adding the hellhound puppy Doop just seals the deal.

I love watching Hugh/Matt navigate the tricky and perilous path of being one of the few humans who is actually aware of the myriad of paranormal beings and who is truly interested in all of the permutations of the fae. He started out as a little too pushy, I thought, but his arc has shown that he truly cares…both for Lachlan, but also for those he’s come into contact with while working with Quest Investigations.

These stories are such a breath of fresh air, and I always am anxious to find out what is going to develop in these beings’ lives. I’ve always been enamored with various mythologies, and I find these new perspectives to be both fun and thought-provoking. I adore Jordan and Doop, and I can’t wait to find out how they destroy, I mean, help with more cases.