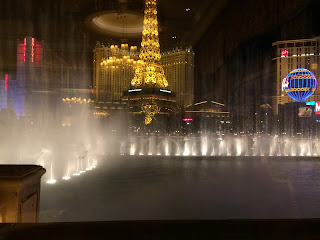 As you can tell from the glare, this was taken through a window, but it has some of the fun things about Las Vegas...a chance to watch the Bellagio fountains dance to music, the prospect of enjoying things from another country by visiting the Vegas version of Paris, and the bright lights of the city.

2017 was a challenge for many of us, both personally and professionally. Let's shed ourselves of those burdens and face the new year with a light heart and optimism and an intention to be kind to one another. Do something nice for somebody at least once a day...whether that is bringing a shopping cart to an elderly person (or returning it for them after they get their packages in the car), opening the door for an individual burdened with packages or children, or giving someone the benefit of the doubt when things are tense. Your spirit will be lighter and you will make another person's day that much better.

Happy New Year and may you have plenty to read and plenty of time to do so!
Posted by ELF at 11:58 PM 6 comments:

At eighteen, Donnie Kagan's plans for graduation, and maybe even college, were derailed by a beer, a stoplight, and a fatal crash. Now he's twenty-four, out of prison, and bitterly determined to start over. But with the holidays approaching, he can't resist a quick trip home to Tallbridge, North Dakota, and the man he left behind. Just a fast look, to make sure Adam's doing all right, before Donnie starts his new life. He doesn't plan to stay.

Adam Lindberg's been waiting six years to get closure with Donnie. He missed that chance after the accident, fighting for his life in a hospital bed as Donnie pled guilty and disappeared into the justice system. Without so much as a letter back from Donnie in all this time, Adam's tried to move on. And yet, he never found another guy he cared about the same way. So when Donnie shows up in Tallbridge, Adam's ready to fight for more than three words of goodbye. Of course, Adam's brother and dad don't want Donnie to stick around, but it's the busy Christmas season at the family store. If Adam asks for Donnie's help, maybe he'll stay long enough to finally talk about the future, and the past.

I let myself in down the hall to the john. Once the bathroom door was locked behind me, I sat on the lid of the toilet and put my head in my hands.
Beyond the hallway, the muted sound of voices and Christmas carols mingled in a garbled hum, distant enough to ignore. It was just me and silence in this cold little room, with the damaged tiles and rust-stained sink, behind a door that locked from the inside. For the last six months, this had been my idea of heaven. I let the quiet seep into me as the knots in my shoulders unkinked.
Down at my feet, I saw a web of cracks in the tile sealed with white caulk. It was a crap job, sloppy. I’d done that, eight years ago. Me and Adam, made to work off some prank I no longer remembered by fixing up the bathroom. Him and me and soap, paint, and caulk through five long days.
I traced the uneven lines of caulk with the duct-taped toe of my sneaker. I remembered Adam bending over to scrub gunk off the baseboards, and how the sight of him, the line of his back and ass, made it so hard to breathe. How I’d known, in that moment, what I wanted. And how sick I’d felt, not knowing if he might possibly want me too.
God, we were babies then. Him with his sunny view of the whole world. Me thinking I could be smart enough and tough enough to bend it to my will.
I kissed him that last day we worked in here.
I didn’t raise my head to look at the spot on the wall where he’d been leaning and laughing. Where I finally snapped and put a hand on his chest, stepped in close, and smooshed his lips with mine. I’d have freaked and run away but he shoved his hand into my hair and held me. Gentled the kiss. Said, “I was beginning to think you’d never do that.”
I was sixteen, he was fourteen and a half. We were so damned young, even with all I’d already been through. In the same grade, thanks to Mom’s screw-ups, and inseparable, with a future in front of us.
Now I was twenty-four, and this was a place to hide. Those memories needed to be locked away. Hidden, suppressed, until I could think straight again. I was so tired.
I imagined taking those summer days and stuffing them into a big box. I had a lot of boxes in my head. This one could stay closed with just a ribbon around it, something silk and soft. Some boxes in there were nailed shut, strapped with barbed wire and padlocks. This one I might get to open again someday.