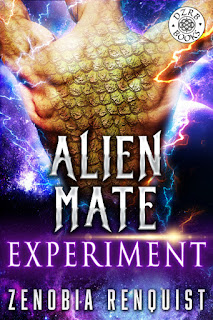 I have the pleasure of sharing a guest post from author Zenobia Renquist, who shares a little insight about her new story...

ZR:  Romance and I were estranged for two years. It was hard to see the HEA through the mire of life. And then I read Alien, Mine by Sandra Harris and Rescued by an Alien by Amanda Milo. There were a bunch of other books I read too, but those two resonated with me. Suddenly, I wanted to write a story with an alien hero who wasn’t just a tall human in space. He needed to be other. Very other.

My first thought was a reptile. You can’t get much more other than that. Well, you can but I wasn’t going to go that far. My brainstorming session turned in a writing session, and the next thing I knew, I was writing the entire story to the detriment of all else. Nothing was more important than finishing this book, and that included making dinner. There were a lot of insta-meals and delivery pizzas that week.

Yes, I said week. It took me a week (give or take a day or two) to finish Alien Mate Experiment. That was how badly I wanted this story to be written. It was amazing to feel that pull again after so long without—the absolute need to write about these two characters and how they ended up together. Romance returned, and it brought book ideas with it. Lots and lots of alien abducted women and strong, alpha Paranormal men who will have their books written in the near future.

Alien Mate Experiment
by
Zenobia Renquist
is an ADULT title

Abducted from her world and dropped onto his, she’s as alien to him as he is to her. That doesn’t mean they can't have some fun with their differences.

Semeera needs a plan for starting her life over. After divorcing a controlling husband, she’s ready to enjoy freedom at last. Too bad she gets abducted by aliens before she can decide her next move.

Captain Kader is an alien warrior trapped in a dead-end assignment where he will never see battle again. There are no more challenges to his life, no chances for glory. And then a dangerous experiment brings him an unexpected visitor who changes everything.

They are as different from each other as night and day, but those differences only entice Semeera and Kader into finding out just how physically compatible they are. What should have been a little fun causes the resurgence of a disease long thought extinguished.

If Semeera triggered it in Kader, will others succumb? And will the scientists be able to get past Kader to find out? Most importantly, can a beautiful black woman really love an alien male with scales, claws, and a tail?

Semeera didn’t ask the question aloud because she’d been the one to ask for an alternative to the elevator. She just hadn’t known she would be walking a marathon instead.

Captain Kader said, “The main thoroughfare of the ship is built on a spiral around the perimeter.”

She stopped and slumped against the nearest wall, catching her breath. “I give up. Let’s just use the elevator. I’m too out of shape for all this walking.”

“I could carry you.”

“It is no hardship. You weigh next to nothing.”

Semeera gave him a huge smile. “You are so good for my ego.” An ego that had been trampled too many times by her ex’s callous comments about her eating less and exercising more so she didn’t crush him—his phrasing—when she rolled onto him in bed.

The first time he’d said that to her she should have divorced him. Insensitive asshole. She’d almost developed an eating disorder because of him. And she blamed him for her post-divorce weight gain because she’d eaten everything she’d been denied to celebrate. And lots of it.

She shook her head and straightened. “Nope. I’m good. But thanks for offering.”

“You’re welcome.” He gestured to the side. “The elevator is this way.”

Once they were inside, with her clinging to his arm once again, she said through clenched teeth, “I will not be able to continue doing this—riding this elevator—after lunch. Fair warning.”

“Noted. I shall carry you then.”

“I will not allow you to overexert yourself. Nor do I want Doctor Gyan berating me for causing you harm.”

She met his determined green gaze and almost melted into a puddle of lust on the spot. Of course she wanted him to carry her. She was ready to climb him right then, but for different reasons. “Well, fine. If you’re gonna be all logical about it,” she said in a mock huffy tone as the elevator came to an abrupt halt.

She gave his arm a squeeze before letting him go and stepping into a gym. “Wow.”

“I’m pretty sure everything in here can kill me.”

“I agree. Please refrain from using them.”

“Hey!” She smacked his arm and then regretted it as the sting radiated through her hand. Shaking it out, she said, “You’re supposed to be encouraging and tell me all I need is time to get used to it as part of my acclimation.”

“I would rather be realistic. Your first assessment is an accurate one. You will not be allowed to use any of the machines.” There was a finality in his voice that left no room for argument.

“Not even the treadmills?”

He glanced at them and then smirked at her. “They don’t go that slow.”

“Whatever speed we were walking earlier, if not slow, is not a speed the treadmills go.”

She laughed. “Fine. Fine. Whatever. But I’m not slow. Your legs are just a lot longer than mine, making you naturally faster.”

“This is true of all khartarns, which is why no machine made for us will ever be slow enough for you.”

Still laughing, she said, “I take back what I said about you being good for my ego.”

“Your ego should not be so fragile that the truth hurts it.”

She sobered with a small nod. “You’re right. It shouldn’t.”

“No, you don’t have to apologize. It’s not you. Just old ghosts haunting me.” She inhaled a cleansing breath to banish her demon ex’s admonishments to eat less and exercise more and then looked around as a familiar scent hit her nose. “Is that salt water I smell?”

“You have a saltwater pool?”

“This way.” Captain Kader led her deeper into the gym to the pool.

The massive pool. She really needed a new word to describe everything the khartarns had. Their height dictated everything be big compared to what she was used to, but this pool was at least twice the size of an Olympic one, and appeared way deeper.

Several people swam laps, streaking through the water with their bodies stretched out and their arms at their sides, almost resembling thick snakes.

Captain Kader regarded them. “Are they?” His tone was less than impressed.

His superior tone shouldn’t have pricked her nerves, but the earlier banter about the exercise machines was still with her. She put her hands on her hips and gave him a look of challenge. “Prove it.”

Without the least bit of hesitation, Captain Kader stripped down to shorts that resembled boxer briefs—YOWZA!—and leapt into the pool, barely causing a ripple. He slid through the water like a bullet. Not only did he catch up to the other swimmers who were past the halfway point, he lapped them and was headed back to her before they’d even touched the far edge of the pool.

He surfaced and gripped the edge of the pool, looking up at her. “Satisfactory?”

Eyes wide and still trying to process what she’d just seen, she said in a breathy voice, “Amazing.” Goosebumps prickled her skin, and she hugged her arms. “Oh my God, that was beyond… anything. Do it again.”

He pushed off the wall and was off with serpentine grace. Even with the slower start, he still shot through the water and made it back to her at the same time as the swimmers he’d lapped the first time.

They stared at him in as much awe and admiration as Semeera did. Some voiced words of praise that Captain Kader ignored as he stared at her. Waiting. But for what?

If she said to do it again, would he? But that was silly. He couldn’t be trying to impress her. And to prove that point, she held up one finger and asked, “One more time?”


Author Bio
Zenobia Renquist (aka D. Reneé Bagby) is an Air Force brat turned Air Force wife, she was born in Europe, has lived in Japan and in several states of the US, including Virginia, Florida, North Carolina, Texas, California, Maryland and Hawaii.
She moved a lot in her younger years and remembers all too well being the new kid in fish-out-of-water situations. But those experiences only made her better able to adapt, as well they gave her a love of travel, preferring road trips over flying.
Turning her favorite pastime into her career, Renee loves to build worlds and torture her characters for the enjoyment of her readers. She can’t fill everyday with writing alone, and also enjoys watching anime, reading manga, crocheting, knitting (yarn and mail), and binging shows on Netflix. She’s a Whovian (David Tennant for the win!), a trekkie (DS9 because Odo rocked), and a fan of pretty much every Marvel live action movie and DCU animated movie.
She has a wacky imagination and tends to write all over the place. In order to keep up, she only asks one thing—Leave Your Reality Behind to Discover Different and Unique Romance & Erotica.