Yep, one would think I would be used to this time of the year being a maddening, hectic, chaotic period, but somehow I always continue procrastinating and end up madly trying to finish things. In my defense, this year, we have had several pretty serious illnesses in the family...one of which did NOT end well, so it's kind of a gloomy time of the year for the second year in a row.

there are the ongoing projects, like the paracord quality control for Operation Gratitude (which just sent out its 2 millionth box to the soldiers), which realistically ends up with me dismantling the paracord bracelets submitted by enthusiastic volunteers who...don't quite follow the standard pattern. Why is this important? Because the soldiers need to be able to unravel the bracelet quickly...and the pattern is designed for quick unraveling. 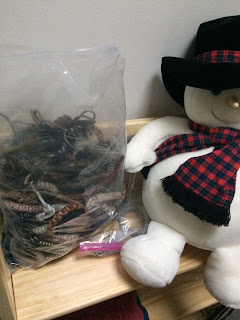 So...Mr. Snowden is presiding over a bag that has about 1/10 of the number of cords I need to go through. Because I have wrist/hand issues, I have sadly come to the conclusion that it is better to just unravel the bracelets and start over than trying to tug and tighten them up. I was straining my wrists trying to fit that last bit of cord into the loop...and I had to quit for a while because I was exacerbating my tendonitis! 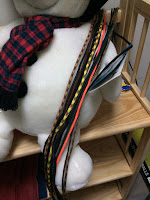 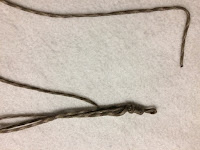 So, now I unravel a group, let them rest for a while in hopes that some of the curl relaxes, and make them into a bracelet again. I've discovered that keeping strong tension on the cord I am wrapping
around and around keeps me from having to tighten quite so much at the end. 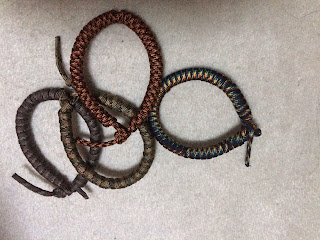 And, voila...the bag of bracelets is started. 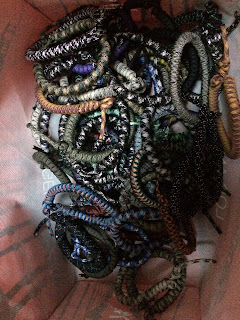 Of course, I am so behind that the ELF'n workshop did NOT get the snowmen assembled for the soldiers' Christmas box, so they are going to get there terribly tardily... 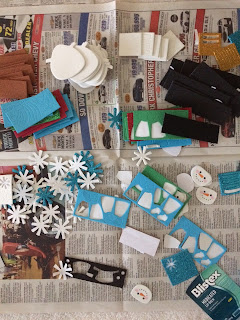 and, because they have adhesive on the back, I have started trying to leave the protective cover on as much as possible--otherwise they end up stuck to everything! 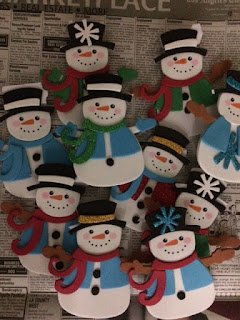 So...MAYBE I'll finally put a box in the mail...and hopefully, they will get it by next year, lol

What projects have you started that will need to carry on into the new year?

Happy Holidays to you and yours!