Stephanie Stewart is a typical sixteen-year-old girl—she loves hanging out with her friends, going to concerts, and sipping mocha lattes. Yup. Just your average teenager . . . Except for one difference—she can see and talk to the dead. In fact, Stephanie helps dead girls who who’ve been murdered or killed, cross over. Just as Stephanie is getting used to her unique “gift”, her mom stumbles into some dangerous witchcraft that backfires and triggers similar abilities in Stephanie’s best friend Cura, and nemesis Hillary. Stephanie already has enough trouble trying to maintain a “normal” life between school and her cute boyfriend Dylan, who happens to have a supernatural talent all his own. But now she has to help her friend Cura and her “frenemy” Hillary cope with their new-found powers as well as cross over two murdered cheerleaders and battle an evil demon who wants to use Stephanie’s supernatural strengths as a free pass to The Other Side. And she needs to do it all while still getting her term papers in on time. She’s definitely going to need an extra-large mocha latte for this. 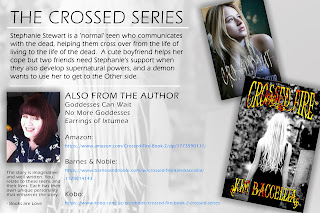 A sudden breeze picked up the trash and leaves that were strewn about, making them dance over the patchwork of dirt and grass. And then I felt it. The itch on the back of my legs that warned me a dead girl was approaching.

A flash of intense light erupted across the darkened sky. Dylan pressed the cold water bottle to his forehead, probably to soothe his headache. Under his breath I heard him mumble about a freaky aura.

At first I couldn’t make her out, but little by little she materialized out of the fog. She looked older than me, maybe college age?

“Is that the girl?” I asked Dr. Anthony. Sure, he’d shown me a newspaper photo, but seeing the ghost in front of your eyes was always different from seeing a picture of someone when they were alive.

Although I hadn’t had a vision of her death the strong impression of daisies resurfaced. I swear I could smell the sweet, fresh scent.

Morgan made her way over to us in a weird sort of half-floating-half-walking way, crossing the Sacramento River. Moonlight shone all around, lighting up the freeway behind her.

The water bottle fell from Dylan’s grasp, but he made no effort to pick it up. He stared at the spirit, and then rubbed his eyes. 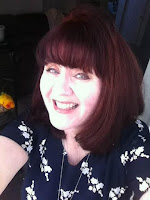 Kim Baccellia has always been a sucker for the paranormal. She blames it on her families’ love for such things as having picnics at cemeteries, visiting psychics, and reading her mother’s copies of the daily horoscope. In middle school, Kim wrote a horoscope column for the school newspaper. It was a huge hit!

Kim’s other published YA fantasies include NO MORE GODDESSSES, GODDESSES CAN WAIT, and EARRINGS OF IXTUMEA. All are available on Barnes & Noble.com and Amazon.
A member of RWA, Kim is currently revising a YA post-apocalyptic novel where a Latina teen questions her cult’s faith. She’s working on a romance set in Tuscany, Italy.  She lives in Southern California with her husband, son, and Damon, her pet cockatiel.