by Jude Pittman and Jamie Hill

Texas PI Kelly McWinter is back in action, mixing business with pleasure on a long delayed honeymoon. Providing security for a nominee at the Country Music Awards sounds like glitz and glamour, but Kelly and Gillian find themselves chasing kidnappers in California and tracking a killer in Las Vegas.


“Yep. Marcy said the pup had his basket right behind the front stairway. The intruder came in through the French doors and he’d no sooner set foot on the front step when the dog went into a frenzy of barking that brought everyone in the house out of their rooms.”

Kelly ran his hand along Jake’s back and leaned close to his ears. “Hear that, boy? One of your pups grabbed that moron’s pant leg and sent him sprawling ass over teakettle down the stairs. Knocked him out cold.”

Gillian, who started grinning when Kelly described the intruder’s retreat down the stairs, was now laughing so hard tears streamed down her cheeks.

“I know it probably scared poor Marcy to death, but I’d give a pretty penny to have a picture of that pup hanging on to that idiot’s pant leg as he tumbled down the stairs.”

Kelly paused and joined her with a chuckle of his own. “Marcy’s assistant Bella called nineoneone and got the police out there pronto. They arrested the suspect, a guy named Lucas Spadina. He’d been picked up a couple of times for trespassing and been suspected in a couple of peeping Tom cases, but nothing stuck. When the cops questioned him this time he claimed Marcy invited him to stop by and see her.”

“Yeah, but you know how it goes. The jails are overcrowded, this guy hasn’t shown any propensity for violence, and of course Marcy couldn’t say for sure she hadn’t casually told a fan to stop and see her sometime.”

“Of course she didn’t, but like I said, it’s one of those cases. He was given community service and probation, plus he’s been ordered to stay away from Marcy and her property.”

“Lot of good that’ll do if he’s determined.”

“Exactly. Which is why Stella made me an offer. Seems Marcy has to travel to Los Angeles in two weeks, she’s being considered for a segment of the television show Nashville, and she’s got a bunch of meetings in LA. After that, as one of the nominees, she’ll be attending the ACM Awards in Las Vegas.”

Gillian fixed him with a direct blue eyed stare, “So?”

New Directions will be $0.99 during the tour. 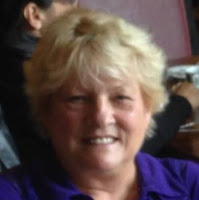 Jude Pittman and her husband John live in Calgary, Alberta. Retired after several decades of working in law firms, Jude is part-owner and publisher of Books We Love. Jude is the author of the Kelly McWinter PI mysteries, Deadly Secrets, Deadly Betrayal and Deadly Consequences.. Jude has also published the novella Bad Medicine

Jamie was born and raised in a beautiful, mid-sized town in the Mid-west. When she's not working at the day job she loves, Jamie enjoys spending time with her family, reading, and watching movies (the scarier the better!) In her ‘spare time’ she can often be found writing, editing, or doing something more mundane like housework.

New Directions by Jamie Hill and Jude Pittman is the first book in the ‘McWinter Confidential’ series. Former policeman Kelly McWinter is using his skills to protect a friend, country music star Marcy Fischer, from a stalker and parlays the assignment (with the collusion of his client) into a honeymoon trip with his wife, Gillian. There are odd happenings in their home region as well, which makes Kelly reluctant to be away, but what starts out as a relatively straightforward assignment rapidly escalates into danger on multiple fronts and the honeymoon may be over before it begins.

This contemporary romantic suspense story evidently starts a new story arc but is connected to a previous series that is sketched out as characters are introduced in this particular tale. The two different cases that Kelly is working on are suspenseful on their own, but I thought things were a little disjointed as characters are constantly introduced but not much background is provided…probably because some of them are well-known to fans of the previous series. I think there is the potential to have plenty of suspenseful stories featuring these folks but I wasn’t quite captivated by them yet, probably because I didn’t feel a rapport with them. Even though I enjoyed the lusty relationship between Kelly and his new wife, it was awkward for me to reconcile his vacillation between dedication to his vocation and to her and her wishes, and I was surprised at the way he occasionally ignored the summons from his friend and potential employer. The issues were resolved a little too abruptly and off-stage as far as I was concerned but I still was pleased by the outcomes. I think this was an entertaining light read that will be enjoyed by fans of mild suspense stories.


A copy of this title was provided to me for review.
Posted by ELF at 12:30 AM