When the only child of a humble medicine woman is murdered for ritual magic, she will call on all the awesome powers of her deity, the Earth goddess, and exact a terrifying vengeance on an entire village. The angry dead shall rise again and a dark cloud of terror will shroud both the guilty and the innocent in a deadly supernatural curse.

There were three doors leading off the living room. He paused again, uncertain which door to try first. The last thing he wanted was for the witch to hear him trying out the wrong door.

That was when the light came on in the room to his right, seeping out from the high gap underneath the shut door. Fucking witch had wakened. Eze cursed and reached for the light switch on the nearest wall, flooding the living room with light from the single dusty bulb overhead. There was no time anymore for caution or delay. He rushed to the door, his movement surprisingly swift, adrenalin fuelled. He turned the knob and pushed the door in with a loud shout, intent on shrieking terror into the heart of his opponent.

His shout caught in his throat. Hot piss gushed out of his bladder, washing his trousers with terror ammonia. A tight band gripped his heart, squeezing the breath out of his lungs. He stumbled back, backwards to the door through which he’d crashed into the room. His eyes, horror-wide, starred at the apparition before him, the albino girl he had last seen inside a secret shrine, drenched in her own blood, her warm heart pulsating inside the witch-doctor’s bowl. Eze moaned, his lips quivering like a child deprived of food. Her cackle hit him like a bullet, sending chills right through his veins to every nerve in his body. 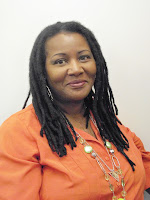 Nuzo is an author of horror fiction from the African continent. She has featured on numerous media platforms, spearheading this new and unexplored horror subgenre.

A British writer of African descent, Nuzo Onoh lived through the Biafran/Nigerian civil war as a child refugee, an experience that has continued to influence some of her works. She attended Queen’s School, Enugu before proceeding to the Quaker boarding school, The Mount School York, England and St Andrew’s Tutorial College, Cambridge, from where she obtained her A’ Levels.

Nuzo holds both a Law degree and a Masters degree in Writing from The University of Warwick, England. Her published works include: The Reluctant Dead (2014), Unhallowed Graves (2015) The Sleepless (2016), as well as featuring in some anthologies. Nuzo enjoys playing the guitar and the piano as well as taking long walks, haunting cemeteries and ancient gravestones. She is a strong believer of The Law of Attraction.
Website
Twitter: @Nuzoonoh
Read the latest review of Dead Corpse by the horror writer, Perry Lake - link

In preparation for her latest release, Nuzo has written a blog for Female First Magazine - link