Path to Passion
by
Nana Prah 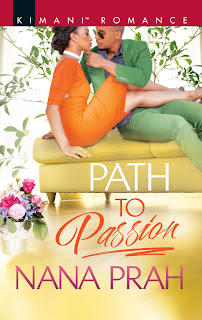 Heir to his family’s global empire, branding genius Miguel Astacio turns everything into marketing gold. Only his best friend’s sister seems immune to his magic touch. Until Tanya Carrington comes to him to save her floundering nightclub. Miguel is ready to rectify past mistakes. But will his supreme sacrifice win the heart of the woman he loves?

Firm hands held her by the shoulders and turned her around before she could grip the handle of the door. When he pulled her in close, she pressed her hands against his chest and tried to push away. She really did, but ended up gripping the lapels of his suit jacket so she could rest her head against his broad chest.

For the first time since the night he’d destroyed her, she released the pain she’d been holding in. The sobs shook her body as he rubbed her back. She cried so hard that his words were lost on her, but the calming vibrations passing into her chest soothed. When the dam finally closed, she sniffled as the hiccups made their unfortunate appearance.

He released her and looked down into what must look like a monstrous mess of a face. Wiping the tears from her cheeks with the pads of his thumbs, her heart stilled when for the briefest of moments, he angled his head as if he was coming in for a kiss. Her captured breath burned within her lungs in anticipation, ready to relive his soft lips pressed to hers. Her nipples tightened at the prospect. Without warning, he stepped away.

Leading her to the couch, he sat her down and handed her a box of tissues. The unladylike sound that came when she blew her nose didn’t make her feel any more comfortable. He went to the refrigerator, took out a bottle of water and twisted off the cap before handing it to her.

Tanya gulped the liquid to reduce the flame of mortification heating her head while she avoided his gaze. Had she actually thought he’d kiss her? She may have lost weight and looked okay, but he could have any woman in the world. Why would he want her? She’d never forget how he’d treated her.

Nana Prah first discovered romance in a book from her eight grade summer reading list and has been obsessed with it ever since. Her fascination with love inspired her to write in her favorite genre where happily-ever-after is the rule.

She is a published author of contemporary, multicultural romances. Her books are sweet with a touch of spice. When she’s not writing she’s, over-indulging in chocolate, enjoying life with friends and family, and tormenting nursing students into being the best nurses the world has ever seen. Nana loves to connect with her readers on Twitter @Nana Prah and Facebook at Nana Prah, author.