ONE tropical island.
Placida Island’s gentle ocean breezes and rolling surf beckon to those who wish to reside in remote tropical serenity.

TWO men living in self-imposed exile.
Wearing twisted ropes of mutilated skin on his back and carrying devastating damage in his soul from severe childhood abuse, Matthew North lives alone in a rustic cabin on the shore, avoiding human contact.

Gender fluidity his perceived “crime” against family and friends, Vedie Wilson flees his childhood home so he can freely express his identity.

THREE persecutors seeking their warped view of justice.
Vedie’s past refuses to stay in the faraway city he left behind when family members, intent on forcing him to change, steal him from his island home.

TOO MANY scars to count.
Their beautiful faces masking deeply scarred souls, Matt and Vedie live in hiding from the world and each other.

Can they unite and embrace each other’s painful pasts, leaving the scars behind to find love?

“The least I can do is cook you a decent breakfast.” When Mateo comes into the kitchen, I’m frying eggs in a pan. “After all, you saved my ass last night. And you’ve done it two times over.”


He’s naked except for a white towel tied around his waist. His wet hair falls right to his shoulders—still tangled from the shower—and he’s giving off this serious Tarzan vibe. He’s also sizing me up, probably trying to figure out what kind of mood I’m in today.


“I’m the kind of person who wants to show how thankful he is. Mama raised me right.” That is, until she tossed me out on my ass for being queer.


He sits down at the kitchen table, and I notice the scars on his back for the first time. I gasp, because I know about those kinds of marks. I’ve got a few of the same sort on the backs of my thighs. They’re the kind of scars you earn through hours—or even days—of pain and suffering. They cut deep enough into your skin to scratch the shrunken-up soul inside, making you different than you were before you got them.


Puckered pink ropes of pain written on your skin—that kind of shit changes you.


I don’t say anything about them, because who wants to chat over breakfast about shit like getting the skin whipped off your back with a leather belt? Instead, I come over to the table with the frying pan in hand and slide a couple eggs on his plate and then a couple on my own. “Would’ve made bacon, too, but didn’t see any in the fridge. Gimme a sec, and I’ll grab the toast.” 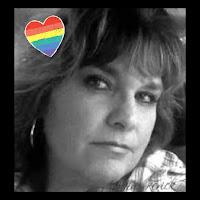 Mia Kerick is the mother of four exceptional children—one in law school, another a professional dancer, a third studying at Mia’s alma mater, Boston College, and the baby finally off to college. (Yes, the nest is empty.) She publishes LGBTQ fiction and romance when not editing National Honor Society essays, offering opinions on college and law school applications, helping to create dance bios, and reviewing English papers. Her husband of twenty-five years has been told by many that he has the patience of Job, but don’t ask Mia about this, as it is a sensitive subject.

Mia focuses her stories on the emotional growth of young people who are challenged by the circumstances of their lives and relationships. She has a great affinity for the tortured hero in literature, and as a teen, Mia filled spiral-bound notebooks with tales of tortured heroes and stuffed them under her mattress for safekeeping. She has NineStar Press to thank for providing an alternate place to stash her stories.

Her books have been featured in Kirkus Reviews magazine and have won Rainbow Awards for Best Transgender Contemporary Romance and Best YA Lesbian Fiction, a Reader Views’ Book by Book Publicity Literary Award, the Jack Eadon Award for Best Book in Contemporary Drama, an Indie Fab Award, a First Place Royal Dragonfly Award for Cultural Diversity, a First Place Story Monsters Purple Dragonfly Award for YA Fiction, among others.

Mia Kerick is a social liberal and cheers for each and every victory made in the name of human rights. Her only major regret: never having taken typing or computer class in school, destining her to a life consumed with two-fingered pecking and constant prayer to the Gods of Technology. Contact Mia at miakerick@gmail.com or visit at her website to see what is going on in Mia’s world. You can also check in with Mia at Twitter and Facebook.