In his neighborhood, El Martin stands out, and that can be life threatening. Against the odds, he’s managed to graduate high school and then master IT. Now he’s desperate to get a good job to free his drunken dad and himself from the control of gang leader M2 and the drugs he sells. But with his piercings and his slang-ridden speech, El looks and sounds like a Bronx gangbanger, and potential employers won’t give him a second look. So when El hears about Henry Fairhaven, PhD, linguistics researcher and wealthy New York socialite, El takes his life in his hands to escape from M2 and ends up sleeping in the stairwell at Henry’s building, hoping to learn how to speak.

To Henry, who wants to prove himself as a scholar and not merely a rich dilettante, El isn’t only the most beautiful man he’s ever seen—he’s also the key to getting a paper published on Henry’s ground-breaking linguistics methods before a competitor beats him to the punch. But Henry doesn’t tell El the truth, and El thinks Henry’s helping him because he cares.

El’s dreams collide with Henry’s ambitions at the elegant Met Gala, where El captivates a prince of Silicon Valley. But the real collision comes when M2 tracks El down and Henry has to choose between the validation he craves and a future with the man he’s come to love. 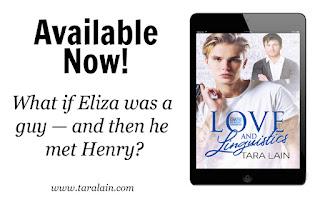 “Love and Linguistics” by Tara Lain is a contemporary gay romance story that follows El Martin as he struggles to break free of the shackles of his background as a gangbanger. Being chosen by noted linguistic researcher Henry Fairhaven as his next project makes El dare to hope that he may be able to create a new life—if he can avoid betrayal and stay alive.

This second story in the ‘Movie Magic Romances’ series is a sweet and sexy retelling of the Pygmalion/My Fair Lady story with a multicultural flavor. I love the twists on beloved scenes from MFL (and spent much of the story humming several songs from the original musical, lol). The author did her usual great job of creating characters who grab our hearts and make us root for their happy ending. Even though I knew what to expect, I was still disappointed by the heedless disregard of poor El after his triumph. The hint of danger added to the allure of this story and I was kept spellbound until the exciting end. A fun and entertaining tale!