In Between Days by Anne Jamison (VET, excerpt, and GIVEAWAY) GFT

In Between Days
by
Anne Jamison

(And the first semester isn’t even over yet.)

The Jocks with their pastel Izods. The Barbies. The loser Burnouts.

High school in the 1980s had rules. Barbies and Jocks can mix. Barbie cheerleaders steer clear of the losers. Punks want to burn it all down.

Samantha Ward doesn't love the rules, but she plays to win. So when a snarky Burnout goes after her in a face-off, of course she fights back. Of course she fights mean. She may not get his sex joke, but she knows he made one. About her. In front of the entire cafeteria. And what's worse, she feels a tingle when she looks at bad-boy Jason.

How could she know her mean girl put-down would launch a war? Or that the school she knows hides a darker world she never even dreamed of?

In Between Days is a pitch-perfect story of first love, friendship, and enemies; of loyalty, betrayal, and the power of secrets. This darkly funny, suspenseful tale is perfect for fans of The Outsiders and The Breakfast Club.

"GRIPPING AND UNPUTDOWNABLE." --Christina Lauren, international bestselling authors of Dating You/Hating You “THIS WAS a bittersweet tumble into eighties high school nostalgia, with all the angst, sexual tension and emotional confusion involved with first love, and so well done it was a non-stop read to the end.… (Oh, and one of the best first kisses I have EVER read...),” says one reviewer

This is a historical novel that contains period language that is, and was then, and should be, offensive.

”So who the hell are you, anyway?”

Everyone laughed. Dylan Dougherty totally lost it, stoned off his ass as usual. Bogart just looked confused. Jason hoped he didn’t look as confused as Bogart. Ever.

”I’ll give you a clue. Seventh grade homeroom. Two seats over. One seat back.” Blue-haired girl made each word a revelation.

”The same. And that is the last time you ever call me Prissy if you want to keep your balls somewhere in the vicinity of your body, Jason Devlin.”

Jason put his hands up in surrender. “Dude.”

Dylan’s eyes widened. “Like from fuckin’ Bladerunner? That is so awesome. Like, dude. Not like I’m calling you that, but with the neon, and those robots and time to die with the dove? Like, ‘Hi Roy,’ and Daryl Hannah goes all apeshit on Han Solo’s ass?”

“I couldn’t have said it better myself.” Pris’s eyes narrowed at the end of sentences like punctuation.

Dylan looked at Pris like she was an angel come to speak only to him.

Jason shook his head. Prissy in Pink to blue-haired freak. His mom used to work in the same office with her dad. Yeah, well. Things change a lot in a few years.

First bell rang and the group started moving towards the entrance. Jason whispered in Shelly’s ear. “Behind the bleachers. After school. Bring a Coke.” She’d understand he’d have something to go in it. She nodded and took off with Dylan to their lockers. Skinny and Not-Prissy turned with Jason.

They passed a knot of jocks and Barbies, no doubt planning some after-school pep enhancement. Typically Jason ignored these kids, but he caught a look off one of them, some muscly dude in a pink polo shirt, that made his blood boil. The kid actually put his arm around one of the girls and steered her protectively out of Jason’s path. Which she wasn’t in.

The vibe the dude was putting out wasn’t even like they were a couple. He was just taking care of a pure young girl whose shadow needed to be kept free of burnout footprints.

Turned out it was very thing Jason needed to focus his free-floating morning rage outwards on a worthy target. I don’t wanna hang with you either, dude, but I don’t feel the need to let you know you’re scum first thing on a Monday morning. Maybe that was part of the problem. Maybe he should feel that need. 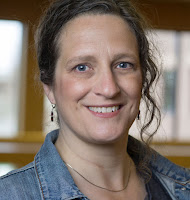 Anne Jamison is the author of three critical books, including Fic: Why Fanfiction is Taking Over the World. She lives in Salt Lake City with her dogs, her son, and an avant-garde poet. She is an English professor, but not the kind that corrects your grammar (unless she is actively grading your paper). In Between Days is her first novel.

Email ThisBlogThis!Share to TwitterShare to FacebookShare to Pinterest
Labels: Anne Jamison, Goddess Fish Promotions, In Between Days, YA, YA historical fiction