Resolutions for an Arbitrary Holiday

Themes: Being true to yourself, New Year’s Eve, holiday

It is a standalone story.

Petter sneaks out of the New Year’s party he didn’t want to go to and treks to an old burial site he’s dying to see. Alone. Without telling anyone on a freezing December night. Without cell service…a huge problem when he twists his ankle.

Someone passes by Isak’s house on the path leasing to the stone ship. When the person never returns, Isak worries and sets off to investigate. What he finds is Petter, a pack of sparklers, and an instant connection.

Under a starry sky, they learn they have a lot in common. Will the attraction burn hot and fizzle out like the fireworks going off over their heads when they return to the real world? Or will it deepen, grow, and turn into something real? Something everlasting like the stone ship?

“Did you come here to ring in the new year?” He nods toward the bottle still positioned between my legs.

“Yeah. I’ve always wanted to visit this place and since I was dragged to the village, it seemed like a good idea at the time. I even brought sparklers.” I pull them out of my pocket, holding them up for him to see.

“Bubbly and sparklers by the stone ship. Sounds like the perfect New Year’s celebration to me.”

I stare at him. He sounds serious enough, not like he’s mocking me. And he doesn’t know me, so he won’t know what buttons to push to get me to agree to do shit I don’t want to, like my friend Jonas, who’s the sole reason for me being here. “You can’t be alone on New Year’s Eve, Petter. Only losers and people with no friends stay home alone on holidays. Besides, you don’t want Maja to think you’re not her friend, do you?” Bastard played me and used his girlfriend to get me to agree, knowing how much I like her. More than him, most days.

But this guy, this stranger, seems honest. “You really mean that?”

“I do.” He grabs the bottle and takes a swig, his face scrunching up in a grimace.

“Yeah, I know,” I snicker. “It’s vile. Serves me right for grabbing someone’s bubbly from the fridge before heading up here.”

“…too sweet,” we say simultaneously.

“Listen. What do you say we ring in the new year a bit early? New Year’s is just an arbitrary mark of the passage of time invented by humans anyway, so who says we can’t do it now? Light some sparklers, tell each other our resolutions. Try not to barf as we drink more of this.” He holds up the bottle. “Then I can help you down. Call a doctor if you need one. Or take you back to your friends if you prefer. I assume you’re at the Andersson house for the party?”

I raise an eyebrow. “How did you know?”

“It’s a teeny tiny village. Everyone knows what’s going on in their neighbors’ houses.”

“It has its downsides, that’s for sure. But I’m mostly fine with it.”

“Okaaaay.” Because surely, he doesn’t mean the neighbors know everything? Not what other people have in their nightstands and stuff? Ew.

“So what do you say?” He nudges his knee against my leg.

“Sure. I approve of the plan.”

Isak removes his gloves and holds out his hand. “Let me light the sparklers. Did you bring a lighter?”

“Yeah, hang on.” I dig into my pocket without taking off my mittens—my fingers are pretty cold—until I find it. “Here you go.”

“Awesome. Are you the kind of person who makes resolutions?”

“Usually not.” I accept the lit sparkler he holds out to me. I’ve loved these things since I was a little kid, even more than fireworks, and up here, in the howling wind with a sky full of stars above my head, in the company of a kind stranger and huge ancient stones, they’re more beautiful than ever.

“But this year is different?”

“Yeah. I’m doing some…significant changes in my life this coming year, so I thought ‘why not?’ It can’t hurt, right? Even if I agree with you about the arbitrariness of this so-called holiday.”

“Sure. It’s not a thing we celebrate because of some natural phenomenon, like the solstice. It’s just to mark that the Earth has done another lap around the sun. I mean, that’s great and all, but why do we need to celebrate it?”

Isak’s face lights up in a wide grin. “Yes! This is what I always say when people complain because I refuse to embrace the spirit of the holiday.”

I return his smile. “Exactly!”


Nell Iris is a romantic at heart who believes everyone deserves a happy ending. She’s a bona fide bookworm (learned to read long before she started school), wouldn’t dream of going anywhere without something to read (not even the ladies room), loves music (and singing along at the top of her voice but she’s no Celine Dion), and is a real Star Trek nerd (Make it so). She loves words, bullet journals, poetry, wine, coffee-flavored kisses, and fika (a Swedish cultural thing involving coffee and pastry!)


Nell believes passionately in equality for all regardless of race, gender or sexuality, and wants to make the world a better, less hateful, place.


Nell is a bisexual Swedish woman married to the love of her life, a proud mama of a grown daughter, and is approaching 50 faster than she’d like. She lives in the south of Sweden where she spends her days thinking up stories about people falling in love. After dreaming about being a writer for most of her life, she finally was in a place where she could pursue her dream and released her first book in 2017.

Enter the Rafflecopter Giveaway for a chance to win

a choice of one of five ebook copies from Nell's backlist 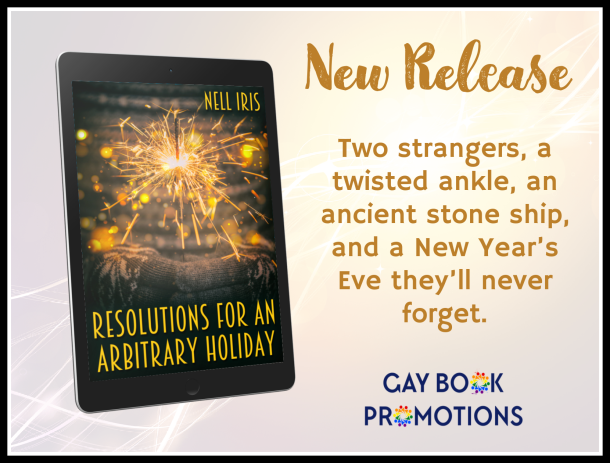 Resolutions for an Arbitrary Holiday by Neil Iris chronicles Petter’s New Year’s Eve decision to visit somewhere he’s always been interested in, with disastrous results…until Isak’s intervention, that changes the night to something worth celebrating.

This short and sweet contemporary gay romance reminds us to celebrate and accept our differences. I love that it shows how decisions can have far-reaching effects (and haven’t we all beaten ourselves up over poor decisions?) and unexpected benefits. The gentle evolution of the relationship between these two guys and the genuine caring that shines from Isak’s pores made me feel warm and fuzzy while reading this story, and I love that they can be awkward but free to be who they are. There are great images (“It’s extremely difficult being romantic when we’re two marshmallows rolling on top of each other, trapped underneath a net.”) and I connected with both characters immediately because of their self-deprecating personalities and their abilities to laugh at themselves. I have definitely been in search of feel-good stories the past few months, and this was a perfect for my mood.