It is my pleasure to share a guest post by author Rachel Woods, who shares with us some of her journey.


ELF:  What was the most difficult thing to overcome on your path to becoming a published author and how did you conquer it?

RW:  The most difficult thing I have had to overcome on my path to becoming a published author would have to be my own hesitations, reservations, apprehensions and lack of confidence. For most of my life, writing had mainly been a hobby that I kept to myself and shared with no one, except for my sister, and occasionally, a close friend. I was plagued with lots of self-doubt. I doubted that I could really write as good as I thought I could. I doubted that people would even want to read anything that I’d written. I doubted that I could actually finish a novel—for years, I would start projects with the best intentions of completing them, but then my interest would wane. I’d put the project aside and start on something new. But, soon, I’d grow frustrated and disinterested in the new project. I realize now that I never finished anything because if I did, I would feel obligated to try to get it published and that would bring about a whole new set of fears I didn’t want to face.

But, in late 2013, I decided to take a chance on my dreams of publishing my books. As a personal injury legal assistant, I have been witness to situations where people have been devastated and lost everything because of horrific accidents. Many of the clients have had their lives changed, irrevocably, in the blink of an eye. Part of personal injury representation involves telling the jury about things a client will never be able to do again because of life-altering injuries sustained in the accident. I realized that I didn’t want to have any regrets, or get to the end of my life and wonder, what could have happened if I had tried to publish one of my books. And so, I pushed aside all the fears and self-doubt, and stepped on the path of becoming a self-published author. I can say that I’m so glad I did, and that I have no regrets because what could have happened actually did happen.

Trying to rectify the mistake that unleashed his dark past, Sione runs to the rescue of a beautiful woman staying at his resort, saving her from a brutal attack … The sly beauty who doesn’t want a hero is no damsel in distress, considering the suspicious circumstances she seems involved in. He should stay away from the beautiful liar, but something about her makes him want to forget his doubts and do anything—even if it means relying on his violent instincts—for a chance to be with her.

Spencer froze, still bent at the waist, staring at the floor, trying to ignore the prickly heat rising up her neck and the sound of Sione’s voice, which gave her a warm shiver.

Standing, struggling to cover herself with the sarong, Spencer took a step back as Sione walked into the dressing room, filling it with his size and strength, crowding her, and a sudden attack of claustrophobia battled with a warm sensation starting deep below her navel and snaking southward toward the center of her thighs.

“Where is the sales lady?”

“I think she’s helping another customer,” he said.

“Another customer,” Spencer mumbled, still trying to cover herself with the swatch of pink fabric. “That figures.”

“You need a different size or something?”

“I don’t know how to tie this thing.” Spencer shook her head. “I’ve tried and tried.”

“Let me help you,” Sione said.

Smiling, Sione grabbed the sarong from her.

A strange sound erupted from her, something between a squeal and a shriek, as she stood there in her lace bra and matching panties.

“It’s actually very easy.” He moved behind her.

Flabbergasted by his blatant audacity, she shook her head.

Sione maneuvered Spencer’s arms and then wrapped the sarong around her. Shell-shocked, she stood stiff as a board as he worked with the sarong, twisting the ends, bringing them up and behind her neck, and tying them together.

“Okay, there you go.” He turned her toward the mirror.

“Hmm,” Spencer mumbled, turning to the side, admiring his handiwork, vaguely wondering how he did it and how he knew how to do it.

“You really know how to put one of these things on.” 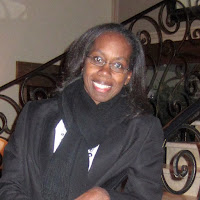 As a pre-teen, a young Rachel quickly tired of the Sweet Valley High Series and moved on to works by Sidney Sheldon, Jackie Collins and Dominick Dunne, which was just the spark necessary to fuel her love of writing. Her first stories were written on a Brother typewriter during long summer days in Texas, where she always had an extra typewriter ribbon and correction tape handy.

Rachel later studied journalism and graduated from the University of Houston where she published articles in the Daily Cougar. She is a freelance writer and blogger with a penchant for melodrama and a frequent traveler to beach locales. Many of her stories take place on the islands, which she has visited around the world.

Rachel writes complex, multicultural stories centered on strong women in jeopardy, fighting for love and their own lives. When not writing, this read-a-holic can be found listening to audiobooks, reading the Book of Jeremiah, or scouring soap opera blogs. Rachel resides in Houston with her three sock monkeys.