Somewhere My Lady
by Beth Trissel

Lorna Randolph is hired for the summer at Harrison Hall in Virginia, where Revolutionary-War reenactors provide guided tours of the elegant old home. She doesn't expect to receive a note and a kiss from the handsome young man who then vanishes into mist.
Harrison Hall itself has plans for Lorna – and for Hart Harrison, her momentary suitor and its 18th century heir. Past and present are bound by pledges of love, and modern science melds with old skills and history as Harrison Hall takes Lorna and Hart through time in a race to solve a mystery and save Hart's life before the Midsummer Ball.

Something about him held her spellbound…the tilt of his head, arch of his brow, glimpse of his profile… She followed his every move with the fixity of an owl.

He turned blue-gray eyes toward her and sensuous lips curved into a smile on his handsome face. Hands down. No contest. He was the hottest guy ever. Her heart beat a thrilling new rhythm.

He circled closer to where she stood rooted in the foyer, not moving a toe, scarcely drawing breath. Did he truly see her backed tremulously against the wall, or did it only feel that way?

Unlike the others in the ghostly assembly, his eyes didn’t skirt past her. He paused in the dance. Bending at the shoulders, he tipped his hand to her in a genteel flourish.

He’d freakin’ bowed. Her jaw dropped. He most definitely saw her. And she sure as heck saw him.

A sparking sizzle jumped between them, awakening her as she’d never been roused before. Even more than when the house charged through her at her arrival. It was as if she were plugged in—to him.

How that could be, she had no idea, but when he gazed into her eyes, time seemed to stop. She spiraled into moonless stars, and back again to this dizzying realm. To him. Even if she were dreaming, she’d never forget this moment. 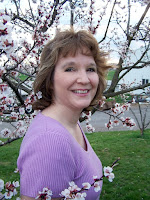 Married to her high school sweetheart, Beth Trissel lives on a farm in the Shenandoah Valley of Virginia surrounded by her human family and furbabies. An avid gardener, her love of herbs and heirloom plants figures into her work. The rich history of Virginia, the Native Americans, and the people who journeyed here from far beyond her borders are at the heart of her inspiration. She's especially drawn to colonial America and the drama of the American Revolution. And she loves a good ghost story. In addition to Young Adult and New Adult fantasy romance, she also writes historical, time travel, and paranormal romance, plus nonfiction.

For more on Beth visit her blog, One Writer’s Way.

Visit Beth’s AmazonAuthor Page where all her books reside