I have the pleasure of having a guest post by author Kristina Mathews, who shares...


ELF: What was the most difficult thing to overcome on your path to becoming a published author and how did you conquer it?

KM: The most difficult thing for me to overcome on my path to becoming a published author was admitting my dream. I wrote in secret for many, many years before actually coming out as a writer in 2010. I had recently turned 40 and knew it was time to either do something about my lifelong ambition to write a book or give up on the idea.

I had finished my first book, but knew it was terrible. Only two words were worth anything, “The” and “End.”’ I started and possibly finished the next book and was working on Swept Away, a book inspired by the real life heroics of my husband and his brother in rescuing someone from the river while fishing one day.

I researched agents and publishers and I found Romance Writers of America (RWA). There was a chapter not too far from me in Sacramento but the next meeting was Opening Day of Little League, followed by my anniversary a month later. So in June of 2010, I attended my first meeting of the Sacramento Valley Rose chapter (SVR).

I was overwhelmed, but also immediately welcomed. People asked me “What do you write?” And it got easier the more I talked about it. I submitted my book to a 3 page read, and got valuable feedback. I entered contests and got even more feedback. My confidence grew, along with my knowledge of craft, branding, editing, writing love scenes, social media, and so much more.

I attended a three day retreat where I learned how to empower my characters’ emotions and self-edit using multi-colored highlighters. I got to know other authors and found my tribe.

Four years later, my first book was published and I attended my first RWA National convention in San Antonio. I met authors who mentored me through online courses, authors who I only knew from social media, and authors I read religiously. I went to my first Kensington party where I met the people who worked so hard in getting my books out on all the platforms. I had my first book signing and got several books signed by my fellow authors. Oh, and I spent several hours chatting with then RWA President Terry McLaughlin while on a layover in the San Francisco airport on the way home. A lot of it was surreal, like when Nora Roberts walked past me in the hotel bar.

Now, seven years later, my seventh book is coming out. I’d like to say it gets easier, but it doesn’t. In some ways, each book is harder because I now know more than I ever wanted to know about marketing, my internal editor is less content to keep quiet when I’m drafting a new story, and it’s much harder to write a synopsis for three books (two of which, I haven’t started on) than it was for the book I’d spent over a year writing, revising, and dreaming about.

Some days are harder than others. But when I’m most discouraged, I have my SVR sisters to support and encourage me—and give me chocolate. I have a husband who forwards me good reviews that show how my books touch people’s lives. And I have characters who won’t leave me alone. They need their stories to be told.

Diving In
by Kristina Mathews

He’s the Swift brother who got left behind, the son abandoned by his father. Now Kyle Swift is a man determined to destroy the whitewater rafting empire built by the half-brothers he never knew, the Swift sons who got the life—and the love—he was denied. Seducing Fisher Jones isn’t part of his revenge, but sharing a bed with the beautiful whitewater instructor is the one bright spot in his otherwise dark plan. That is, if he manages not to fall for the sad-eyed beauty . . .

Fearless when it comes to facing even the most daunting river rapids, Fisher never takes chances with her love life—until the night she gets swept away by a sexy stranger. But when her one-night stand unexpectedly shows up in her whitewater class, Fisher faces her greatest challenge yet: keeping her heart safe from a man determined to put an end to the family business—and the life—she holds dear. . .

When it was his turn, Kyle was determined to make a good impression. On his fellow students, but mostly on his instructor. He wouldn’t be too cautious or too cocky. He would show that he’d been paying attention, soaking in Fisher’s words of encouragement and instruction.

He gave the commands. “Forward paddle. Stop. Left back.”

His crew did exactly as he instructed. The raft was perfectly positioned. Except the current was faster than he anticipated. They were headed straight toward the rock in the middle of the rapid. He used his paddle to make a correction, but he dug in a little too deep and he managed to spin them three hundred sixty degrees around. They hit the rock dead on, and the front of the boat lifted in the air, almost vertical, and everyone went flying into the river.

Well, not everyone. Kyle felt himself being jerked backward and tossed to the floor of the boat like a fish. He scrambled to a sitting position and found Fisher was maneuvering the raft through the rapid.

“I’m sorry. I guess I screwed up.” Kyle couldn’t remember the last time he’d admitted to a mistake. He’d made plenty, but never admitted them. But for some reason, he knew Fisher already knew he was in over his head, and she’d call bullshit if he tried to deny it.

“Help pull the crew back in,” she commanded as they came alongside the swimmers. “We’ll talk about it when everyone can benefit.”

Leia was the closest and Kyle was able to get her aboard; then she helped pull Brett into the raft while Fisher grabbed Nolan.

“Well, that was interesting.” Nolan shook his head and ran his fingers through his wet hair.

“Kyle has just demonstrated the dump truck move.” Somehow, Fisher kept her cool. Made it almost seem normal. “And the important thing is that he was able to account for all the passengers.”

What a loser. Instead of impressing her, he nearly drowned his fellow students. 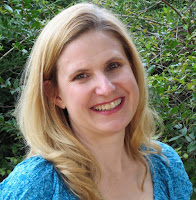 Kristina Mathews doesn't remember a time when she didn't have a book in her hand. Or in her head. But it wasn't until she turned forty that she confessed the reason the laundry never made it out of the dryer was because she was busy writing.

While she resigned from teaching with the arrival of her second son, she's remained an educator in some form. As a volunteer, parent club member or para educator, she finds the most satisfaction working with emergent and developing readers, helping foster confidence and a lifelong love of books. She proudly tells her students that she writes romance novels that they can read when they're older.

Kristina lives in Northern California with her husband of more than twenty years, two sons and a black lab. A veteran road tripper, amateur renovator and sports fanatic. She hopes to one day travel all 3,073 miles of Highway 50 from Sacramento, CA to Ocean City, MD, replace her carpet with hardwood floors, and throw out the first pitch for the San Francisco Giants.