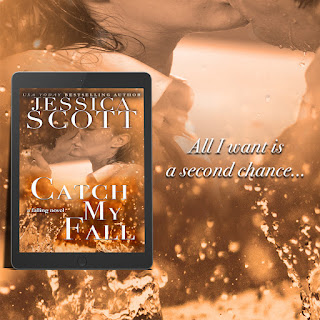 Trapped in the friend zone. The woman who captured his heart when they were deployed in Iraq has never looked back at the time they stole.

Former Army Sergeant Kelsey Ryder has scars, the kind of scars that no one ever sees, no one ever knows about unless she tells them. Working around the guys at the Pint, she’s reminded of everything she lost when she left the Army behind.

But some scars refuse to stay hidden.

One fateful night changes everything and neither of them know if their relationship will ever be the same.

All Deacon knows is that he’ll be there to catch her when she finally falls.

Catch My Fall by Jessica Scott is part of the new adult contemporary and military romance “Falling” series that centers around a small college town where military veterans are dealing with reintegrating into civilian life and pursuing higher education degrees. As always, the author paints a vivid portrait of the challenges and frustrations of coping with the indelible changes war has imprinted on their bodies and psyches and contrasts the lives of those who have experienced so much with those who are relatively naïve to the horrors of war. This story provides the added twist of pitting the veterans against those who will soon face the challenges that will test their ethics and morality but are not quite ready to hear the truths their more experienced brethren are trying to impart.

This couple (Deacon and Kelsey) also gives a glimpse of the horrendous catch-22 veterans are caught in while dealing with an overburdened VA and struggling to cope with their respective issues. The challenges of having any kind of relationship, let alone an intimate one, is sensitively portrayed and I ached for both of these strong people who are struggling to deal with civilian life. I was particularly struck by the frustration of being a female soldier and trying to work within a system that doesn’t even recognize one’s service, let alone value it.

It was delightful to get glimpses of some of the other characters from the series even as one's emotions are caught up in the struggle as we share in the frustrations, sympathize with the low points, and cheer at the little victories. The realism is sobering and reminds us of the sweeping changes that are needed to help those who have sacrificed so much to keep the rest of us safe. I always enjoy the stories penned by this talented author because she provides such compelling stories with realistic characters and this was no exception. I am particularly anxious to read the next story, especially after devouring the teaser at the end of the book, so I hope she has that one well in hand!


Other titles in the series: