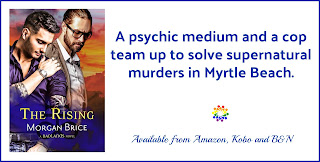 It is definitely my pleasure to share a guest post by author Morgan Brice (Gail Z. Martin). I have had the wonderful opportunity to read several of her books and I am always delighted to see she has published a new story!

The Long and Winding Road...to Publication


My first-ever book (under my Gail name) was The Summoner, the first in my Chronicles of the Necromancer epic fantasy series. That book took twenty years to write. I came up with the characters when I was in college, wrote drafts all the way through graduate school and my early married years, and came back to it on and off in between having three children, multiple moves, and various job changes.


My first publisher was a medium-sized British press, and I did eight books with them. Later on, I also published with a Top 5 New York/London press, with whom I did six books. Along the way, I had short stories in more than 40 anthologies in the US/UK, mostly with small presses. Then in 2018, we made a big shift. We stopped working with the big publishers, took back a couple of contracts, added the Morgan Brice UF/MM/PNR books, and went mostly indie.


I say ‘mostly indie’ because we’re still doing three series with Falstaff Books, a NC-based small publisher, and we have contracts with Recorded Books/Tantor for the audio books of the new indie novels we’re releasing. And when I say ‘we’, it’s because my husband, business partner and frequent co-author, Larry N. Martin, is in the business full-time with me, and we collaborate on everything.


Writing/publishing has become a cottage industry at the Martin house. Our adult kids often beta read for us and help spread the word. At this point, most of our friends are authors, the ones we hit the road with when we go to conventions. Larry handles a lot of the important back-end stuff and the first round of editing, which is how we’re able to do as many books a year as we do. Vacations tend to include book location scouting and research. Dinner conversation usually revolves around plot twists and edits. We have learned, when eating in restaurants, to watch our volume when discussing how to kill someone.


I’m still writing under the Gail name, with a slate of upcoming epic and urban fantasy releases this year, as well as planning to have quite a few new books under the Morgan name. The decision to use the pen name for the romance came about because my Gail books have no explicit sex and the Morgan books do, and I didn’t want to give anyone a heart attack if they picked up something they weren’t expecting! We also publish some series as co-authors under both the Gail and Larry names, and some books just come out under Larry’s name.


I often get asked for advice for aspiring authors. The first thing is to learn your craft. I steer people to the books on writing and publishing by Writers’ Digest Books. They’re good, solid fundamentals. Next, keep writing. The more you write, the better you get at it. Ask for feedback, and look for ways to do better each time. But most importantly, never give up. This is a tough business, and it can take a while to break in. Don’t ever give up. Believe in yourself and your stories, and hang in there. After all, it took me twenty years to become an ‘overnight’ success!


Thank you for having me as a guest! I hope folks will check out The Rising and the whole Badlands series, as well as my Witchbane books.

You can also stay in touch by joining my Facebook Group

Or following me on Pinterest (for Morgan and Gail)  where I post photos of places and people who inspire my books. I’m also on Twitter: @MorganBriceBook and you can get a free Badlands short story (Restless Nights)  and sign up for my newsletter here.