SAKURA SHINTANI is the heir to the Dragon Clan—Japan’s most notorious crime dynasty. But can she keep this fact a secret from the annoying brats of Oniyuri Academy?


She must try to master her demons while trying not to hurt anyone. But having the face of an angel puts her on everyone’s radar… including the arrogant heir to Asia’s most powerful tycoon, KENJIN KIYOHARA. He senses the danger, but Sakura is too interesting to be left alone.

Jin rolled his eyes, settling his gaze back on the girl. He wasn’t surprised with their reaction.


The new girl was hot, but so what? It took more than a pretty face to get his attention. He wasn’t that easy to impress, and he was certain she’d be throwing herself at him anyway. Just like everybody else. He was sure this girl wasn’t any different from the love-crazed hyenas that stalked him.


Jin pushed back his shoulders, seeing her start towards him with her eyes still trailing on the ground.


Already? Jin thought, suppressing a laugh. He crossed his arms, waiting for her to get closer, and sure enough she stopped right in front of him. She was even prettier up close. Asian but with a hint of Caucasian mixed in.


“What?” he asked, smirking. He already knew what she might say: whether he was Kenjin Kiyohara, the sole heir to Kiyohara Industries? The questions were all the same. He thought she would have at least waited until class was over like the rest of them.


“Move your feet. You’re blocking my way,” the girl said in a sharp tone.  She shifted her gaze up at him like a threatening knife. Her topaz-colored eyes darkened, sending icy tremors down his back. He felt as if he’d been hit by a curse as his mind turned blank.


When she finally looked away, Jin was able to regain his senses. He tucked his legs out of her way, and she passed, leaving goosebumps in her wake. His eyes followed her, waiting to see if she’d look back, but she never did. Jin’s hands were trembling. His thoughts became jumbled while he struggled not to look anymore.


What was that? What just happened? This was a first for him. He couldn’t contain himself. His presence had no impact whatsoever. Instead she looked like she wanted to kill him!


Jin took a deep breath, replaying the moment in his head. Who was this girl? She sure got his attention, all right—and it left him in pieces. He fought the urge to look back again.


This girl…Jin thought. There was something about her. He couldn’t shake off the feeling. She seemed dangerous. 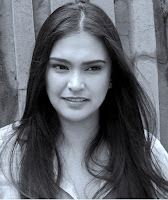 V.C. Buckley was born in an isolated government facility and shipped off to an Island in Southeast Asia where she grew up braving tropical thunderstorms and warding off evil villains. At sixteen she was discovered by an agent and jetted off all over the world. Her stories come from gritty moments of her childhood to the glitz of her travels. She now lives in Manila with her husband, two kids and an herb garden that has hijacked her balcony.