Gods of Merlin
by

GREAT GREEK GODS. THEY ARE COMING.

Foster kid and occasional shoplifter Eowlyn Patience just wants to fit into her Boston high school. When the Sword In The Stone falls out of the sky like a meteor into the middle of London’s Trafalgar Square, everything changes. Then, an enigmatic golden-eyed man arranges for her to attend a school for the gifted in England, and the irritatingly perfect Matt Emrys from science class turns out to be Merlin—the Merlin, King Arthur’s greatest wizard.

Frozen in a cave for fifteen hundred years, Merlin has woken to find the next Arthur. Eowlyn Patience’s mysterious admittance to Avalon Preparatory was not something he foresaw…a disturbing aberration when his most powerful gift happens to be visions of the future.

The race to find the rightful heir rages between deadly gargoyles, wizards, and Regulars, but figuring out the troubled Eowlyn might be by-the-book Merlin’s hardest job yet. She’s altogether the wrong girl. Torn between what is right and what saves lives, will Eowlyn do what it takes to win—even if it means sacrificing Merlin to a god?

A gorgeous underwear-model of a man in a black suit cleaned his sword with a tissue. He threw the bloodied rag on top of the half-man, half-beast. I tensed as he reached inside his coat pocket, but he only took out a clipboard and black sunglasses. He put the sunglasses on. “Eowlyn Patience?”

A little dumbstruck, I nodded at the beautiful killer with blood on his face.

“Pretty name.” He smiled wistfully. “I once knew an Eowlyn.”

The comment knocked me out of my trance. “No one has ever heard of the name Eowlyn.”

He shrugged. “Surprise. Now, you have met me.”

He gave me an amused smile. “I will be your driver today. Don’t forget to grab your bags. We should leave now before you have any more visitors.”

I pointed to the corpse on the floor. “I am not going anywhere with you, serial killer.”

“Is that so? Let me be clear—I just saved your life. More hunters will be coming.” Black-Suit tucked a pencil behind his ear and the clipboard under his elbow. He stepped to the side and pointed at an idling black luxury sedan. “I’ll be waiting in the car. For when you change your mind.” 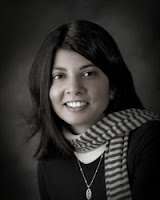 Priya Ardis loves books of all kinds--but especially the ones which make your nose leak and let your chai go cold. Her novels come from a childhood of playing too much She-Ra and watching too much Spock. Her bestselling series, My Boyfriend Merlin, about Merlin going to high school is a YA contemporary fantasy and romance for those like road trips, wizards, Greek gods, and gender-bent quests.