Movie star 102: The headlines are never what they seem.

Quellcrist wasn’t new to fame or the effect it had on a relationship. He’d been married in the spotlight for as long as he’d been famous. But that was before Hale. He knew it was going to test him but even he hadn’t known the toll that months apart would take on his fledgling relationship.

Long days of shooting, different time zones, calls every day dwindled to days without calls, and rumors were all over the rags. Through it all Quell had to battle his own worst enemy but he didn’t know how to win against something inside him. Depression ate him whole and pain took over.

There was so much more at stake than losing his boyfriend, he was losing his best friend. His lifeline, the love of his life. Was there any way to come back from the damage done?

Can they rewrite their ending? 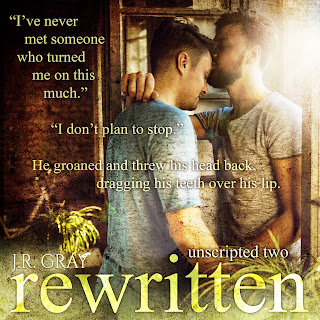 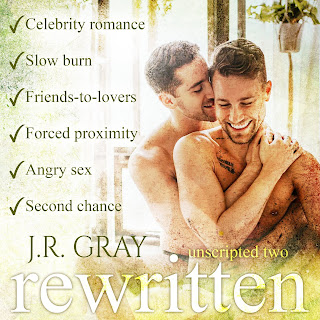 
rewritten by J.R. Gray is the second story in the ‘Unscripted’ series. Hale is no longer a struggling actor and Quell is trying to be less needy, but both men haven’t quite learned how to communicate their true needs. Fortune and fame are understandable goals, but will the price be too high?


This adult contemporary gay romance picks up where the previous book ended. I am really glad I read the first book, because I formed a connection to both guys in that story and was cheering when their journey resulted in them becoming a couple. I understand that a conflict was needed for this book, and I thought there were good elements that showed the downward spiral that mental illness can cause, but I was frustrated by the ongoing angst and unnecessary anguish that permeated this story. I think that I expected more out of both the main characters and their friends, and the whining and dejection became repetitive to me, especially since I would have thought they could find a way to sit down and actually talk to each other!


I strongly suggest that the first book be read before tackling this story, otherwise the switching between make-believe and reality might get a little overwhelming. Despite the somber tone to much of the story, I think the love that these men have for each other does shine through and I was happy that they find a way to ensure this tale remains a romance. There are lovely intense images such as “I hadn’t even realized how destroyed I was without him until he was in my arms again” and I think it’s a good sign that I cared enough about these guys to grumble about how long it took them to actually communicate and to ache at the pain they were experiencing. The chapters alternate in point of view, so make sure you pay attention to the headers (something I don’t necessarily do!), and have a tissue at hand.


A copy of this title was provided for review

Quellcrist King has been playing a part his entire life. The more famous he becomes, the more he hides. The only person he ever let see the real him rose with him from nothing to the very top.

They were the king and queen of Hollywood— and then she wanted a divorce. The only way to survive his depression is to bury himself in work. If he can be a character, maybe he won’t have to remember himself. A gay role can’t be any different than playing a straight one, can it?

But instead of finding solace in the character, he finds it in his costar. Hale becomes his best friend, his lifeline, the light in his darkness. Quell is forced to examine everything he thought he knew about himself while filming intimate scenes with Hale that feel more real than anything ever has before.

He’s lived his entire life following the script. What would life be like unscripted?


unscripted by J.R. Gray features struggling actor Hale who is unexpectedly thrust into the limelight when he is chosen for a series with a big name actor, Quellcrist King, who is surprisingly willing to star for the first time in a gay feature, despite his wife’s misgivings. The chemistry between Hale and Quell is only for the story…or is it?


This adult contemporary gay romance is the first book in the series and gives an intriguing glimpse of the movie industry and the maneuverings required to achieve and maintain stardom. The shift in Quell’s life, sexuality, and philosophy is vividly detailed as is Hale’s journey to stardom and love. I love the instant chemistry between the main characters and between Hale and Ella.


It was a little disconcerting to me to have the chapters alternate in the characters’ points of view because I tend not to read the chapter heading, so sometimes I had to go back to see whose viewpoint was being featured. This, added to the shifts between the roles the guys were playing and the drama of their real life got a little confusing for me, but I was still entangled in their struggles and mesmerized by their story. The gay-for-you and opening the closet door themes provide plenty of angst, and the mental illness issues are sensitively touched on, and the developing romance is lovely to watch. It would be nice to have a little more depth to several of the secondary characters, but I am hopeful that the next book in the series will rectify that.