Naomi's life has been destroyed…

When Naomi Adelman’s crooked politician husband was arrested, her life, and that of her daughters, was destroyed. Divorced and rebuilding her life, Naomi is wiser, stronger, and determined not to let anyone hurt her or her family again. Her new life doesn’t include falling for her charming and good-looking neighbor.

Max bet everything and lost...

Max Bruder bet his entire career on the Adelman story and lost everything. So, he figures that karma has smiled down on him when Naomi moves in next door. This is his chance to revitalize his career. Except the closer he gets to her, the deeper he falls for her. And soon, the line between interview subject and lover blurs.

If they fall for each other, they may jeopardize their chance at a future.

When Max’s true motive is revealed, will Naomi be able to forgive him? And will Max be able to stop the whispers to protect her before it’s too late?

Max shut his apartment door and leaned against it, eyes closed, heart pounding. The sweetness of Naomi’s lips, mixed with the flavors of cumin and cinnamon, and the spice of the wine, was a potent aphrodisiac. Her body had been warm and supple against his, and he’d reacted before he could stop himself. Her humor and personality were an added bonus.

What he wouldn’t give to race next door, throw her onto her bed—or the sofa or hell, the floor—and make love to her all night long. He gripped the keys in his hand hard enough to cause the edges to make imprints in his palm. He took deep breaths to try to slow his heart rate and rein in his desire.

No matter how attracted to her he was, sex wasn’t happening.

She was drunk, and he never took advantage of anyone if they weren’t in complete control of themselves.

And she was the subject of his story. While he would do almost anything for his job, sleeping with her was a line he wouldn’t cross. Bile churned in his stomach. She was exactly the woman he wanted, he’d searched for, and she was off limits.

Plus, she was vulnerable. No matter how confident she might act, hints of old wounds escaped whenever she talked about her past or her family. There was a flicker of discomfort in those amazing blue eyes of hers, a slight twitch of a beautifully arched eyebrow, a hitch of her breath. Someone that exposed needed to be treated with care, especially when it came to matters of the heart.

The heart? He wasn’t in love with her. He was in lust. There was a difference.

Lust was what made it impossible for him not to kiss her. But he wouldn’t go any further. He wouldn’t make her regret anything later on. Because she would regret it and pull away. And he’d never get his story. And if he did succeed, she’d hate him. 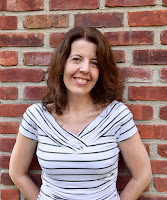 Jennifer started telling herself stories as a little girl when she couldn’t fall asleep at night. Pretty soon, her head was filled with these stories and the characters that populated them. Even as an adult, she thinks about the characters and stories at night before she falls asleep or walking the dog. Eventually, she started writing them down. Her favorite stories to write are those with smart, sassy, independent heroines; handsome, strong and slightly vulnerable heroes; and her stories always end with happily ever after.

In the real world, she’s the mother of two amazing daughters and wife of one of the smartest men she knows. She believes humor is the only way to get through the day and does not believe in sharing her chocolate.

She writes contemporary romance, many of which feature Jewish characters in non-religious settings (#ownvoices). She’s published with The Wild Rose Press and all her books are available through Amazon and Barnes & Noble.