The Foes Between Us by J. M. Robison (Spotlight, excerpt, review, and GIVEAWAY) GFT

The Foes Between Us

In 1842 England, Brynn suspects Reuben's "natural death" had actually been murder because she starts finding cryptic clues and maps Reuben left behind indicating she needs to find Zadicayn, an imprisoned young man claiming to be a wizard from the Middle Ages.

When Brynn frees Zadicayn, her once peaceful life now becomes dangerous when Zadicayn enlists her help to find his magical amulet, but it's in the possession of Reuben's murderers, and they'll kill anyone, even Brynn, to keep it.


Taking several minutes to convince myself that the only way is forward, I stand again and insert the three rubies into the matching three holes in the floor. Is that my heart beating, or some noise coming off the walls?


Hard-knocking clicks begin deep below my feet, like giant metallic cogs revolving under the floor. A grating noise accompanies, the sound moving up to the very stone I’m standing on.


I scramble back, jumping on the altar as if I’ll be safe there if the floor falls away.


My heart shakes my ribcage like a prisoner wanting out of his cell. Nothing has changed in the chamber, but I don’t move. I hear another sound. A thumping. It’s coming from beneath the floor so quietly, I only hear it because I’m holding my breath.

Fear prickles through my body, but I can’t convince myself to run. Transfixed, I stare, even though I’m aware that whatever is coming up might do me harm. I draw Reuben’s bone-handled knife, planting my feet, determined to know what I came here for, what purpose stealing the two pieces of the keys had, whether Reuben’s death was worth it, and whether I’ve just released the monster Cuthbert warned me about.

The thumping rises higher and higher.


I grit my teeth, clench my knife. Reflexes on fire, I’m tensed and ready to spring, ready to run, ready to fight.


The sound stops. The trapdoor flies open with a crash on the floor.


A human arm reaches out. 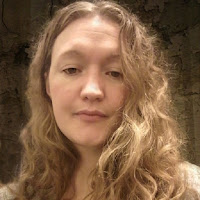 J.M. Robison is a fantasy author who chronicles the events which drive heroes to their knees, dethrone kings, and unhinge history to bring magic back to life. Someday she'll pack the wagon and roam the mountains in search of dragons. She dares to believe in magic. Do you?