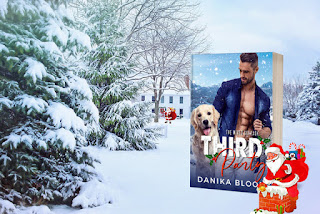 Turns out that old saying is true, that money can’t buy happiness. But it sure can ruin it.

Josh Rhodes was the love of my life. We were all set to do the ‘til death do us part’ thing. But when the video game he’d been working on for years sold for millions, I realized I wasn't prepared for the 'for richer or poorer' part.

All I needed to do was prove that I could still support myself—if I had to. All Josh wanted to do was support me—because he finally could.

But I’d seen what happens when a woman is financially dependent on a man. She gets stuck. Stays when she should leave.

So I took a well-paid temp job overseas. Just for four months. When it became a year, Josh told me not to bother coming home.

So I didn’t. Until I did. Still broke and still madly in love with Josh Rhodes.

This is book 3 in the Mixed Six-Pack series. Each book features a different brother and can be read as a standalone. Never any cheating and HEA is guaranteed!

If you like stories with emotional depth, like books by Nicole Snow and Lauren Landish, you’ll love Third Party. If you love stories that include rescue dogs, grandmother matchmakers, shower sex, and home for the holidays romance set in Vancouver, Canada, this book was written for you.

My gaze was drawn back to the park. Ranger was sitting in front of Paige, blocking my view of her. Had she seen me? If she had, could she tell it was me from that distance, at dusk? Nope, I decided and started to walk away.

I stopped and would have laughed if I hadn’t felt so nauseous. There was no escaping now. I plunged my hands deep into my coat pockets and watched as Paige marched toward me, Ranger now on a leash at her side. She was looking at the ground, shaking her head. I could imagine the words she was mumbling to herself.

About ten yards from me, she finally looked up and was already yelling, “What the hell?” before our eyes met. As soon as she saw it was me, her feet stopped moving but Ranger’s didn’t. He pulled her off balance and she hit the ground again. Hard.

I moved toward her without thinking. You see someone fall and you help them up, right? Instead of taking my hand she rolled away from me and pushed onto her knees.

I looked from Paige to Ranger, back to Paige.

It’s not that I believed she’d never come back—I always expected she would since Vancouver was her home—but for some reason I thought that I’d be the first to know. It made no sense but then neither did the depth of longing I felt to help her up and wrap her in a long, hard hug. Because I was over her. I’d pulled the Band-Aid off a year ago. The wound was healed. The scar tissue was strong. I made a fist and stared at my knuckles to prove it.

“Nana,” Paige said, “she kind of insisted I come over today.”

“How long have you been home?”

Paige got herself onto her feet and stood more than a yard away. It was hard to tell in the light of street lamps, but she seemed to look tired.

“You didn’t call.” God, could I sound any more pathetic?

Her look said more than words ever could have—raised eyebrows, chin tilted down, pursed lips.

“Why did you just try to take Ranger?” She put her hands on her hips and scowled.

“He was standing alone. I didn’t know he was with you.”

She sighed. “Nana said she didn’t have plans this afternoon. That’s why I agreed to come over. I didn’t know you’d be coming, too. Sorry. You want to take him back?” She took a step toward me with her arm outstretched, leash-in-hand.

I shook my head. “She called me a couple of hours ago and said she needed help with her laundry. Right away. She’s never asked for help with that before. I thought, you know with her foot, and she’s getting old, so… here I am. And here you are.”

Paige’s scowl softened, “She set us up.”

“Look, I don’t have to go over. You finish your visit and we’ll let Nana fold her own sneaky granny pants.”

Paige smiled and dropped her arm. We stood close enough to touch, but didn’t. I could not figure out what I was feeling since my body was tingling with a need to hold but my brain was yelling, “Run away!”

I believe in love at first sight, happily ever after, and that the sweetest sex is of the make-up variety. My fifteen-year marriage gives me plenty of “I love you” inspiration for the funny, sometimes steamy, tear-jerky scenes I write to bring my heroes and heroines back together.


Although I was born, raised and live in Canada, I spell like an American, use British colloquialisms and swear in French.LINKS
WebsiteNewsletter sign-upAmazon Author pageGoodreadsBookBub
Instagram
TwitterFacebook PageFacebook Reader GroupBlog/Medium

Third Party by Danika Bloom is part of ‘The Mixed Six-Pack’ series, and features Josh, the video game developer, who has fought for the past two years to get over his first and only love, Paige. Her temporary return for the holidays evokes feelings he’d thought long-dead, as well as rekindles the conflict that forced them apart in the first place.

This adult contemporary romance is a lovely second-chance tale, and it does a great job of connecting to the series while standing alone with no problem. I love to get glimpses of characters from previous stories, so it was wonderful that the previous two couples made cameo appearances. The secondary characters give depth to the story and Nana provides some lighthearted moments as she meddles to bring these two stubborn people to their senses. I love the idea of the video game and appreciated the multi-level conflicts that are addressed throughout the story. One of the things I like most about the books in this series is the realism that acknowledges that life can be messy and complicated and sometimes awkward. I look forward to reading about the other brothers in this series.