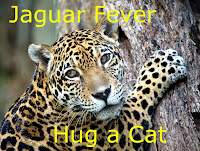 I am delighted to have Terry Spear visiting my blog today with a guest post and a giveaway, just in time to celebrate the release of another book in her yummy jaguar shifter series, Jaguar Fever 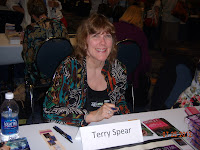 Why Twins, Triplets, Quadruplets in My Shifter Series?

I try to make my stories as real as possible. Many know that I actually have a lot of factual stuff in my stories, true life experiences, or real events that have occurred. I'm often asked to tell about something no one knows. So here goes:

In truth, I do have a lot of multiple births in my ancestry.
In the old days, multiple births were considered the devil's work. Not something that was good. Oftentimes, the babies would die. They were preemies and families had no way to take care of babies who were born too early or who were of too small a weight. They had enough of a problem losing even healthy babies early on because of poor conditions, lack of food, or sanitation.

Many years ago, one of my ancestors had three sets of twins. She also had two other children, non-multiple births, that survived. But not one of her twins did. They were a Kelly family from Ireland, who had moved to Quebec. That was on my maternal grandfather's side of the family. He also had an ancestor, William Playfair, famous mathematician who invented our bar and other mathematical graphs. In Hero of a Highland Wolf, Colleen Playfair is his descendent, American wolf—taking over her Scottish castle and giving Grant MacQuarrie a hard time.

William Playfair was also a twin, but his brother didn't make it. The Playfairs were from Scotland and several were famous for their architectural achievements, geological brilliance, and inventions. William's older brother, John, has a crated named after him on both the moon and mars.

Then my maternal grandmother was a twin. Her ancestors were from Scotland—the MacNeills and Campbells. So you see where I get some of my ideas for stories. Whoever would have thought I might turn them into werewolves??

But I digress. Jaguars, such as in Jaguar Fever, have multiple births also. Two cubs, three, four. In Jaguar Fever, you'll get to see Connor and Maya Anderson, twins, and Wade and David Patterson, also twins. But Connor and Maya also have triplet cousins, two males and a female. The female is in Jaguar Hunt, coming next year. And one of her brothers is going to be stuck in the jungle on a mission when he's saddled with two abandoned jaguar shifter cubs. What's a hot shot Special Forces Golden Claws JAG agent to do?

In Jaguar Fever, I had fun showing the siblings in their interaction with each other. The caring, loyal, protectiveness they have for their twins, triplets. I've read so many stories about twins marrying twins, or losing spouses and the twins from birth live together until they die. It's very touching how so many have a connection like that.

In Destiny of the Wolf, I showed where Lelandi had a connection with her triplet brother and sister, just like so many do even though they live far apart. I watched a program where twins separated at birth end up living in the same town, not knowing the other existed, and run into each other.


Thanks so much for Elf having me here today. Always a pleasure.


One lucky US or Canadian commenter will get a copy of SAVAGE HUNGER, just answer this question and leave a valid e-mail address (contest will close August 10, 2013 at midnight PST):

If you were a jaguar shifter, how would you react if you learned you had a brother or sister or more that you didn't know about?

She's being pursued by everyone, in more ways than one.

Even in an exotic world of humans, jaguars, and tantalizing creatures who shift between the two, Maya Anderson stands out from the crowd. Interest from human suitors is bad enough, but when male shifters give chase, the real trouble starts.

Who's the hunter and who's the prey?

Investigating the black marketing trade of exotic animals keeps Wade Patterson more than busy. When he and Maya both get entangled in a steamy jungle mission, it becomes impossible to tell who is being hunted or who the hunters are. Wade is desperate to survive this deadly game of cat and mouse. But it's Maya's piercing eyes that keep him awake at night.

Bestselling and award-winning author Terry Spear has written over fifty paranormal romance novels and four medieval Highland historical romances. Her first werewolf romance, Heart of the Wolf, was named a 2008 Publishers Weekly’s Best Book of the Year, and her subsequent titles have garnered high praise and hit the USA Today bestseller list. A retired officer of the U.S. Army Reserves, Terry lives in Crawford, Texas, where she is working on her next werewolf romance and continuing her new series about shapeshifting jaguars. For more information, please visit www.terryspear.com, or follow her on Twitter. She is also on Facebook.

One lucky US or Canadian commenter will get a copy of SAVAGE HUNGER, just answer this question and leave a valid e-mail address (contest will close August 10, 2013 at midnight PST):

If you were a jaguar shifter, how would you react if you learned you had a brother or sister or more that you didn't know about?'


Those of you who would like to chat with Terry Spear will be thrilled to discover that she will be at:
Discover a New Love on August 6, 2013 (check this link for more details)

“Jaguar Fever” by Terry Spear is the entertaining sequel to “Savage Hunger” and is another delicious jaguar shapeshifting tale involving the Anderson family.  Maya Anderson has been searching for a little freedom from her overprotective brother, Connor, and now that he has found his mate she thinks she may have her opportunity.  Wade Patterson is a member of the Golden Claw JAG which is an elite force that governs jaguar shifters, and he is tracking an exotic animal smuggling ring when he sees the woman who captured his attention during his last mission and discovers that he has some misconceptions to overcome.  They discover that their personal and professional pursuits may complicate and endanger their relationship and their lives if they can’t find the criminals who pose a danger to jaguars and shifters in more than one country.

This fun paranormal romance combines vivid descriptions of exotic locales with a suspenseful tale that continues to explore the intriguing world of jaguar shifters.  It is lovely to get glimpses of the characters from the previous book as their lives continue to evolve and the Anderson family seems to be growing even more.  Wade is a yummy representative of his branch of the shifter government and it was fascinating to see the convergence with another of this author’s shifter series as allusions are made to the werewolf pack in Oregon and events that have taken place there.  The dangers to be found in the jungle and the inherent power of jaguars are sobering reminders that are strikingly described in this tale.  This is a great addition to the genre as the author’s research into these fascinating exotic felines shines through her story and I look forward to additional tales in this series.


And, don't forget to enter the giveaway:

One lucky US or Canadian commenter will get a copy of SAVAGE HUNGER, just answer this question and leave a valid e-mail address (contest will close August 10, 2013 at midnight PST):

If you were a jaguar shifter, how would you react if you learned you had a brother or sister or more that you didn't know about?'