Fortunately, Elli finds herself with half ownership of a Louisiana plantation. A twisted inheritance has set her up with an interesting future. Unfortunately, Elli no longer believes in planning a future, she just wants to take the money and run.

Ben Bienvenu wants nothing to do with the woman from California who is certain to turn his world upside down. But the conditions of the will that left the property to both of them doesn’t give him much choice. Not if he wants to keep the property that’s been in his family for generations.

A snobby diva rental dog, an impossible will, a nosy Bienvenu family, a distracting Mardi Gras season and a man who thinks he is protecting his son by standing his ground against her… Elli knows that trying to find common ground with this man known as the Cajun Dog Whisperer is going to be an uphill battle.

Both in need of a Second Chance….

“Tell her. Real dogs should have drool dripping from their mouths and hunters walking alongside them.”

“Mais yeah, Ben,” another man shouted in a heavy Cajun accent. “Tell her, a real dawg should fetch a beer from da fridge while da ball game is on. Dat way nobody has to get off da recliner.”

Elli’s head snapped around to the man they were addressing. She noticed that he had a sexy little scar bisecting his lopsided grin. Ben. Ben Bienvenu? Her partner? Donna’s hero. Alligator eliminator.

“A real dog,” another man in neon shouted as he swayed a bit drunkenly. “A real dog should be able to protect your woman and lick his…”

“Whoa, I think she’s got the picture,” Ben said interrupting the rowdy group, all of whom, Elli now realized, were well on their way to having hangovers. The only man seemingly sober was her new partner.

She whirled around to face him, Donna still projecting out from her arms. “So, you are Ben Bienvenu.”

He bowed at the waist and waved the dripping pirate hat he’d just retrieved from the bayou. “At your service.”

“Mr. Bienvenu.” Elli tucked Donna into the crook of her arm, wiped her free hand on her skirt, and extended it to Ben. “I’m Elli Morenelli, I own the Sugar Mill Plantation with you.” 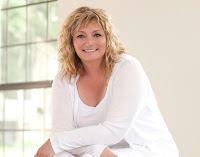 Throughout her life, Tina DeSalvo has filled many roles – daughter, sister, student, wife, mother, journalist. Then one day she took on one she had not planned – breast cancer patient. In an instant her life changed. But as she had done everything else in her life, Tina threw herself into overcoming this role and becoming a survivor.

It was during this time of fighting and healing that Elli

was born. Tina took all that she learned, many of the people she met during the battle and poured it all into a book full of heart and humor. Elli

is the story of getting a second chance at life after breast cancer. It’s not a book about cancer, it’s about a woman who’s had it. It’s a story that will make you laugh and could even bring tears to your eyes and it’s right from Tina’s heart. So much so that she is donating all proceeds from the sale of Elli

to help meet the unmet needs of other women who are going through the same fight she did.

, Tina has continued her Second Chance series with Jewell

. We hope that you will check out Jewell

as well and keep an eye out for Abby coming later in 2016.

Now, as we enter October and another Breast Cancer Awareness Month, Tina is reaching out to share her story and share Elli’s story again. There will be Facebook events and news of other contests and appearances on her website. And all month long she will be visiting blogs to share her heart and her message. She’s looking to give away Care Packages to ten Centers that work with Breast Cancer patients.  You can nominate a Center or Charity that has worked with you or a friend or family member as they went through treatment for Breast Cancer. From all nominated, ten will be randomly picked and Tina will give away a basket full of goodies in the name of you or your friend or family member. Let’s spread the love in October to those that might need it the most.