Maddie McCarthy is single, between jobs, and (oh, the shame) lives with her mother. To make matters worse, she's the maid of honor for her sister's wedding, and desperately needs a date. Then she sees her salvation—Match Made Easy, a service for women in Maddie’s exact position. If she can't find a boyfriend, she'll do the next best thing...

Trent Montgomery isn't actually part of Match Made Easy. He's just doing a favor for his cousin, but one look at the blonde who hired him, and he's totally hooked. Now Maddie thinks that the attraction sizzling between them is just “part of the package.” And Trent is running out of time to prove to her that her date-for-hire might just be her happily-ever-after...

Fortunately, he found her five seconds later. The woman wasn't anywhere near halfway to Maine, but by all accounts, she was about halfway from an embarrassing 911 call.

"What do you think you're doing?" he barked, coming up behind her.

Maddie—whose forearm was wedged up one of his vending machine drop slots—lifted her pert nose at him as if she were royalty and he a common serf. "I'm retrieving my Diet Coke, thank you very much."

He smothered a grin. "Well, before you can retrieve your soda, you must first insert your money."

She huffed out an exaggerated breath. "I understand that, Captain Obvious, and I already did. This stupid machine moved the can just close enough not to fall. It's probably the owner's way of getting extra money."

He bit down on his tongue at that remark, considering he was the owner.

Maddie shoved her arm farther up the slot. "I almost have it."

"Will you take your arm out of there before we have to saw it off?"

Fire sprung in those blue eyes of hers, making her look even more adorable, he decided. Like angry Tinker Bell. "Don't tell me what to do."

Trent gazed heavenward. Great. Not only would he have to place that 911 call when her arm got stuck, but then he'd probably have to call his attorney, too, for when she sued him. It wasn't such a wonder anymore why she needed help getting that wedding date. This woman was trouble with a capital T.

Trying a different tactic, he gently placed a hand on her shoulder and leaned in. "You're right. It's none of my business. Stay in that position all day if you want. The guy on treadmill number two is getting quite the view. One more deep squat and I guarantee he'll be asking for your number."

"What?" Cheeks on fire, she sprung up. She glanced behind her then turned toward him with narrowed eyes. "Hey, that was a dirty trick. There's no guy over there."

"No, but if there were he would have been treated to a dazzling display of hot pink thong. Not to mention that I'm sure my ‘dirty trick’ just saved you at least eight weeks of physical therapy. And by the way, you're welcome." 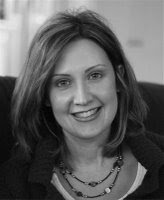 Jennifer Shirk has a bachelor degree in pharmacy-which has in NO WAY at all helped her with her writing career. But she likes to point it out, since it shows romantic-at-hearts come in all shapes, sizes, and mind-numbing educations.

Lately she's been on a serious exercise kick. But don't hold that against her.