The Christmas Cradle by Charlotte Hubbard (Excerpt and GIVEAWAY) GFT

For the peaceful town of Willow Ridge, November presents an early holiday surprise. Stranded in the snow, 18-year-old Lena Esh and her boyfriend Josiah Witmer need more than a place to stay for the night. Lena defied her strict family and their judgmental beliefs to run away with Josiah and have his baby. But she’s starting to wonder if he can prove as responsible as he is passionate. And she isn’t sure how—or if—they can ever find a place to truly call home.

Expecting their own miracle baby, Miriam and Ben Hooley rally the town to help the young couple, and Lena draws strength from their unexpected support. Though trouble may come calling, in this season of joyous rebirth, a little child will lead them. And two couples will see their dreams of forever family come true…

Josiah stepped outside with Naomi and then stood in the crisp winter air, inhaling the savory aroma of the meats he’d put into the grills and barrel cookers early this morning. He opened the two grills nearest the back wall of the café, where he’d been cooking large foil-wrapped beef briskets.

He scowled. When he’d checked them a few hours ago, the coals and wood were at the perfect temperature—and now they were out. And the wood’s not just cold, it’s wet, he realized as he poked beneath the grill rack with his tongs.

Josiah quickly went down the row of cookers, opening them in a panic. He was greatly relieved that the smoke was still coming out of the barrel cooker where his whole hog was roasting—and glad, as well, that the ribs in the gas grills appeared done to perfection. The foil around the briskets hadn’t been disturbed, and as he calculated the time they’d been cooking, he was confident that spoilage wouldn’t be an issue.

But how had this happened? The top vents were open, as they should be—

He spotted a big dent in the snow that had drifted along the windbreak wall. Somebody scooped up snow and dumped it on these coals. But who would tamper with his equipment? No one in Willow Ridge would intentionally ruin the main course of the first meal he and Savilla were serving.

He removed the briskets and ribs from the cookers. Knepp would not spoil their first evening shift! Josiah had no time to hunt down the renegade bishop who’d sabotaged his grills, but he could salvage these meats by finishing them in the oven. He’d take his roasted hog inside right away, too, because for all he knew Knepp was hiding nearby, watching him sweat—or ready to strike again.

“Get the ovens going for me, will you?” he asked Savilla as he began carrying the meat into the kitchen. “We’ve got a problem—but thank the Lord the pig’s done and it’s not been messed with.”

Savilla frowned as she set down her knife to turn on the ovens. “What on earth are you talking about? Last time you checked—”

“Seems Knepp thought he could rain on our parade by dousing two of my fires,” Josiah replied. “We should tell Ben and the other men to keep an eye out—but don’t breathe a word of this while we’re serving dinner. The meat will be fine. No need to get Lena and Miriam and everybody else stirred up.”

Savilla’s face had gone as pale as her pie crusts. “Are—are you sure he didn’t mess with the hog or your other cookers?” she rasped. “If people get sick—” 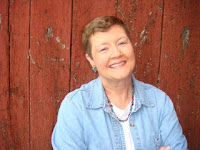 Drawing upon her experiences in Jamesport, the largest Old Order Amish community in Missouri, longtime Missourian Charlotte Hubbard writes of simpler times and a faith-based lifestyle in her Seasons of the Heart series. Like her heroine, Miriam Lantz Hooley, Charlotte considers it her personal mission to feed people. Faith and family, farming and food preservation are hallmarks of her lifestyle. She’s a deacon, a dedicated church musician and choir member, and when she’s not writing, she loves to try new recipes, crochet, and sew. Charlotte now lives in Minnesota with her husband and their border collie.