The Other Side of Hope by R.F. Dunham (VNBtM, excerpt and GIVEAWAY) GFT

I have the pleasure of a guest post from author R.F. Dunham, who answers my question...


ELF: What do you think is the strongest attraction about the genre(s) you like to write in?

RFD: Broadly speaking, I write speculative fiction, which I define simply as fiction set in some world other than our own. It may be a very similar world based on ours, but something about it is different. That is the attraction to me. The chance to create a fictional, alternate world and let the story play out there. Though I enjoy some stories set in the “real” world, I have no desire to write one. Whenever I try, everything feels too literal, bound by the constraints of reality. If I’m going to create a story, I want to create every aspect of it.

The closest I’ve come to writing in the real world is historical fiction. But even then, the setting is still foreign to what we live in every day. So I prefer writing in settings that, while realistic, are entirely fictional. This gives me the freedom to make sure that everything in the story world serves the story.

I think the “otherness” of the world is also the strongest attraction for readers of all types of speculative fiction. Whether it’s dystopian, science-fiction, fantasy, or alternate history, these stories offer readers a chance to get far beyond the normal bounds of reality and truly disappear into the fictional world. I believe that’s what readers are looking for. Not simple escapism, but deep immersion in the world of the story. That’s why stories such as A Song of Ice and Fire (or Game of Thrones for TV-only fans of the series) have become so popular. They offer a detailed, living world inhabited by characters that feel incredibly real and complex. Speculative fiction, in all its many forms, provides unique opportunities in that area. Opportunities that other genres simply don’t have.

That’s the what and some of the why, but I’d like to go a bit deeper. If we like stories from other worlds for the creative freedom and chance to experience something new and different, why is that important? I think it’s because stories in different worlds allow us to say things about our world that we can’t say in our world. These stories can step around the political, economic, and religious barriers we erect and cut straight to the heart of issues by reframing them in a completely different light. When the surface of the conflict is unrecognizable, people who would normally only be able to argue with each other can get to the real heart of what drives their conflict. And suddenly, resolution might not be as impossible as we thought.

That’s the core of my latest novel, The Other Side of Hope. This story flips the world as we know it upside down by making Christians the terrorists and Muslims the influential capitalists. It coats the issues we face in our world in a vastly different, yet instantly recognizable, skin and makes it possible for people to see the other side of a conflict they’ve always thought was purely black and white. By stepping into the world of The Other Side of Hope, my hope is that readers will find a way to see all of their conflicts, big and small, from the other side. And that is what I love about speculative fiction.

You can find The Other Side of Hope at Amazon or wherever great eBooks are sold. I’d love to hear from all of you as well, so feel free to stop by my website at crossfirefiction.wordpress.com or find me on Twitter @DunhamWriter.

The Other Side of Hope


In 732 A.D., the Frankish and Burgundian forces led by Charles Martel defeated an army of the Umayyad Caliphate led by Abdul Rahman Al Ghafiqi and halted the Muslim advance into Christian Europe. At least, that's what happened in the world as you know it.

Step into the world of The Other Side of Hope, where the world as you know it is turned on its head. A world where Charles Martel fell on that field south of Tours, France and was never given his nickname, "The Hammer." A world where Europe came under Muslim rule and Christianity was eventually forced to flee to the shores of a distant land in search of religious freedom. A land where, without support from European colonial powers, they found only conflict and poverty.

In the modern day, this world remains divided. The wealthy Muslim East and the poverty-stricken Christian West are constantly at odds. A single spark is all it takes to ignite fresh conflict and the cycle seems never-ending.

Follow the paths of Ethan Lewis and Hamid Damir as they are put on a collision course with the other side. Will they find hope for a brighter future or be lost in the despair of intractable conflict?

When Ethan saw Elisa turn the corner, his eyes lingered on her face for only an instant. The familiar details of her delicate features filled his mind at once and he wondered how they could have ever become blurred. He would have focused on those features longer, much longer. Would have memorized every inch of her face, from the curve of her cheeks, to her soft nose, to the gentle slope of her chin, to her soft red lips, and shining blue eyes.

He would have stared for hours and maybe he would have never left again. But his eyes were immediately drawn away from her face and to her belly, which was large and round.

Ethan stared at her pregnant stomach for a heartbeat that stretched on endlessly. He blinked once and then hot anger, augmented by the sharp pain of betrayal, flared. He’d been gone for months and she’d gotten pregnant with another man’s child while he was fighting for their future.

He took a step toward her and she must have seen the rage in his eyes because she rested a hand on her stomach and backed away. Seeing her fear broke through Ethan’s anger and he stopped.

“Is it…?” he asked softly, almost breathless.

Elisa nodded once, just a small dip of her chin and Ethan knew it was true.

It was his child she was carrying. He was suddenly ashamed that he could have ever thought anything different. Elisa would never betray him.

Even though the revelation of her pregnancy was a shock, Ethan had to admit that it was possible. He hadn’t truly even considered the possibility that it would happen, that she would become pregnant before they were married. Or maybe he had just assumed that it wouldn’t matter if she did, that they would be married either way and no one would ever know the difference.

Yet here they stood.

Ethan stood just inside the doorway, wrestling with feelings of desperation and duty. Elisa at the end of the hallway, eyes wide with a potent mixture of fear and hope.

Ethan held those eyes with his own for a moment longer, then came to his decision. “I’m going to Turkey. Today.” 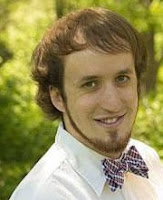 R.F. Dunham writes with one purpose: to take you places you've never been before. That might be a distant fantasy land, the far reaches of space, the future of earth, or simply to an idea you've never encountered. A student of language and culture, Dunham's stories will pull you into complex worlds that challenge your perception of your own surroundings.

After working for over two years as a professional ghostwriter, the time has finally come for him to release his first full-length novel published in his own name, The Other Side of Hope. His short story, “Just a Drop,” was recently published in Nebula Rift Science Fiction magazine and an interactive version of the story is currently in beta testing. When he’s not writing, R.F. can be found playing the trumpet, writing his thesis in Arabic linguistics, or hiking in the mountains of Virginia.

Email ThisBlogThis!Share to TwitterShare to FacebookShare to Pinterest
Labels: alternate history, fantasy, Goddess Fish tours, R.F. Dunham, The Other Side of Hope