AB:  You asked me: “What was the most difficult thing to overcome on your path to becoming a published author and how did you conquer it?”

My first thought, once formed, generated a second thought. The answer may be the title of a future Carmedy and Garrett novel.

I am not one of those people blessed with an excess of self-confidence. What I have is an abundance of imagination. Good for storytelling, yes! But also good for imagining what everyone is thinking and imagining that it can’t be good. I can take a silence and build a wall of criticism. Give me a resting frown (that expression many people get when they aren’t actively smiling) and I can retreat into my shell and agonize over what I did wrong.

Okay, I’m not that bad now, but there was a time when I was shackled by self-doubt. It wasn’t just that I wouldn’t send my work in for consideration to publishers or magazines. I wouldn’t share my work with anyone who might give me much needed but feared constructive criticism.

There was one thing I had besides imagination to get me through this stage of my writing career: the need to write. It’s been said before and I’ll say it again. You don’t become a writer to become rich and famous. You do it because you love to write. You need to write. You’re going to write no matter what, so you might as well become good at it.

Once I made up my mind that my ego wasn’t as important as my craft, doubt lost its hold over me. It never goes away entirely, but that’s okay. A little doubt is a tonic for self-improvement. It’s almost medicinal. However, like most medicines, doubt is deadly in high doses.

Kate recently inherited half her father’s private investigation company and a partner who is as irritating as he is attractive. Kate has been avoiding Jake Carmedy for years, but now her life might depend on him.

Kate and Jake are on the hunt for a serial cat killer who has mysterious connections to her father’s last police case. Kate’s father had been forced to retire when he was shot investigating a domestic disturbance. Is the shooter back for revenge? And is Kate or Jake next?


“Have you been up all night going through Joe’s stuff? You should get some help with that so you don’t dwell on it so much.”

I wanted to snap at him. It was my job. I was his daughter and executor of his estate. Magnus would round up a posse when it was time to move things, but it was my job to sort through the remains of my father’s life.

Before I started to rant, I did a mental check and decided that it wasn’t an appropriate response. Some of my feelings must have shown judging by the expression on Carmedy’s face.

He shook his head.

“I’d order you back to bed if I thought it would work.”

I forced my tired eyebrows to rise.

“I am the senior partner. And you’re the one who put my name above yours on the door.”

I looked at the mistletoe. Peace. It would be a lot easier to maintain if we collaborated instead of butting heads.

I took my coffee to the couch. This was where my father seated clients when he wanted to make them feel comfortable. I curled up at one end of the three-seater. Carmedy sat at the other end.

“I was going through one of Dad’s case files. I knew that his last police case involved domestic violence. I remember reading the papers at the time. There were conflicting reports of the incident depending, I suppose, on who provided the information to which reporter. I tried to sort it out while we waited for my father to come out of surgery. I figured I’d come up with a theory and Dad would tell me if I was right or not.”

“Assuming he knew. Trauma often causes the victim to block out events immediately before, during and after the event.”

Sometimes I forgot that Carmedy was a combat veteran and had been through his own medical and emotional trauma.

“You’re right. Like my father said after the surgery, we constantly train for the moment we hope will never come, when we need to act without thinking about it. And a good job too.”

“He said all that after surgery?”

“I didn’t say how long after surgery.”

Carmedy smiled back. I wondered if I could get the florist to source me fresh mistletoe year round. 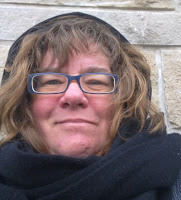 Alison Bruce has had many careers and writing has always been one of them. Copywriter, editor and graphic designer since 1992, Alison has also been a comic store manager, small press publisher, webmaster and arithmetically challenged bookkeeper. She is the author of mystery, romantic suspense and historical western romance novels. Three of her novels have been finalists for genre awards.

Alison Bruce is also a regular contributor to: