Stare Him Down by Riley Murphy (Excerpt, review and GIVEAWAY) GFT ADULT title

Stare Him Down
by Riley Murphy
ADULT title

This is Michaela and James’ story…

When he agreed to walk away from the lifestyle for her, he never expected she’d subversively push him back into it. Until she did…

After tragedy stole the only man James Barrington looked up to, his perfect and orderly life hit a brick wall. One minute he was the right-hand man to the owner of the company, and in the next he was the boss fighting to stop a hostile takeover the only way he knew how. He needed to marry his late mentor’s over-protected daughter, Michaela Donavan, and stay married to her until the threat to the company was averted.

While they were together, James had no intention of disrespecting his in-name-only wife by remaining entrenched in the lifestyle. For the time being he was prepared to walk away from his Dom-like pursuits. He had to. Michaela was the opposite of everything he embodied. She was soft, where he was hard. Gentle, when he favored rough. She was refined and elegant. The epitome of a virtuous woman, and he wasn’t going to do anything to change that. Circumstances may have forced them to enter into a marriage of convenience in order to keep her father’s legacy alive, but the moment that legacy was secured they’d both be free to go their separate ways.

Michaela knew this may be her only opportunity to finally get the one man she has always fantasized about. She’s spent years studying him. Idolizing him. Wanting him in a way she wanted no other. And now? Well, her father always told her to seize whatever good came out of the bad, and Michaela was ready to do just that. Heartbroken over what happened, and faced with the task of saving the company, she sees James’ sensible offer as the perfect solution. A way to achieve two things she desired most at one time. James may consider this a marriage of convenience, but she’s determined to covertly change his mind on the matter.

One submissive tease at a time.

Maybe if James had been a different man he wouldn’t have noticed her subtle actions. Maybe if he was any other guy he could have overlooked them. Truth be told, he might have had a fighting chance if each “accidental” midnight encounter didn’t fire his blood and call to the Dom in him to come out and master this beautiful woman.

He couldn’t do that. This was Michaela Donavan. The innocent vanilla who had no idea what her sultry actions were doing to a seasoned Dom like him. This was no time to let desire get in the way. He had to maintain control and stay focused in order to save the company. Surely, once this happened he’d able to put aside the wickedly dirty thoughts her unintentional actions inspired in him before it was too late and he acted on them.

Michaela wasn’t going to give up. But with the prospect of their arrangement coming to an end before she succeeded to re-Dom him in her direction, she knew what she had to do.

She had to go submissive on him.

She closed her eyes and softly banged her head against the door. If she didn’t get the romantic ball rolling with him soon, her every chance with him could disappear. She hated having to throw Logan in the ring every time to get a reaction from James, but damn, how else could she…?

Suddenly another idea came to her.

She opened her eyes and looked down at the package. Did she dare?

The sounds of James moving around in the room next door cemented her decision. Absolutely. She’d do it.

In fact, by the time she’d washed up, unpacked the box of toys, and had given them a thorough going over, she’d convinced herself that James had really left her with no choice in the matter.

James got into bed and was determined to push thoughts of his in-name-only wife out of his mind. He was ready to count imaginary sheep, pennies, bouncing balls, real balls—damn—a picture of himself stationed quite happily between Michaela’s legs as he slammed into her over and over materialized—no.

“Think sheep. Count sheep. Sheep, sheep, sheep,” he whispered. Hoping to use this power of suggestion technique to his advantage. And it was working. He was slowly drifting off to sleep watching the…mechanical sheep? He tried to sink deeper into oblivion by overlooking the gears and metal parts that made the robotic animals leap effortlessly across the starlit landscape in his mind until... He opened his eyes and stared at the ceiling. Why was he dreaming about mechanical—?

That soft moan woke him right up, and when he snapped into a sitting position he knew why he’d been dreaming about machines. Mickey had opened her package and if he didn’t miss his guess, that was a Hitachi humming away. 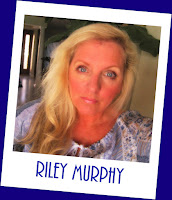 Riley Murphy writes sexy, humorous, and emotional romance, happy ending guaranteed. An optimist, she believes life is amazing, people are complicated, but in a good way, and we should never stop learning. Riley currently calls Florida home with her gorgeous husband. She has two phenomenal kids, one adorable-to-the-max grandchild, and a very bossy pooch.

When Riley’s not working she enjoys reading, oil painting, and getting to the Sunday crossword before anyone else does, so she can fill-in all the easy answers first, and pull the smart card with the family.

Writing books
Connecting with readers
Doing giveaways for her readers

Laundry. Seriously. She’d rather slam her fingers in a car door than do the dreaded bleach load.

One wonders if Ms. Riley is in the sex therapy and marriage counseling business as a day job. The D/s part of this story is Fabulous.

If Riley wasn’t an author she’d be an international spy with top-level security so she could have a peek at Area 51 and decide for herself if those green guys are for real. Failing that, she’d likely go with chicken sexer.

You can visit Riley at the following links:

This sizzling story combines a mystery that follows machinations in the business world and a slowly evolving sensual relationship between two individuals who vacillate between showing their true desires and acting according to conventional rules. I initially was frustrated with the time progression as little scenes are presented showing encounters between the main characters over a series of years but I did like watching the shift in dynamics between them. There are deliciously spicy scenes depicted but sometimes it felt like being given a glimpse through a keyhole as the sensuality intensifies vividly and suddenly dials back to the pragmatic. The wonderfully comedic scenes counteract some of the intense emotionalism (the vision of three Doms in costume comes to mind). I confess to still being a bit confused about what was truly going on in the company and would have liked a little more comeuppance for one particular character, as well as a better explanation for the exceedingly extravagant purchase at the end of the story other than as a very expensive carrot. This was an entertaining and sexy story that is part of a series yet can be read as a stand alone.