I have the pleasure of a guest post by author MH Snowy, who answers the following question...


ELF: What is the strongest attraction about the genres you write?

MHS: There are many genres. So far I've written in a handful, with more to come. My stories meld genres. The 12Nights of Jeremy Sunson combines science fiction, action, a bit of coming of age drama, tragedy and thriller elements.

Being a short story, We Three Laws of Robotics Are, mixes only science fiction (well, it is about robots) and detection. My first novella In Harm'sWay, described as epic fantasy meets the Truman Show, amalgamates fantasy, myth, action, and a few other genres that I can't mention until I release more episodes.

I also have half written story ideas that use horror, heists and dystopia.

When I look at it, this is quite a list. My writing boils down to a science fiction or fantasy setting, a main story line (often action or thriller), and supporting elements. All of my stories have elements of comedy, and are solidly YA.

This reflects my personality. I can't do anything without having fun, and the grittiness of life sends me packing. YA science fiction and fantasy allows exploration of themes in a world where the hero doesn't get beaten down by the sameness of existence; where excitement and action abound.

I'm also interested in unusual heroes, and few of my characters meet the common mold. Jeremy Sunson is an accountant on stress-leave, who always thought he lacked in life. Montague, the magician-trickster from In Harm'sWay, is a sarcastic little man whose friend Harm looks the part of a legend, but might impale his foot if he drew his sword. They have to survive by their wits. And they use their wit. Constantly.

The strongest attraction? Enormous fun-filled worlds with constant excitement and humour, where anyone can be heroic and the cleverest survive. And I'm able to philosophise about truth, perception, quirkiness, honour and anything else I feel like. What's not to like?

The 12 Nights of Jeremy Sunson

Jeremy Sunson is surrounded by crazy. Mrs. Abercrombie, upstairs, is widowed because her husband glued feathers to his arms, jumped off the building and tried to fly. His neighbour, Stuart, has gone mad since his wife died in a freak car accident— his only thread to reality the doomsday machine he’s building and his daughter… and, of course, there’s spacemen in Jeremy’s living room.

Every night, in glorious Technicolor, there’s a battle royal between two high tech assassins who continually blast Jeremy’s apartment to shreds. Each man has one mission: Red wants to kill Jeremy, Blue wants to save him!

Though his therapist insists he’s just having bad dreams—Jeremy knows better. It’s time to fight. He’s sick and tired of being sick, scared and tired! Armed with rare confidence and a baseball bat, this night, Jeremy fights like the crazy man he isn’t!

The 12 Nights of Jeremy Sunson – ride a wave of laughter, fun and sci-fi fantasy all the way to Armageddon!

"Dear me." Dr Smith snapped up his ever-ready notepad, pen poised to take dictation. "Another dream? That is terrible," he said with the grin of a Cheshire cat. "You must tell me all about it."

But Jeremy didn't have the energy to worry about Dr Smith's behaviour. In mournful tones he related the story, unable to understand the way Dr Smith's pen flew across the page, devouring every word that passed his lips. Jeremy shrugged—at least someone was getting a boost from his misery; though what that could be, he hadn't the foggiest.

"Incredible ... I mean, how terrible for you," Dr Smith said, pen not pausing for a moment. "And they didn't interact with you at all?"

"No," Jeremy replied. "Though I'm pretty sure Fin scrunched his mouth at me."

Jeremy's head snapped up. Dr Smith's expression made Jeremy gulp. "Ah, he ... he scrunched his mouth at me. I think. Raised it a bit on one side."

Dr Smith jumped up and paced.

Jeremy followed the muttering figure with his gaze. "Does it ... does it mean anything?"

Dr Smith stopped in his tracks. "Mean anything?" he said with a cry. "Why, it means everything!" He paced anew and then stopped. "Contempt, Mr Sunson. It means contempt."

But Dr Smith continued. "It means you are not acting as Fin expects you to. He—your dream saviour, the alpha part of your personality if you will—showed that you are not assisting him with your behaviour. He is trying to save you and you are not helping yourself. Battle, Mr Sunson! Your dreams are instructing you to battle." 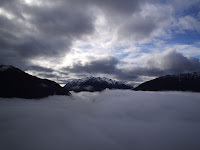 Melindra Hattfield Snowy, a part-time writer and full-time dreamer, who of course prefers to be known as MH. She is the author of In Harm's Way, the first novella in Harm's story published by Pygaso Productions, described as epic fantasy meets The Truman Show.

MH has also penned several short stories including We Three Laws of Robotics Are and The Secret Invasion of George Kranskii which explains how road rage is result the result of an alien invasion.

When not writing or occupied with her dual-identity, MH walks through the mountains with her partner or tries to unravel the secrets of her great-grandmother, an adventuress who disembarked from the French steamer Laos in 1931 seeking to uncover rumours of Mayan temples deep in the heart of the Amazon jungle, and disappeared, never to be heard of again.