The dangers of too much sun!

If you have followed my blog for a while, you may remember that I went to see the poppies blooming a few weeks ago. The following week I worked in the garden, and then...I started having these weird little bumps on my arm...that ITCHED! It progressed to little fluid-filled itchy bumps that began spreading along one arm, up over my face, and a bit on my other arm. I started wondering about chicken pox or something else infectious, as I didn't suffer from most of the childhood diseases but I looked up symptoms and breathed a sigh of relief when I didn't have any of the major signs.

The doctors postulated that it was a perfect storm of things, including an allergic reaction to my having used my hubby's soap by accident. The doctor mentioned the fact that my most severe reaction was on my left side, and said that skin cancer can also present on the left side, because that is often the side exposed to the sun when driving. Unfortunately...no matter what they prescribed or suggested...I ITCHED! Of course, the allergist indicated that calamine lotion (which the urgent care doctor mentioned as something to try) was not recommended any longer because it is also itchy once it dries, the steroid ointments that were prescribed gave relief that lasted only minutes at a time and I was concerned about the potential side effects. So...I can't recommend strongly enough...if you have itchy skin, consider using Eucerin Skin Calming Natural Oatmeal-Enriched Creme. It was wonderfully effective and helped make me less miserable. I wasn't so worried about potential side effects, and it helped my skin heal much quicker and allowed me to sleep at night.

I was feeling better by the time the LA Times Festival of Books came around, but I evidently didn't put enough sunscreen on, and I had a mild recurrence of my bumps, but nothing like the first time. It DID remind me...EARS have to be protected as well, and even more complicated...eyelids are susceptible also.

So, now I know I have to be extremely diligent about sunscreen. I have been using Aveeno ultra-calming daily moisturizer on my face, and although I know the SPF isn't high enough, it seems to have been doing the trick enough to keep things to a dull roar.

For my arms (and I guess my dead-fish looking legs once I start wearing shorts regularly, lol), I am using Coppertone Oil Free Sunscreen Lotion. Knock on wood, there won't be additional episodes, and I will have to remember to renew the application if I am going to be in the sun for an extended time (or in the pool). One caveat, I dropped the bottle right after I got it home and it hit the linoleum and the cap shattered! One of those comedy of errors....the lotion splattered on the walls and started oozing out of the container and I was running around trying to find something to mop it up and frantically trying to keep the lotion from continuing to ooze out. I did write the company and suggest that they consider making the cap less brittle, especially since I can't imagine kids with slippery hands not dropping the container at some point. They graciously sent me a coupon for a new bottle, but I remind you to be careful when handling it!

So, take a note from my misfortune...and make sure you are adequately protected from the sun's harmful effects while enjoying the warmer weather!


And...Happy Anniversary to my beloved hubby! 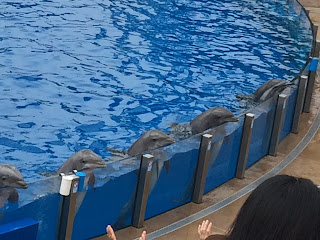