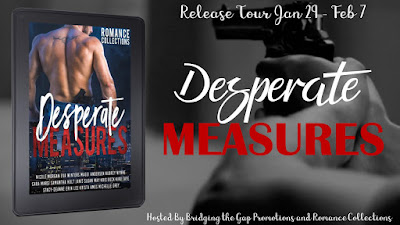 
From mind twisting thrillers to pulse-pounding suspense, this limited-edition collection of today’s hottest best-selling authors has something for all tastes.

Whether you are on the edge of your seat or curled up into a ball with fright, this set from Romance Collections will not disappoint.
Step inside the minds of these characters. Ride along with them on their journeys. Indulge in their action-filled tales of suspense.

The time has come for… Desperate Measures.

Add to your Goodreads

Ricochet by Nicole Morgan  -  One shot will change everything.

Escaping Trouble by Eva Winters – Things can always get worse and for one young girl, it did. Will she live to tell her story? Or, will one mistake claim her life?

Finding Daniel by Maggi Andersen – Sucked into a race against time, Lucy Reed fights to save the man she loves.

Saving Grace by Aubrey Wynne - A Tortured soul, a shattered heart, and a witch’s curse… Can the past heal the present?

Josh’s Salvation by Cara Marsi   -  Lia gave her heart to Josh, but he walked away. Now the two DEA agents are forced to work together again on a deadly mission to bring down a drug kingpin. Trust isn’t easy to come by. Maybe Lia and Josh can have a future together.  But first, they have to survive.

Too Much to Lose by Samantha Holt -  She was meant to be just a job. Until someone threatened her. He wasn’t going to let anyone hurt what was his.

First Date by Janis Susan May -It started so simply – a journey to a contract negotiation. Before it ended, though, Eleanor Sprague is rescued by the famous adventure novelist Mitch Taylor, survives a car wreck, is chased through the woods by a changing assortment of bad guys and discovers a startling truth about herself. And about Mitch…

The Mad Monk’s Treasure by Kris Bock -  Two friends are hunting for a legendary lost treasure in the Southwest… but they’re not alone.

A shy history professor is hunting a legendary lost treasure.
s the handsome pilot who rescued her a hero or the enemy?

Bound to Passion by Kiru Taye -  Marriage has stripped their relationship of its thin, rose-tinted coating, and bared their monochromatic existence for what it was. Will Joshua and Christy get a second chance this holiday season?

The Watchers by Stacy Deanne – From the first time they meet, sparks fly between Sexton and Reese, spawning a sexual curiosity neither can control.

Risking Destiny by Erin Lee – He was willing to dance with the devil herself to save his baby sister.

Rescuing Alix by Krista Ames -  A sexy firefighter and a shy business owner overcome personal fears, only to have it threatened by an angry stalker and a mysterious arsonist.

Presumed Guilty by Michelle Grey – The FBI wants her alive. Powerful people want her dead. Her ex-lover is hellbent on saving her from both. 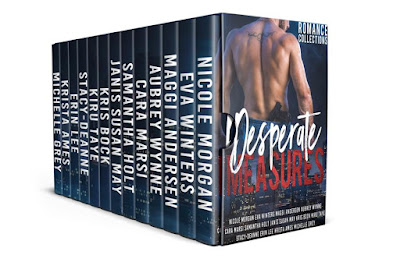