By the Light of Embers by Shaylin Gandhi (VBB, excerpt, and GIVEAWAY)

By the Light of Embers
by
Shaylin Gandhi

It's 1954, and twenty-two-year-old Lucia Lafleur has always dreamed of following in her father’s footsteps. While sock hops and poodle skirts occupy her classmates, she dreams of bacteria and broken bones—and the day she’ll finally fix them.

After graduation, a letter arrives, and Lucia reads the words she’s labored a lifetime to earn—"we are pleased to offer you a position at the University of Pennsylvania School of Medicine." But in the midst of her triumph, her fiancé delivers a crushing ultimatum: forego medical school, or forego marriage.

With fractured hopes, she returns home to Louisiana, expecting nothing of the summer of '54 but sweet tea and gumbo while she agonizes over her impending choice. There, she unexpectedly befriends Nicholas, a dark-skinned poet whose dignity and intellect are a salve to her aching heart. Their bond, initially forged from a shared love of literature, soon blossoms into something as bewitching as it is forbidden.

Yet her predicament deepens when a trivial misunderstanding between a local white woman and a black man results in a brutal lynching, and the peril of love across the color lines becomes chillingly real. Now, fulfilling her lifelong dream means relinquishing her heart—and escaping Louisiana alive.

I snuck a glance at him as he looked into the distance. Something had sprung to life inside me—and for a moment, I ignored all the complications. Suspended in the blossoming evening, I admitted that undiscovered pieces of myself were surfacing, opening before him like flowers.

I followed his gaze. Inverness, a distant castle of pale light, was just visible over the treetops. Beyond it, the ashes of the day clung to the horizon in a lingering afterglow. Above, the sky’s vaulted reaches shimmered.

Suddenly, a flower of green fire bloomed over the swamp. My breath caught as bursts of blue and white spiraled through the night. I leaned forward, enraptured, and Nicholas made a soft sound just before the percussive booms reached us.

Jeweled showers thundered on a stage of starlight, in plumes of green and red, in staccato diamond haloes and fountains of pink. The glistening river reflected each spark, surrounding us with flowers of flame.

I watched, slack-jawed, my heart soaring.

“Magnificent,” he said, each unfurling shower shining in the mirrors of his eyes.

I couldn’t say how long we stood there, but eventually the display came to its final salvo. Fireworks illuminated the night as the explosions reached a deafening roar. Then, as quickly as the show had begun, the last dandelion of blue faded to an incandescent shadow.

I held my breath, unwilling to break the silence. The air ripened, heavy with magic. I looked up at Nicholas with widened eyes.

I nodded. “It was beautiful.”

So was he. It was all I could see now—the line of his jaw, the sweep of his eyelashes. His lips, their lush curves.

I said, “It would’ve been worth it without the fireworks.”

The humid night pressed in, gathered between us like a palpable force, pulling me forward until I found myself leaning into his question. He must have felt it too, because he raised a hand. I braced myself for contact, for his skin to touch mine for the first time. The pale pad of his thumb hovered inches from my cheek. 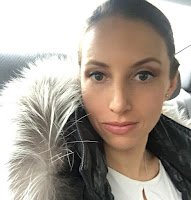 SHAYLIN GANDHI secretly stole her mother’s copy of Clan of the Cave Bear at age ten, and fell madly in love with love stories. Now, as an author, she still can't get enough, and the tales she spins all center around affairs of the heart. To her, that's what makes a story truly worth telling.

Besides writing, she tries to stamp her passport at every opportunity. Traveling has been a lifelong passion, and she’s lucky to have done it a lot. Shaylin and her husband once spent an entire summer living in their van while touring the Pacific Northwest, British Columbia, and Alaska. Her most memorable trips often tie in with writing: her books are usually inspired by majestic places that stole her breath.

In addition, Shaylin practices medicine, scuba dives, plays the piano, and once rode her bicycle from the Pacific Ocean to the Atlantic. She now lives in Denver with her incredible husband, their identical twin daughters, and two adorable rescue dogs. The family can usually be found in the mountains, either hiking up or skiing down.

You can find Shaylin online at www.shaylingandhi.com or on Twitter @shaylingandhi. Please get in touch—she would love to hear from you!