How I Write
by
Robert Sells

Would that I were a more clever writer. Better writers than me start with an outline, a description of characters, a plot. Not me. I start with an idea, the tiniest seed of a story. And then, BOOM, I start writing a long novel, start to finish. But it always starts with a thought, simple and sometimes profound.
Okay, what was the “thought” launching my latest novel, Revelations? My college and graduate education in physics and math propelled me into teaching. Along the way, I had a love affair with astronomy and, in fact, taught a few introductory courses in astronomy. While I admit to being enthralled with both Star Wars and Star Trek, the physics for both simply doesn’t work. There won’t be spaceships whizzing around the galaxy, far too costly. And, heck, if it was true, then where are they? You and I have only seen the Enterprise or the Millennium Falcon type ships in the movies and on television. And, sadly, that is the only place they will show up.
Damn! No alien contact. Heck, no First Contact! Who doesn’t love a good First Contact story? So (here comes the “thought”)… is there a way for alien contact without the fantastic spaceships that don’t exist? Well, yes. Hmm. Maybe.
We could interact with a distant species through electromagnetic waves. Faster than a “speeding bullet” or any spaceship and certainly less expensive. While the technology for such communication is not quite there yet, the science is sound. We just send large, information-packed messages, wait a few decades (or centuries) and get a response. So, we can have First Contact. Hurray. But, let’s face it… long distance phone calls are simply not as much fun as fighting aliens face to face. Hmm.
What we really want is a mano a mano scene. Nose to nose… or whatever counts as a nose for aliens. But… but… how? Ahh. Another idea. Communication through electromagnetic waves is possible so, let’s suppose there is a secret embedded message within the main message from the aliens. Yeah! That’s it! Now, I had it. The seed to start my story. Now, let’s see, how where should I start this story start? At an observatory. Maybe Arecibo. Okay. Got it. I started typing.
And, three years later, I was done. Oh, it took over twenty rewrites, a dozen or so characters birthed and thrown out, ten serious edits. Then I gave it to some friends who just happened to be English majors (not physics geeks) and they helped me clean up the prose. My final reviewer was my wife who, God bless her, found over twenty more errors and made some great suggestions improving the manuscript.
As ever, it was a long, annoying, wonderfully exciting process. In the end I have a love story intertwined with a unique First Contact story. Oh, and big-time scary stuff with strange creatures and edge of your seat battle scenes. All from one little idea… how could aliens get here without spaceships.

Aster Worthington spearheads the First Contact Team who are unraveling a message from an alien race. The altruistic extraterrestrials promise free energy and an excited Earth builds a massive structure called the Dome to house the alien enterprise

Seven years later, no "free energy" and strange things are reported in and around the Dome. When Aster and her colleagues mount an expedition to investigate the interior, they are shocked to find it filled with humanoids having insect-like deformities. It becomes obvious their true purpose is to take over our planet. Now Aster and the scientists are trying to come up with a defense to fend off the invasion. A defense that is tied to a 2000 year old document hidden by the church. But, will it be too late?

“No. There won’t be coincidences in this message, Dr. Stenton,” said Demarco in a dismissive voice. He then went to the podium, which Henry ceded, tapped some keys and a moment later, the ones and zeros of the binary message aligned themselves in the form of a perfect square. With a flourish, Demarco pushed the last button. A black square appeared for every zero in the message and a white square for everyone. A black and white array appeared, rendering a clear, unambiguous picture of a planetary system. One with four planets, the second one from the sun circled.

“My God!” someone shouted from the back. “They sent us a picture.”

Henry smiled and yelled to Louis. “Hey, Louis, I told you a picture would be easy.”

Without taking his eyes off the screen, Demarco asked, “Is that the Lambda system, Dr. Worthington?”

Heads swiveled to Aster. She nodded. “Yes. That is the correct spacing for the Lambda star system.”

“Another large number after the last spacer. Different one, but the same number of bits,” Jeremy announced, speaking loud over the din.

Demarco did his magic again, and a humanoid body filled the screen, strikingly similar to a human, except for a slightly larger head. Their hands had three digits, not five.

Someone from the back shouted, “The Lambdons.” Now the aliens had a face and a name.

Louis, however, scrunched his face in consternation. He shuffled close to the screen, studying it.

Louis turned around, his face worried. “These Lambdons… they look like us.”

“Not exactly like us. They have three fingers and a larger head.”

“Too close,” mumbled the biologist.

The book is on sale for only $0.99
(please check price before purchasing) 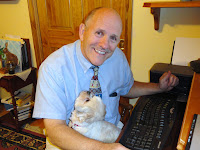 Robert Sells has taught physics for over forty years, but he has been a storyteller for over half a century, entertaining children, grandchildren, and students.  He has written the award-winning novel, Return of the White Deer, historical fiction about Penda of Mercia. His second fiction book, Reap the Whirlwind, was a thriller about the dawn of artificial intelligence and the subsequent decline of humanity.  His third book, The Runner and the Robbery, was a young adult novel about a teenager and his grandfather who had Alzheimer’s disease. Revelations, a science fiction novel, is his fourth book.

He lives with his wife, Dale, in the idyllic village of Geneseo, New York with two attentive dogs who are uncritical sounding boards for his new stories.  He is intrigued by poker and history, in love with Disney and writing, and amused by religion and politics.