April in the Back of Beyond by p.m.terrell (VBT, guest post, excerpt, and GIVEAWAY)

It is my pleasure to present a guest post by author p.m. terrell who shares...


On Writing Mysteries and Suspense

I’ve found myself drawn to mysteries and suspense since I was a young girl. I enjoy reading books that build suspense, causing me to turn the pages because I have unanswered questions that I must resolve. I also like to try and find the clues within the story, particularly when there are twists and turns, and with a particularly good book that has kept me guessing, I’ve been known to immediately read it a second time so I can dissect how the author put the story together. Because those are the books I enjoy reading, I enjoy writing them as well. There is a creative element of course, but also a technical element in building a mystery or suspense properly.

When I began researching my family history, it led me to Ireland and I’ve become incredibly interested in its history. I’ve found even with my historical books, I look for the mysteries of the time and that climactic scene that changes the course of history, not only for my ancestors but for an entire culture. I’ve traveled to Ireland several times, even finding my ancestral home in County Tyrone, Northern Ireland, but my dream would be to live there and write my books in a cottage by the water. It is a magical place, a mystical place, and I’ve felt more at home in Ireland than any other place I’ve been.

When I began writing fiction in the late ‘90s, I found few authors willing to share their secrets of success with me, as though it was to remain a well-kept secret. I promised myself when I became successful, I would help those authors that came after me. I was a co-founder with The Book ‘Em Foundation and worked on annual events in Virginia, New Hampshire and North Carolina that brought authors together to sell their books and attend free conferences on everything from building characters to marketing, and I’ve mentored many more. I hope they, in turn, help others that come after them.

Thank you for having me here today!


April in the Back of Beyond
by
p.m.terrell

Writer Hayley Hunter has arrived in Ireland to complete a book on Irish history. When she discovers the old carriage house she is renting is haunted, she is determined to uncover the truth behind the burned ruins of a nearby manor house and the abandoned British barracks it overlooks. With the assistance of Shay Macgregor, an Irish historian, her quest will take her to 1919 and the Irish War for Independence, exposing the murders of two young men and why their mother, April Crutchley, refuses to leave the back of beyond even in death. With a budding romance and the opportunity to begin life anew, Hayley finds her own life is now in jeopardy as she gets closer to a truth the villagers have long sought to bury. 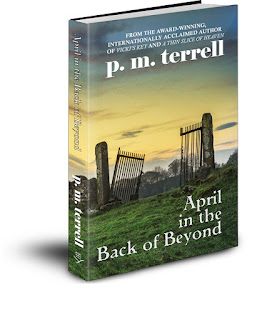 When I heard the soft sobs, I realized I had drifted off once more and in my half-awakened state, I thought the cries were connected to my discordant dreams. I lay there with a groan on my lips not quite ready to spill out and wishing I could simply sleep peacefully before it was too late and I would be forced to arise for the long day ahead. I felt the bedcovers slip away from my bare shoulders and I fought to open my eyes.

When they finally did open, I discovered that I was completely uncovered. The bedcovers had been pulled to the foot of the bed and were shivering inches from my feet as they lay heaped into an unkempt triangle about three feet in height. I blinked once and then twice, my mind not grasping what my eyes were witnessing, for surely it must be a trick of the eyes to think the covers were still moving.

It was then that I realized the soft sobs had continued even after I had fully awakened and they were not part and parcel of my overactive dream state but they were real and they were coming from the direction of the blanket.

“You don’t understand,” came the sound of a woman’s voice, wracked with anguished sobs. “They are still here.”

“No, sweet darling,” returned a weary man’s voice that sounded so close I nearly jumped out of my skin. “They are with God now.”

“I’m telling you they are not,” the woman answered, her weeping growing more tormented. “They’ve never left. They’re still here.”

Within the space of a single heartbeat, I saw myself just a few nights ago, convinced the voices came from outside my window. Then I was pulled into the present to fight the horrifying realization that I was sharing my bed with two apparitions.

I slid my feet away from the covers in excruciatingly slow progress, afraid at any moment my movements would alert the phantoms of my presence. I tucked my feet and knees close to my torso as I came to an uneasy seated position, almost fetal in an attempt to occupy as little space as possible.

The room had become an icebox despite the radiators and I found myself shivering almost in tandem with the blanket. I had no idea how long I sat there, curled against the headboard and pillows, watching the foot of the bed and listening to the disembodied voices that filled the air. But then something seemed to snap inside me, fully awakening me to the present time and despite my fear, despite my trepidation, I grew impatient with myself. I reached a trembling hand toward the bedcovers, intent on pulling them over me to fight the chill as well as reassure me that they were not wet.

But at the precise moment I felt the dampness under my fingers, the sobbing stopped, replaced by a gasp that was not my own. I yanked the covers to the side, determined to discover what mechanical device lay beneath. The material jerked away from me as though I was engaged in a tug-of-war and the gasp was replaced with a woman’s blood-curdling scream and a man’s shouts. 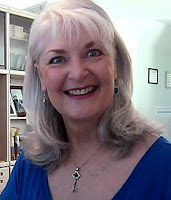 Prior to writing full-time, she founded two computer companies in the Washington, DC Metropolitan Area: McClelland Enterprises, Inc. and Continental Software Development Corporation. Among her clients were the Central Intelligence Agency, United States Secret Service, U.S. Information Agency, and Department of Defense. Her specialties were in the detection of white collar computer crimes and computer intelligence.

A full-time author since 2002, Black Swamp Mysteries was her first series, inspired by the success of Exit 22, released in 2008. Vicki’s Key was a top five finalist in the 2012 International Book Awards and 2012 USA Book Awards nominee, and The Pendulum Files was a national finalist for the Best Cover of the Year in 2014. Her second series, Ryan O’Clery Suspense, is also award-winning. The Tempest Murders (Book 1) was one of four finalists in the 2013 International Book Awards, cross-genre category. Her historical suspense, River Passage, was a 2010 Best Fiction and Drama Winner. It was determined to be so historically accurate that a copy of the book resides at the Nashville Government Metropolitan Archives in Nashville, Tennessee. Songbirds are Free is her bestselling book to date; it is inspired by the true story of Mary Neely, who was captured in 1780 by Shawnee warriors near Fort Nashborough (now Nashville, TN).

She was the co-founder of The Book ‘Em Foundation, an organization committed to raising public awareness of the correlation between high crime rates and high illiteracy rates. She was the founder of Book ‘Em North Carolina, an annual event held in the town of Lumberton, North Carolina, to raise funds to increase literacy and reduce crime and served as its chairperson and organizer for its first four years. She also served on the boards of the Friends of the Robeson County (NC) Public Library, the Robeson County (NC) Arts Council, Virginia Crime Stoppers and became the first female president of the Chesterfield County-Colonial Heights Crime Solvers in Virginia.

Email ThisBlogThis!Share to TwitterShare to FacebookShare to Pinterest
Labels: April in the Back of Beyond, Drake Valley Press, ghost story, p.m.terrell, romantic suspense