Never promise a life that isn’t yours to give.

New York City is decked out for the holidays, and Special Agent Patrick Collins is looking forward to a reunion with his old team when he gets assigned a new case. A human child is missing, and the changeling left in her place causes a prominent witch family to demand justice from the fae.

Meanwhile, continued harassment from the New York City god pack forces Jonothon de Vere to formally establish his own with Patrick. Doing so will mean a civil war within the werecreature community—a war they risk losing from the start without alliances. Making bargains with the fae is never wise, but Patrick and Jono have nothing to lose when a fae lord comes asking for their help.

The Summer Lady has been kidnapped from the Seelie Court, and if they can find her, Patrick and Jono will cement an alliance with the fae. But the clues to her disappearance are found in Tír na nÓg, and the Otherworld has never been kind to mortals.

Venturing past the veil, Patrick and Jono risk losing territory, time, and their very lives while searching for answers. Because the Queen of Air and Darkness knows they are coming—and the ruler of the Unseelie Court has an offer for them they can’t possibly refuse.


A Crown of Iron & Silver is a 107k word m/m urban fantasy with a gay romantic subplot and a HFN ending. It is a direct sequel to All Souls Near & Nigh. Reading the prior books in the series (starting with A Ferry of Bones & Gold) would be helpful in enjoying this one.


Patrick put the grocery bags on the wet ground and dug out his cell phone, never taking his eyes off the werecreatures.


“Yeah?” Jono’s deep voice answered after the first ring, his English accent thick in Patrick’s ear. “You almost home, mate?”
“Downstairs. Got some unwanted visitors.”
Jono ended the call on his side of the line without saying a word, and Patrick put his phone away. None of the werecreatures had moved much, except maybe to huddle closer together under their umbrellas. The stormy weather was shitty, and it was cold, and Patrick really didn’t want to deal with pack issues out on the street. He didn’t want to deal with any of it right now, not after the day he’d had, but Patrick didn’t really have a choice
Less than ten seconds later, Jono yanked open the building’s front door and stepped into the storm. The long-sleeved gray Henley he wore was immediately soaked, as were his jeans. Patrick spared him a glance when he would’ve preferred to let his gaze linger. A wet Jono was always nice to look at, but keeping his eyes on the threat in front of them took priority. 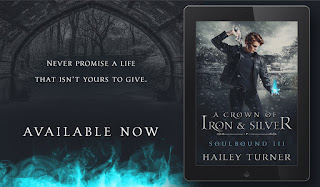 How do you do research for your books?
HT: A lot of reading! Especially for mythology. I have some books that I consult at home, sometimes I go to my local library, and I do a lot of online research.

Is writing your full-time career? Or would you like it to be?
HT: Writing is not my full-time career, and I’m one of those writers who really loves her day job, so I’m in no rush to try to make it a full-time career. Balancing two jobs can be tricky though, and some days I wish I only wrote full time! But I have no plans to do so at this moment.

Are you on social media and can your readers interact with you?
HT: I am on social media! I can mostly be found in my Facebook readers group, Hailey’s Hellions, where I post a lot of teasers and give updates on my books. I have an Instagram account where half the pictures are book-related and the rest are my cats. I love chatting with readers.

Hailey Turner is big city girl who spoils her cats rotten and has a demanding day job that she loves, but not as much as she loves writing. She’s been writing since she was a young child and enjoys reading almost as much as creating a new story. Hailey loves stories with lots of action, gritty relationships, and an eventual HEA that satisfies the heart.


Win one of two back catalog ebooks by Hailey Turner!
Open Internationally.
Must be 18 to enter.

A Crown of Iron & Silver by Hailey Turner is the third book in the ‘Soulbound’ gay urban fantasy series that features werewolf Jonothon de Vere and Special Agent (and mage) Patrick Collins as they continue to deal with the challenges of establishing a god pack in another’s territory, investigating the cases that Patrick is assigned to, dealing with the capriciousness of the gods each is bound to, and becoming embroiled in a fae dispute. In other words, life as usual for them. Now to stay alive and keep everyone in their circle safe. Easier said than done.

I love the sense of responsibility that each of the main characters displays even with the constant provocation being sent their way. Not only are they becoming more comfortable in their respective roles and in their relationship, but also in their interactions with those they care for. Which makes betrayal all the more painful.

Although it is still a bit confusing to parse out the hierarchies among all of the different agencies that interact, it is nonetheless fascinating to watch the delicate dances that take place to both avoid stepping on toes while appeasing the higher-ups—mortal and non-human. One of the things I like most about this series is the way various pantheons are woven together into a multi-layered story that meshes modern society in New York, were-creatures, and fae society.  The meddling gods such as Fenrir and Hermes contrast nicely with other mythical beings such as Cu Chullain and Cailleach Bheur. Throw in an opinionated teen were-dragon who has selective hearing and a penchant for Pop Tarts, the Fae high courts, a mini-reunion between old teammates, and a young child who is not where it should be, and the action is engaging, fascinating, and so much fun.

The questions posed by the situations in this story kept me pondering well after I finished and I was intrigued by a new perspective on changelings. How does one ground a teenager who has to be reminded not to shift inside a building that will collapse on everyone? Who would win if the Greek and Norse pantheons form an alliance against the Fae?

There are several arcs that tie together the stories in this series, so although some of the problems presented in this story are more or less resolved and there is a happy-for-now ending, there are quite a few issues that are still pending. Despite this, I suspect this author has a bit of magic in the blood as well, because I am instantly drawn into this richly textured universe, and although I race through the story because I want to know what happens, I immediately start reading it again once I finish because there are so many vivid scenes I want to revisit. I think the secondary characters are almost as fascinating as the two main stars of the series and I look forward to visiting all of them again and anxiously await more adventures.

A copy of this story was provided for review
Posted by ELF at 12:30 AM