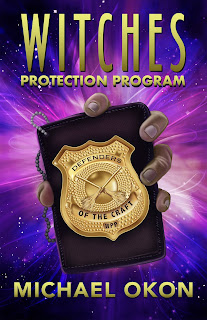 Wes Rockville, a disgraced law-enforcement agent, gets one last chance to prove himself and save his career when he’s reassigned to a 232-year-old secret government organization.

His first assignment: uncover a billion-dollar cosmetics company’s diabolical plan to use witchcraft for global domination, while protecting its heiress Morgan Pendragon from her aunt’s evil deeds. Reluctantly paired with veteran witch protector, Alastair Verne, Wes must learn to believe in witches…and believe in himself.

The narrator filled in more information. “It wasn’t until this land became my land that the government decided to create an organization to protect women at risk. The Davina Doctrine went against everything that the Willas stood for. Even though they ran the risk of persecution, the Davinas chose to work with law enforcement to expose the evil deeds of the rival sisterhood. President George Washington established secret legislation under Title VI of the Control Act of 1792. The law was enacted to protect the good witches that exposed the evil deeds of their sisterhood.”

The screen went dark. There was only a chair in the center of a dimly lit stage. A single spotlight focused on the top of the blond actress’s head. Wes was right; it was the actress he’d suspected. She had a hit sitcom and two Emmys, and there was some recent Oscar talk about her last movie.

“Yes. There are witches. Living among us. They are women who believe in using their power to protect love and life. And then there are some who use their powers for all the wrong reasons.”

The camera came to rest on her beautiful face. She winked saucily as she placed a triangular witch’s hat on her head. “Welcome to the Witches Protection Program.”

“That was Jennifer Anis—”

Michael Okon is an award-winning and best-selling author of multiple genres including paranormal, thriller, horror, action/adventure and self-help. He graduated from Long Island University with a degree in English, and then later received his MBA in business and finance. Coming from a family of writers, he has storytelling in his DNA. Michael has been writing from as far back as he can remember, his inspiration being his love for films and their impact on his life. From the time he saw The Goonies, he was hooked on the idea of entertaining people through unforgettable characters.

Michael is a lifelong movie buff, a music playlist aficionado, and a sucker for self-help books. He lives on the North Shore of Long Island with his wife and children.

GIVEAWAY
This post is part of a virtual book tour organized by Goddess Fish Promotions.

Michael Okon will be awarding a $50 Amazon Gift Card, then 5 signed copies of the book (US ONLY) to randomly drawn winners via rafflecopter during the tour.