Justice: A Choose a Hero Romance™ by Tracy Tappan (Spotlight, excerpt, and review) 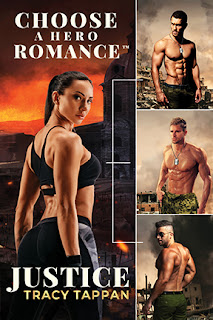 A Choose A Hero Romance™
by
Tracy Tappan

Now, more than ever, don’t you want choice and control in your life?

Get your hands on the new trend that’s taking the romance world by storm!

Tracy Tappan’s Choose A Hero Romance™
Where the reader controls the ending!

JUSTICE:
A Choose A Hero Romance™

A star athlete with a notorious reputation, Justine “Justice” Hayes is offered the chance to join the United States’ elite Special Operations Forces. SOF is standing up three new units called “Special Missions,” and Justice’s past as a master thief makes her perfect to lead one of these intelligence-gathering teams.

But an impossible condition stands between her and her dream job.

She has to survive the Navy’s most intensive and grueling SPECWAR training program: BUD/S.

Despite opposition, Justice soon finds herself wearing the rank of a Navy ensign and competing with some of America’s toughest men. Two of these SEAL candidates will come to test her mind and her heart, as much as her will to keep business and pleasure firmly separate. Temptations multiply when she crosses swords with the cocky helicopter pilot who commands her Special Missions flight crew.

Her vow to maintain a professional distance is finally shaken when an unorthodox training exercise goes terribly wrong. In the brutal aftermath, she needs a man who cares about her to help her fully heal.
But which hero will ultimately win her...?

The gentleman? The leader? The bad boy?

In this unique Choose A Hero Romance™, the reader decides which hero will earn a happily ever after with Justice Hayes.

Love every hero in his own way?

You can have as many happily-ever-afters as you want!

When you’re finished with one ending, simply choose another and keep reading.

All endings are available NOW

* Every Choose A Hero ending is different, complete with a distinct mission, individual character arcs, and exclusive story secrets.

Choose one book or all…a unique story waits for you in every one!

Content guidelines: This book contain profanity, some violence, and adult content. There is one scene not suitable for gentle readers, but the specifics of the scene are outlined before it occurs, allowing the reader to easily bypass it and skip ahead.
Please note the following:

** Now’s your chance to have your cake and eat it too—to make three different life choices vicariously through the heroine, and so earn herself multiple happily-ever-afters.

IMPORTANT: THIS IS NOT A COMPLETE NOVEL. This is the first part only of a Choose A Hero Romance™. Each ending is available on a separate bookseller page and contains between 140 and 160 pages of additional content. Readers may enjoy as many endings as they choose.

And please don’t forget to come back here and tell everyone what you think of the heroes!

When the day was secured, Justice stalked over to the enlisted barracks and planted herself at the flagpole outside, waiting with her temper on high boil.

A few minutes later, Ziegler and Sniper Kilgour strolled by.

Ziegler’s eyes rounded on her. “Whoa, Hayes. Your head looks like a plum.”

She compressed her lips into a flat seam. Yes, she’d seen it, thank you. Her temple was swollen into a healthy knot, the flesh of the wound staining into the kind of dark bruising that made it look like a squid had taken a dump on her head. “Could you tell Petty Officer Knight I’d like to speak with him, please?”

Ziegler must have warned Knight about her eat-shit-and-die expression. When he stepped outside his face was already set.

Well. Since he was braced for it… “Do you realize how close I came to a medical rollback today, and all because you couldn’t mind your own damned business?”

He crossed his arms and spoke with an edge. “I didn’t realize the welfare of my boat team wasn’t my business.”

There was enough sarcasm in his tone to make her want to rip it out of his larynx. She gave him an acid glare. “You need to learn to pay attention when I say I’m good.”

A muscle jumped in his jaw. “A flap of your skin was hanging down.”

“I do!” he thundered back. “It would’ve been grossly negligent of me not to send you to medical.”

She clenched her teeth, nausea bubbling at the back of her throat. The length of her esophagus felt like it was covered in road-rash. How awesome would it be if she puked, then fainted in the middle of this argument?

Keith shook his head. “Look at you, Justice. You’re gray.”

She thrust a tautly knuckled fist against her lips. Get through this…get through this… “Before I lose my mind,” and consciousness, “I need to make sure you understand something. On my completely hosed journey to BUD/S, I almost didn’t make it out of PTRR. If I’m rolled back there a second time for an injury, I might not ever escape. So I need you to stop being an overprotective jerk and treat me like a regular candidate—like we agreed—and I need you to do it right now—like I told you yesterday.”

He regarded her flatly. “No.”

“No?” Her head pounded so hard, she saw double for a second. She was getting really sick of this man acting like her basic human rights were optional. “You can’t say no. I’m not asking you to pass the fruit salad. I’m telling how I want to be treated as a human being.”

“If I see you wavering, I’m not walking by. If I see you on the ground, I can’t just step over you. That’s not the man I am. So the thing that needs to happen right now is for you to chill out.”

She dragged air through her teeth. The pigheaded dick wasn’t even making a pretense of caring about her needs. She stood in place, bile in her brain and anger in her throat—or something like that. “Now I really need you to pay attention. Are you, Knight? Listening? Carefully?”

He gave her a burning look.

“If you end up sabotaging my career out of some misguided notion that your chauvinistic pampering is actually leadership, then I will hack into all your accounts and destroy your life. Do you understand that?”

Are we? My, how the wrangler did enjoy bossing her around. “If you say so. You’re the boat team leader.” She cut around him, circumnavigating a bush. Her legs were trembling. This fight with Keith was definitely a fight-fight. There wasn’t a single sexual underpinning to how she felt right now—like she wanted to smash his face and bash his head and feed him his own balls.

“By the way,” she threw back at him, “pudding is for girls. Be a man and eat a candy bar for once, you pussy.” Storming across the grounds to the officers’ barracks, she thundered into her bedroom and slammed the door.