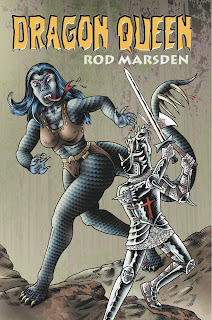 Mixing with your betters can get you killed. Dragons know this as does a certain maverick pilot and his researcher wife. It is possible to get thrown into events not of your own making in which you must do your best to survive. Meanwhile, somewhere not far from mainland Tasmania, there is an island named Green Maiden’s Folly. What’s it like? Is it paradise, or has it been made over into a worse destination hellhole than Devil’s Island used to be like in the 19th and 20th Centuries? On Green Maiden’s Folly, the destiny of the dragon is revealed.

Elanora’s black scales shone in the early morning light. She smiled at the effect the sun had on her spiked tail and also her legs, arms, and claws. The sun came up over the silvery sea. It was always a welcome sight, the start of a new day on her island. In the distance, waves rose and crashed before they could get to shore. A breeze touched her all too human nose, lips, and ears. It should have been unpleasant, but it wasn’t. She found the smell of salt in the air invigorating.

Lizards were bothered by the cold, but despite her lacertilian features, Elanora wasn’t a reptile. She was a dragon, and regardless of the plume of white coming from her mouth, she wasn’t shivering. In fact, she preferred a cool climate. She looked around for company because it was the loneliness that got to her, not the near frozen air.

She picked up a stick and drew a rectangle in the sand. A small blackish-grey crab came out of the rolling surf, and with its eyes on stalks, looked up at her. “These are the dragons,” she told the creature. “They are on the bottom. That’s not a good place to be. They’re mutants like me, but I’m special because I’m a female, and I’m not supposed to exist.”

Author Rod Marsden was born in Sydney, Australia. He has three degrees, all related to writing and history. He spent nine and a half years as a civilian clerk with the Royal Australian Navy. His proudest moments there were in the publications area.

He enjoys wildlife photography and in recent years, joined Illawarra Birders. He went on a birding expedition to the main north island of New Zealand, where he came upon wildlife unique to that country. There he also met up for the first time with correspondent, friend, and novelist Lyn McConchie. He shares his fascination with nature with his entire family, including his niece Jasmine Perala. Her pet, Kiki, is a young, female eclectus parrot and, soggy from a recent shower, is featured on Rod Marsden’s shoulder on the back cover of this book.

Many of his short stories, including “The Antarctic Pineapple,” have been published in Night to Dawn magazine. Undead Reb Down Under and Other Vampire Stories is a collection of his early short fiction on vampirism. Disco Evil is his first venture into the vampire novel. Ghost Dance is his first undertaking into dark fantasy involving a quest plus secret agents out to prevent demonic takeover. It has been reprinted with a new cover. Desk Job is his salute to Lewis Carroll.

His short plays, Zombie Vision, Hyde and Seek, and Smarty were well received at Cronulla Arts Theatre, south coast, New South Wales, Australia. Both his plays Smarty and Hyde and Seek made it into Sydney’s Short and Sweet contest.

He has a short story in The Twofer Compendium edited by Ruth Littner and Ann Stolinsky (2020) in which he mentions the Berry Celtic Festival, which took place every May in a farming community on the south coast of New South Wales, Australia. It is a festival that, unfortunately, had to be cancelled in 2020 because of the coronavirus but will hopefully resume in May 2021.

Additional stops on the tour can be found here