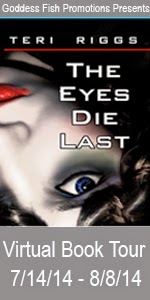 The Las Vegas Mayoral race is heating up, and the incumbent doesn’t have a prayer. Wealthy real estate speculator Nick Campenelli, who wants to legalize prostitution in Clark County, and former pastor Louis St. Louis, running on a 'clean-up-Vegas-by-getting-rid-of-the-whores' platform, are the front runners.

They’re also front runners on the suspect list for a string of murders. Kennedy O’Brien, four-year detective with cop blood running in her veins, and her partner Wilder “Wild Thing” James, a veteran, are determined to find the man who’s murdering prostitutes who work the wrong side of the street, and they don’t care how important or politically active he is.

The killer is a man with a mission. He stalks the women before he kills them, leaving a “BEFORE” photo on their bodies, and sending an “AFTER” shot to the local news hound. Ed Hershey, an aging newscaster with just the right amount of grey in his hair, is determined to turn this story into a network gig, and his interference, along with the LVTVS legal team, are making Kennedy and Wilder look bad. Campenelli’s good looks and charm, and St. Louis’ vitriolic hatred of prostitutes are muddying the waters too, and now the killer seems to have taken a liking to Kennedy.

So the big question remains. Can she get him before he gets her?

Wilder was fine, just winded.  She turned to Elvis, ready to whip some mad on him.  “Would you mind explaining what you’re doing here?”

“Sorry, Detective Gorgeous Eyes.  I’m trying to find out who killed my Priscilla.  I might possibly, have overheard you and your partner talking about staking out the store.”

“I thought I’d have a look myself—undercover.  I was doing a decent job of it until I saw Detective James take off like a bat out of hell.  I followed in case he needed backup.  And, well, here I am.”  Elvis sheepishly looked away.

“Undercover?  In a fucking, flashing, light up Elvis jump suit?”  She looked him up and down, blinking at the lights on his clothes.

“I accidentally hit the on button while running.”

Kennedy turned to Nick, who still had that same grin she suddenly despised, dimples and all, plastered on his face.  “What about you, Campenelli?  What’s your story?”

“Just out for a stroll, Detective.”

Wilder and Elvis both stifled grins and she shot them a look that shut them down.  Wilder should know better than to mess with her when she was pissed, and she was really pissed.

“If I had the time I’d haul both of your asses in for obstruction, lock you up, and throw away the key.”

“Well now, it’s lucky for us you’re pressed for time.”  Nick sounded smug and he was still smiling. Damn the man.

Wilder turned to Elvis.  “You get a good look at the man I was chasing?  Could he be the man at the casino taking pictures of you and Priscilla?”

“I’m not sure.  He sort of looks familiar.  But I’m really not sure where or if I’ve ever seen the dude.”

“The man is my campaign manager, John Tully.”  Nick offered, “You may have seen John on TV with me.  We’ve been on camera quite a bit lately.”

Wilder, his breathing back to normal, asked, “Mr.  Campenelli, how can we reach your campaign manager?  There are questions we’re going to need answered.”

Nick scribbled down a few notes on the back of a business card and passed it over.  “Try calling these numbers.  If they don’t work, I’ll call my assistant and she’ll get you John’s address.  He lives in Summerlin, I believe.”

Wilder pocketed the card.  “Kenny, I think this stakeout is a bust for the day.  I’ll take Elvis to Metro, go through some of the mug shots and get that picture of St. Louis in front of him.  We’ll see if he spots anyone.”

“No thanks to these two,”  Kennedy snarled.

Teri Riggs was destined to be a writer.  As a small girl she didn’t read bedtime stories, she made up her own.  Who needed Little Red Riding Hood or The Three Little Pigs when there were so many great tales bouncing around in her head?  When she grew up and became a mother to three little girls, she continued the tradition of making up bedtime stories.  On the occasions she chose to tell conventional fairytales, Teri usually gave them a bit of tweaking here and there or added a new ending.  Her girls loved it.

After her daughters had the nerve to actually grow up and leave home, Teri discovered she had a passion for writing and jumped right in.  It came as no surprise she chose to write mysteries and happily-ever-afters since that’s the genres she loves to read.

Teri lives in Marietta, Georgia with her husband, one of her daughters and two dogs that seem to think they rule the world.  And some days Teri thinks maybe they do.

Teri still frequently tells herself stories as she falls asleep.  The only difference now is she wakes up the next morning and turns her bedtime stories into books.