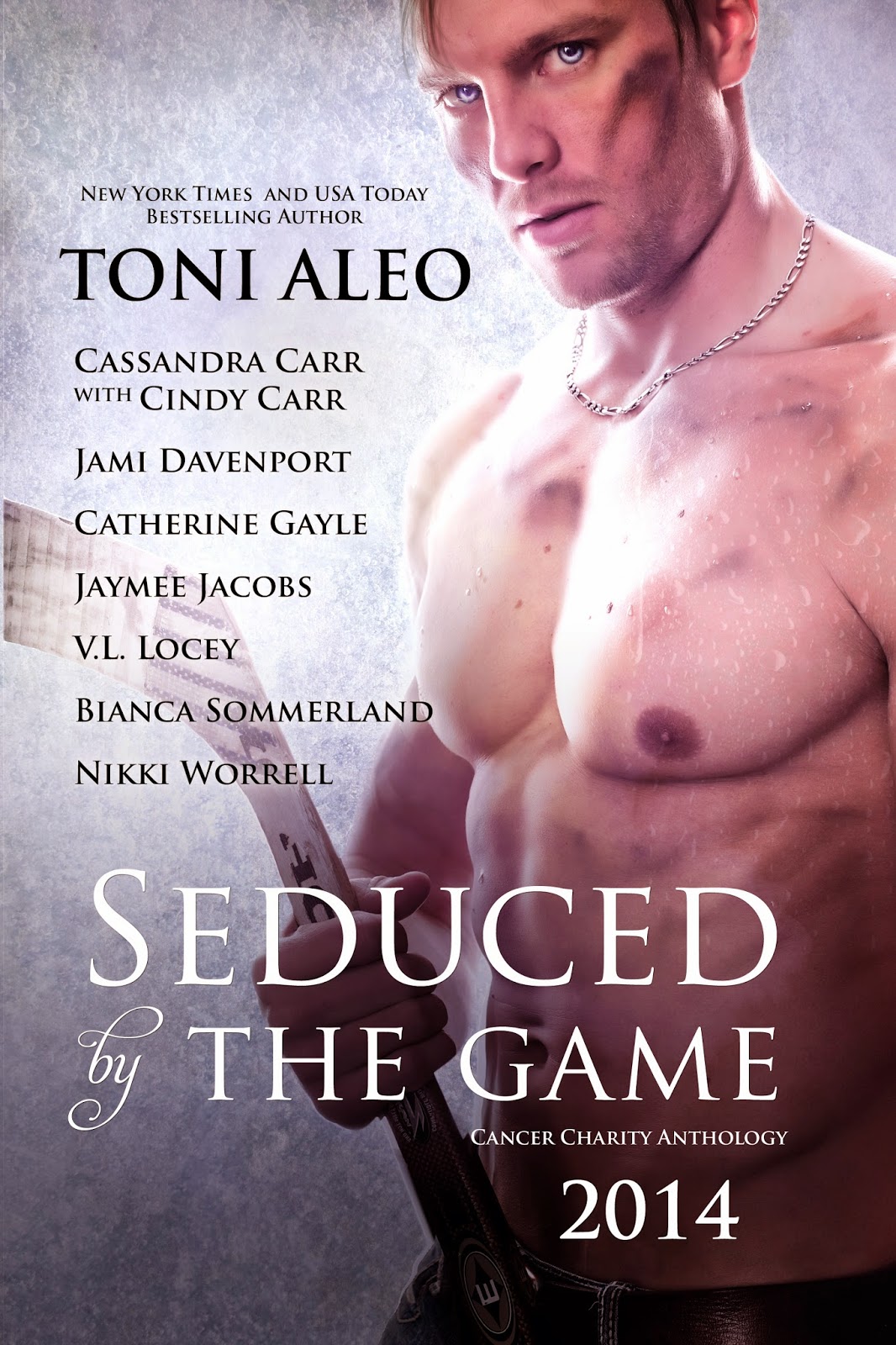 It’s time to drop the gloves and fight!

Support the Fight against cancer that is.


TANGLED IN THE LACES

In Tangled in the Laces, Karson King is on the fast track to the pros and Lacey Martin is coming back from a hard fight against cancer and is terrified of him but their love is too much to ignore. Will Karson prove that he will protect her heart at all costs, or will he leave Lacey to pick up the pieces of her life once again?

By Cassandra Carr and Cindy Carr

When Hannah attends an all-star game, she doesn't expect a hockey player of all people to turn her world upside down. Her sister is married to a player and Hannah never wanted that life. But Scott could change everything. For Scott's part, he has to know the woman who stirred his blood with just a look, and once he does, he realizes he wants Hannah to be his forever. Now to convince her...

Professional party crasher, Izzy Maxwell, needs the cooperation of reluctant party guest Cooper Black, the team captain of Seattle’s new hockey team, but Cooper can’t get past his anger over the team’s relocation to Seattle. Can Izzy melt Cooper’s frozen heart or will this party crash along with her fledgling business?

Katie Weber has had a crush on Jamie Babcock for almost two years, since he joined her father’s hockey team, the Portland Storm as an eighteen-year-old rookie. When cancer takes her health, her hair, and even her friends, she can’t bear to go to senior prom…until Jamie intervenes.

Bryan's life gets turned upside down when he gets traded to the Dallas Comets, and things get even messier when he meets Georgiana, the Director of Team Services. He's got a lot of work to do to prove his worth to his new team, but Georgiana's sure he'll prove to be a valuable trade.

Superstar Cam Evans is fighting to climb out of a slump that`s growing worse with each day of living in denial. Fresh from the minors, Jacobi Neal is hungry for this chance to play back-up for the legendary goalie. Can two men battle each other, their inner demons, and the sizzling attraction building between them?

Nothing could stop Tim Rowe, the assistant coach of the Dartmouth Cobras, from falling in love with Madeline, but love alone can’t satisfy every need. Sometimes, to reach the goal, you have to take the chance with a . . . Blind Pass.

Keith Lambert is the captain of the Flyers—until he’s not. To everyone’s shock, he’s traded to the San Diego Scorpions. As if that’s not bad enough, Phoebe, his girlfriend of two years, decides she doesn’t love him enough to follow.

All alone in a new town, Keith is drawn to Kelly, his take out delivery girl. When she shows up at ice girl tryouts, he’s lost. She’s all he can see. Can he convince her to forget her past and take a chance on him or is he destined to be alone in a new town a little bit longer? 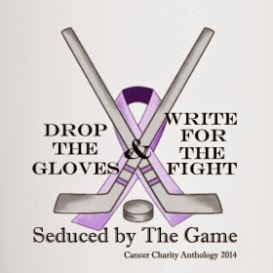 My review:
Seduced by the Game - A Charity Anthology

is a collection of eight delicious contemporary romance stories that center around the sport of hockey.  Most of these authors are new to me, and I can only groan, because my TBR mountain has exponentially increased, now that I have found some new favorites!

Tangled In the Laces by Toni Aleo centers on Karson King, whose attraction to his teammate’s sister, Lacey Martin, is complicated by not only her family members but also by her own scars, emotional and physical.  Karson is not easily daunted, on or off the ice, and must convince Lacey that he sees her as the strong warrior she is, whose femininity is not defined by her physical form.

This poignant story is a wonderful tribute to those who have had their lives forever altered by the grim specter of breast cancer, and provides a deliciously romantic tale that whets one’s appetite for a continuation, that, unfortunately, remains to be published!    This is a great introduction to several characters, but be forewarned, it does not have an ideal ending!  I will be drumming my fingers impatiently until next year!

Hooking Hannah by the daughter and mother team of Cassandra and Cindy Carr, tells the story of Scott Richards, who becomes intrigued by the sister-in-law of one of his opponents, Hannah.  The problem is, she doesn’t like hockey players.  Their sizzling attraction to each other surprises them both, but an unexpected injury makes them take a good look at whether they truly want a relationship or not.

A great combination of sensuality and romance, as well as a glimpse of some of the dangers of this exciting and physically challenging sport.  There are several charismatic players seen briefly and a delicious introduction to the sexy hero and his heroine and one can only hope that there are many more stories about these players and their loves.
Crashing the Boards  is part of the ‘Seattle Sockeyes’ series by Jami Davenport and follows captain Cooper Black as he and his team get abruptly relocated to a new city and saddled with a new coaching staff.  Professional party crasher Isabella Maxwell and her sisters have their work cut out for them to make the glum teammates start to feel comfortable about their new situation.

A sizzling tale that gives a different perspective on all that is involved when a team is relocated plus introduces an unusual vocation.  Great chemistry between the main characters and a nice teaser to get one interested in reading more about Cooper and Izzy (and her sisters, not to mention the rest of the team!).
Taking a Shot by Catherine Gayle is part of the ‘Portland Storm’ series and is an emotional and touching tale about a young woman’s courageous fight against leukemia, and the support that she gets from her family and the entire team that her dad plays with.  Jamie (Babs) Babcock has been attracted to Katie Weber for a while, but knows that he will have to overcome her father’s objections...and finds a perfect excuse to spend time with her when prom draws near.

Wow, this is definitely a story that should be read while holding on to multiple tissues.  The poignancy of the situation combined with the realistic look at the struggles that have to be overcome, both by the person suffering from the disease and friends and family, makes this a very impressive tale.  It was interesting to also be presented with the perspective from both sides, as perceived rejection is not necessarily the reason that one becomes isolated, but rather the feeling of inadequacy or lack of knowing what to do can make friends withdraw.  Definitely a thought-provoking and beautiful story and I will be looking for additional tales by this author.


A Valuable Trade by Jaymee Jacobs follows Bryan Comstock through the upheaval in his life as he relocates to the new city following his trade to their hockey team.  Georgiana Pierson, Director of Team Services, tries to make everyone on the team comfortable and smooth their way, but her unexpected reaction to Bryan threatens to change both of their lives, significantly.

This is an enjoyable short sexy story that gives another glimpse into the business of the sport as well as its impact upon various members.  Great chemistry and a great start, hopefully there will be more to come.
Heir Apparent by V.L. Lacey centers on Jacobi Neal as he joins the team as backup for  his idol, Cameron (Cam) Evans.  His hero worship is complicated by his attraction to the older man who is understandably threatened by the fact that not only is his place on the team inevitably drawing to an end, but he is also being forced to face some truths about himself that he would rather not acknowledge.

This sizzling m/m tale presents a complex tale that explores the challenges faced by gay players who are still finding their comfort zone in the sport.  There is a poignant conflict between Jacobi’s attraction to someone who openly desires him and someone who hasn’t faced his own sexuality, not to mention the age differential that is complicated even more by the competition between the outgoing former hero and the incoming player trying to make a name for himself.  A lot of emotion in a compact story.
Blind Pass by Bianca Sommerland is the prequel to the ‘Dartmouth Cobras’ series and details the rocky path of romance traveled by Assistant Coach Tim Rowe and flight attendant Madeline, who have to work out how Madeline’s experience with her rambunctious brothers will color her interaction with the team, and more importantly, how their respective roles in the D/s lifestyle will affect any relationship they enter into.

Captain, My Captain by Nikki Worrell follows Keith Lambert as he takes up his duties with a new team as well as deals with the remarkable developments in his personal life.  Drama ensues until he figures out what he really wants.

This is not quite my kind of story even though it is probably reflective of reality.  Things were a little inconsistent and I was a little puzzled about the motivations behind one character’s actions, since I didn’t think that she was likely to be a puck bunny, despite her behavior, and I thought Keith was a little too obtuse, since some of the drama that ensued was predictable.  I really appreciated the glossary of terms which were very useful for a person who doesn’t have a lot of familiarity with the sport and I enjoyed the additional peek into the world of hockey.

A copy of this collection of fascinating stories was provided to me for review.
Posted by ELF at 12:30 AM