The Bones of You by Laura Stone (guest post, excerpt and GIVEAWAY) GFT

It is my pleasure to share a guest post by Laura Stone...(and...HAPPY THANKSGIVING to those of you who celebrate!)

Movies like to have these “First Dates” all about grand gestures: a balloon ride, a magically lit tree with a four course meal served underneath, a surprise limo or helicopter ride to some exotic locale. And while, hey, I wouldn't turn any of those date options down, they're also not realistic for most of us. And more importantly, that sort of huge gesture isn't really needed. It's not about the Big Event, it's about the romantic thought behind it.

In The Bones of You

, Oliver plans an afternoon and evening of specific locations and surprises for Seth as a way of rekindling their former relationship, and without giving too much away, it works. I based a lot of that chapter on an experience I had with maybe the most romantic boy I've ever known on our first date.

We were both poor college students, each of us paying our own way and working two jobs. There wasn't a lot of money for wining and dining. He'd done a little research on me via my roommate, and took me to places I loved. We spent twenty four hours together talking, getting to know each other, and then there were random little surprises of turning a corner and finding ourselves in front of a sculpture in a city garden that I loved. We stopped in a cafe to get a slice of my favorite cake. We drove to the far side of town to watch the sun rise over the mountains. With the exception of the cake, we didn't spend any money, we didn't go to any fancy restaurants or clubs, we simply spent our time getting to know each other, excited to find so many similarities between us.

At one point, I asked if he wouldn't mind if I called my roommate to let her know we were still out (this was back before cell phones—ancient times!), and he laughed to himself and said quietly, “You don't even know. I'd give you the moon.” I'm blushing and grinning just remembering this. About two days after our perfect date, one that neither of us wanted to come to an end, I had a package delivered to my dorm: a giant poster of the moon and a card, “I told you I'd get it for you.”

Romance isn't about glitz and glamor, although that's okay, too. For me, and it's how I wrote the story, it's about connecting with who the other person is and letting them know how special they are to you. Romance is remembering an important day and honoring it, even with a simple card. It's knowing that your partner likes a particular scent, has a favorite restaurant, loves more than anything else to curl up with a blanket, a good book, and you. It's honoring what you've learned about your partner and making them feel like they have a permanent place in your life. Gosh, who doesn't want to feel special to the person with whom they're in love?

Towards the end of this well-planned outing between Oliver and Seth, Seth is almost overcome by all of the little details Oliver never let himself forget over the years. Seth had revealed earlier how different dating was in New York City versus how they'd grown up in their little town, and it's almost overwhelming, how good it feels to have someone make him feel special again, and in a way only Oliver ever managed. As for what happens after that, you'll have to read to find out.

As the stodgy-yet-fabulous Aunt Josephine says to Anne Shirley, “Make a little room in your plans for romance again, Anne, girl. All the degrees and scholarships in the world can’t make up for the lack of it.” I couldn't agree more.

The Bones of You

Oliver Andrews was wholly focused on the final stages of his education at Cambridge University when a well-meaning friend up-ended his world with a simple email attachment: a clip from a U.S. morning show.

The moment he watches the video of his one-time love Seth Larsen, now a Broadway star, Oliver must begin making a series of choices that could lead him back to love—or break his heart.

The Bones of You is full of laughter and tears, with a collection of irritated Hungarians, flirtatious Irishwomen, and actors abusing Shakespeare that color Oliver and Seth’s attempts at reconciliation.

“Do you have any idea how badly I want to kiss you right now?” Seth murmured.

Oliver's heart gave an enormous, pained thump and with a choked cry, he leaned forward the mere inches between them, pressing their lips together. He felt Seth's hand slide from his cheek to be buried in his hair, could feel Seth's strong, lean chest pressed against his. Oliver held their bodies together tightly even as his mouth was still gentle on Seth's, sliding softly over Seth's lips, amazed that this was even happening.

Seth pulled back and pressed their foreheads together, his hand massaging Oliver's scalp. “God, I've missed you so much, Oliver—”

“I know,” Oliver exhaled before kissing Seth again, all thoughts of being wary gone. He opened his mouth, moaning softly when Seth followed suit, splaying his hands across Seth's back when their tongues touched, memories of all of the kisses they'd shared in the past coming back and speeding up their reconnection. 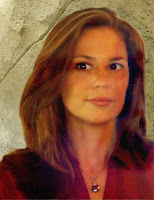 A life-long fan girl, Laura Stone takes a leave of absence from the glamorous life of motherhood while the kids were in school, devoting her days to writing full-time. In the past she's worn the hat of actress, Master Gardener, and computer geek, but now sticks mostly to a Texas Ranger's ball cap as she raises her children. They're not fully raised, but then again, she would say that she isn’t either.

She began telling stories to her parents at the age of four. She was so successful in catching her parent's attention that her father actually dislocated his back, trying not to sit on her imaginary cat, Doka.

She lives in Texas as proof that it's not totally populated by hard-line right-wingers—and because that's where the good tamales are from.