On a dare from his girlfriend's brother, Javvan steals a neighbor's car. Now he's got a criminal record and a bigger problem: get a job or violate his parole. Endless interviews later and no one will hire him because of his criminal record. Whatever happened to a second chance? Finally, he gets a gig with a contractor named Kevin, and Javvan figures his life is on an upswing. Too bad Kevin's a thief and he's given Javvan one choice. Help him steal, or he'll make sure Javvan ends up back in jail.


“Remember that house we did yesterday?”

“The wife phoned. Says they’re missing some stuff from the home office.”

It’s enough to make me almost throw up. “Kevin, I was on the phone with you. Whatever they say is missing—”

“Some money and a watch.”

“You know I didn’t take it. I don’t even remember seeing anything like that.”

He watches me for a minute, then smiles. “Yeah, I know you didn’t.”

Kevin walks over, puts his hand on my shoulder. “But the problem is your fingerprints are on the drawer handle, aren’t they?”


“Yeah.” I twist in my chair so I can see his face, but he’s already moving to stand in front of me. “But you can explain that. I mean, I was just doing what you told me to.”

He leans against the desk, crosses his arms. “I could.”

The way he says it—like he knows something I don’t—makes my stomach churn. “Kevin?” 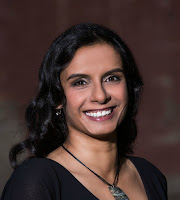 Natasha Deen’s family moved to Canada to escape the racial violence and political unrest of Guyana, South America. Her other books include Burned, Sleight of Hand, True Grime, and Guardian, which was a 2015 CCBC Best Pick for Kids and Teens, and nominated for a 2015 Sunburst Award. Natasha lives in Edmonton, Alberta with her family, where she spends A LOT of time arguing with her cats and dogs about who’s the boss of the house.

by Natasha Deen is a young adult story about Javvan Malhotra, who makes a serious mistake trying to impress a girl and finds himself in serious trouble that impacts his family and his future. Caught in a moral dilemma, he must decide whether to compound his mistakes or find a way to fight an apparently losing battle to regain his self-respect and find a chance for atonement. An unexpected ally helps him approach his problem from a new perspective and figuring out who to trust will be the key to determining the success of his plans for the future.

This excellent contemporary story blends a myriad of elements in an engaging tale. I love the way things snowball from a poor decision made by an underage boy into a commentary on the importance of family support, a snapshot of the way racial discrimination can range from overt action to subtle digs, and a revelation of the impact that one action can have on the path the rest of one’s life takes. The glimpse of the challenges of moving to another country and maintaining one’s culture while becoming part of a new environment gives texture to the story and I thought the gradual revelation of the morass that Javvan is sinking deeper and deeper into provided a thought-provoking element. I enjoyed the various secondary characters and hope to see them in future tales and I thought this was a well-written and enjoyable quick read.