Why Cats are a Natural Choice for a sleuth


I’ve often had people ask why I selected a cat as Nora’s sidekick in my Nick and Nora mystery series. Why not a dog, or a bird, or a snake? (yes, a snake). Well, the answer’s simple.

Cats themselves are natural sleuths.

That old saying, ‘curiousity killed the cat’ wasn’t just something someone made up. Cats have lots of natural curiosity, inquisitiveness, qualities that every good sleuth possesses. Those of you who own a cat know what I’m talking about, but if you don’t, check out these series where the cats are the star detectives!

This series centers around Kathleen Paulson, a librarian from Boston, and two stray cats with special powers, Owen and Hercules, in fictional Mayville Heights, Minnesota. Kathleen has moved to Mayville Heights from Boston after her fiancée marries a waitress after an argument, and ends up adopting two strays, a tabby named Owen and a tuxedo named Hercules. Turns out the cats have magical powers: Owen can turn invisible and Hercules can walk through walls! Which provides quite a bit of humor! There is also a bit of romance in the form of uptight detective Marcus Gordon. Plenty of quirky characters and homespun charm! Kathleen often finds herself relying on the abilities of Owen and Hercules to piece together the puzzle!

The Cat in the Stacks Series by Miranda (aka Dean) James.

Set in the fictional town of Athena, Mississippi, the action centers around librarian Charlie Harris and his Maine Coon cat, Diesel. Diesel is quite large for his size, but very lovable, and Charlie walks him on a leash and takes him pretty much everywhere he goes. Unlike the cats in the “Magical Cats” series, Diesel is more of a sidekick for Charlie than an active participant in the mystery solving – although he does lend a paw from time to time.

This charming series features a large black cat, Hamlet, as the star feline. Hamlet isn’t above snagging a book or two to lend his human, Darla Pettistone, a clue or two when she’s stuck in the middle of a mystery. Plus, black cats have natural psychic ability (or so my pseudo-black cat, ROCCO, tells me)

Unquestionably the “Bogart” of feline sleuths, Midnight Louie rules Las Vegas. When he’s not out strutting his stuff on the strip, Louie can usually be found lending a paw to help his human Temple Barr, solve a mystery!

The Nick and Nora series by T. C. Lotempio

Oh come on, you knew I just had to mention my own, right? Ex-investigative reporter Nora Charles still can’t resist a good mystery – but when she gets stymied she’s got her twenty-two pound tuxedo cat, Nick to help. Nick, who formerly belonged to a missing PI, has savvy detective skills of his own- which include spelling out key clues with his favorite toy, Scrabble tiles!

And if you are still skeptical about why cats make great sleuths, ponder this – Sir Arthur Conan Doyle owned a cat!

While catering a gala for the Cruz Museum, Nora Charles agrees to look into the disappearance of director Violet Crenshaw’s niece, a case previously undertaken by her frisky feline friend Nick’s former owner, a private eye whose whereabouts are also currently unknown.

As Nora and her curious cat Nick pull at the string of clues, they begin to unravel a twisted tale of coded messages, theft, false identities, murder, and international espionage. Nora dares to hope that the labyrinth of leads will not only help them locate the missing young woman, but also solve the disappearance of the detective. That’s if Nora can stay alive long enough to find him...

I twisted the knob and the door swung inward, almost hitting another furry shape crouched behind it. The cat that charged at me out of the darkness had a white body and an orange and white face. Its fluffy white tail waved like a flag signaling surrender. It landed on all four paws and stood, back arched, bright blue eyes glittering.

I looked at Nick who’d sat back on his haunches and was calmly regarding the newcomer. “Is this what you wanted me to find, Nick? You wanted me to let this cat out of here?” I made an impatient gesture. “I told you I had things to do.”

I could swear that Nick shook his head. “Meeoow,” he yowled.

The other cat turned around twice, echoed Nick’s cry, and then shot like a guided missile back through the door. I peered cautiously inside. The room beyond was black as midnight, and I had no flashlight – nor did I have the cat’s extraordinary range of night vision. I felt along the wall and found a switch, which I flipped. Illumination revealed a flight of steps leading downward into what was most likely a basement or a storage area. Nick and the other cat were halfway down the stairs. Both paused, turned and looked at me and meowed plaintively.

“I do not have a good feeling about this,” I muttered. I cautiously crept down the stairway, emerging into what appeared to be the museum storeroom, filled to overflowing capacity with boxes, cabinets and trunks of varying sizes. I walked over to one and read the white and red printed label: PROPERTY OF MEECHAM EXHIBIT

“Oh great,” I muttered. This was obviously the place where the packing was stored for the exhibit articles. The cats were dashing madly around the room – off to a large trunk on the left side, then back to me, around in a circle, and then back to the trunk. The orange and white cat began to mew pitifully as Nick chased a few red threads on the floor. Fighting the tingling feeling inching up my spine, I moved forward and saw a black Mary Jane dangling over the side, partially obscured by a swath of red satin.

With a sinking feeling, I walked all the way around, stopped and bit back a scream.

Daisy Martinelli sat sprawled in the trunk’s center, her neck cocked at a rakish angle, the red scarf tied around it pooled like a puddle of blood in her lap. One finger was caught in the scarf’s frayed edge, almost as if she were pointing. Her sightless eyes stared straight ahead, and a little bit of drool trickled out of the side of her mouth. Her arms were tangled in the folds of a scarlet cape looped carelessly around her shoulders.

I didn’t need to feel her pulse to see that she was quite, quite, dead. 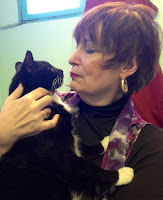 While Toni Lotempio does not commit – or solve – murders in real life, she has no trouble doing it on paper. Her lifelong love of mysteries began early on when she was introduced to her first Nancy Drew mystery at age 10 – The Secret in the Old Attic. She (and ROCCO, albeit he’s uncredited) pen the Nick and Nora mystery series from Berkley Prime Crime – the first volume, MEOW IF ITS MURDER, debuted Dec. 2, 2014. Followed by #2, CLAWS FOR ALARM. #3, CRIME AND CATNIP, is out this December. She, Rocco and Maxx make their home in Clifton, New Jersey, just twenty minutes from the Big Apple – New York. Catch up with them at www.tclotempio.com and www.catsbooksmorecats.blogspot.com

Where to find them: