Michael saw the small panel truck approaching in the distance, trailing a cloud of dust many times its size. He heard the faint sound of the helicopter again, but this time, it seemed closer. He looked back at the mountain and could see it now—a bulbous-nosed blue dot transversing the mountainside as if looking for something. Not good, he thought, not fucking good at all.  He watched as the small, nimble craft changed direction, now advancing towards the box truck. Michael estimated the truck was slightly less than a mile away.  He  held his thumb up and measured the size of the aircraft against it—he estimated the helicopter to be about forty feet long. At a distance, Michael could cover the helicopter with his thumbnail—he estimated the bird to be about 10 miles away. It was now rapidly closing the distance and decreasing its altitude—as if preparing for a strafing run.

Their weapons were down by the lagoon, leaning on the rocks that lined its edge. He ran for the lagoon. There was an AK-47 that had the required range and oomph to take down the aircraft, and he needed it.  Clive, Eddie, and Beth stood at the edge of the water watching as he ran towards them. “Weapons,”said Michael, yelling as loud as his overworked lungs would allow. The two men scrambled to pick them up and then ran toward Michael. The effort saved Michael about twenty feet or just a few seconds, but every second counted in a time bound game. He grabbed the AK from Eddie turned and accelerated back up the sandy incline. Michael bolted up the road, leaving the two other men—quite literally in his dust. He reached the desert floor, and took aim at the chopper, but lowered his rifle. Eddie caught up to him and doubled over to catch his breath. “Why aren’t you firing?”

“We’re out of range,” said Michael. “And we don’t know what they want.”

As if in answer, the helicopter turned it’s cargo door toward the path of the vehicle and a loud whoosh followed by a streak of propelled fire launched toward’s the truck. The warhead exploded a few feet behind the truck’s cargo compartment—apparently, the shooter did not account for the truck’s forward motion. “Holy shit,” said Clive. “He’s got a freaking RPG!”

Michael couldn’t believe what he was seeing—some madman had fired an RPG at the vehicle from inside the helicopter’s passenger compartment. He was pretty sure he knew who that was. The copter went around for another pass—perhaps to allow the shooter to reload. “Come on, let’s go,” said Michael. He broke into a run towards the truck, as the helicopter slowly circled. Michael felt he was in range and fired at the  helicopter. Tracers spaced every third round outlined the arc of fire that fell well short of the hovering aircraft. He witnessed the ineffectual results and began running again, hoping to close the distance on the helicopter before the shooter could fire the RPG again.

The copter moved to take up a hover on the dirt road, directly in the truck’s path. That maneuver brought the aircraft closer to Michael, but still not within his rifle’s range. He aimed it and elevated the barrel above the target—hoping to lob in an arc of bullets. The rounds fell short, and he elevated the barrel hoping to walk them onto the target when he ran out of bullets. He had no additional magazines. Eddie ran forward with the MP5 and handed it to Michael. He tried the same with the MP5, but given the weapons shorter range, he might as well have been spitting at them. Michael handed the empty weapon back to Eddie and looked with alarm at the hovering helicopter—the shooter had finished reloading and was aiming the rocket launcher towards the oncoming truck

Michael reached down and picked up several large rocks from the ground. “Help me,” he said. Eddie looked puzzled. “Help me pick up some rocks.” Eddie nodded in understanding, reached down and began collecting some large rocks. Michael ran to close the distance with the helicopter as if hovered perpentidular to the road, just a few feet from the ground.

Michael had two large rocks—one in each hand. He got within thirty feet of the aircraft and launched a rock at the open passenger compartment. It flew over the helicopter. Michael ran forward again and let fly the other projectile. The rock flew through the air, arced into the open compartment and into the shoulder of the firer. The force of the impact turned him to the right just as he was squeezing the trigger.

The primary motor of the rocket fired and launched the projectile into the cockpit as the secondary motor fired and drove the warhead into the aircraft’s control console. The exhaust from the chemical-fueled motor burned the pilot’s face and blinded him. He reflectively pulled on the controls and drove the helicopter into the hard-packed dirt road. The craft turned over on its side, and the blades of the motor rotated into the hard packed desert earth and collapsed with the thunderous and calamitous sound of wrenching metal. The aircraft’s fuel tank ruptured and bled aviation gas onto the already blossoming fire.

They all stood mesmerized by the conflagration. A figure engulfed in flames struggled to escape the fire. He crawled from the inferno and rolled in the dirt as he screamed in pain and fear. Clive held up his pistol and aimed it at the man. Micheal suspected the burning figure was most likely the heartless son of a bitch who killed Jimmy, the DEA agent, in cold blood. He put his hand on Clive’s arm and forcefully pushed it down, so the pistol was aimed at the ground. “Let the bastard burn.” 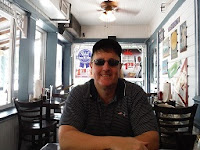 TS O’Neil graduated with Honors from Northeastern University in Boston, Massachusetts with a Degree in Criminal Justice and graduated with High honors from the University of Phoenix with a Master’s in Business Administration in Technology Management. He served as a Rifleman with the Marine Corps Reserve, an Officer in the Military Police Corps of the United States Army, and retired from the Army of the United States (AUS) as a Lieutenant Colonel in 2012. He is a veteran of Operation Iraqi Freedom. TS is currently employed as a Senior Security Consultant, specializing in Information Security. He lives in Seminole, FL with his beautiful wife, Suzanne. He has written four books, Tampa Star, Starfish Prime, Mudd’s Luck and Mexican Hat Trick.

All are available on Amazon.com

First let me thank the author for his service in helping keep us safe. His experience obviously enhanced the realism in this story!

Mexican Hat Trick by T.S. O’Neil is Book 4 in the ‘Blackfox Chronicles’ and follows Michael Blackfox as he becomes involved in an intellectual property investigation at the behest of his friend Eddie Doyle. Danger and death shadow them as they follow the threads tangled with the Mountain Man clothing company that is being plagued by counterfeit knockoffs. Unfortunately, they are not the only ones interested in the fortunes of the successful company, and they may not be the most ruthless, but they definitely are willing to do whatever it takes to get to the bottom of the case, utilizing all of their formidable skills to do so…and remain alive while they’re at it!

Hang on to your hat and be prepared for a wild ride as you read this gritty and exciting suspense-thriller. Be forewarned that one needs a fairly strong stomach for some of the action that takes place, which underscores the lengths that criminals will go to in order to achieve their goals. It was fascinating to see behind the scenes of the designer clothing industry and discover the worldwide implications and economic impact of things like counterfeit versions. I enjoyed the action and the hair-raising adventures but things got pretty gory for my tastes and there was such a large cast of characters that I sometimes struggled to figure out who was on which side.

There are a lot of mysteries that wander through the story and I am not positive that all of them were resolved by the end, and I was a little frustrated by the typos, but I still think this was a very compelling read. There are wonderful twists and turns, exciting adventures and exotic locales described in a laconic vivid style that is reminiscent of a noir detective story. I had no problem reading this as a stand-alone, but judging by the references to previous events, undoubtedly some things would be cleared up by reading the first three books in the series. Those who enjoy stories by authors such as John Sanford or Wilbur Smith will probably be quite entertained by this tale.


A copy of this title was provided to me for review.