Two souls entangled in an eternal echo of true love…

Rowan and James have been drawn together in every existence since the beginning of time. But love's sweet promise is cut short after an unthinkable tragedy strikes two young families, shattering the bond in this lifetime.
Is love stronger than death? Can Rowan and James find another way to each other? Against all odds, a forgotten promise is remembered and kept, reuniting two souls destined to be together.

Rowan opened the closet door, jumping back as the hinges squeaked, and gazed around the empty space. It was an old fashioned small closet with a single hanging bar and a shelf on top. There were no visible signs of rodents.


The sound was coming from under the floor, it seemed. She knelt carefully, keeping her can of compressed air at the ready, as she examined the wooden floorboards. Looking closer, she furrowed her brow. The blemish was nearly seamless, but she could tell the floorboards had been cut. Despite her fear of the rodents, her curiosity was piqued. Was there actually a secret compartment hidden in the closet floor?


Rowan used her fingernails to pry up the end of one of the floorboards, peering down warily in case the mouse decided to jump out at her. After removing two more boards, she used the flashlight on her phone to examine the dark hole. No beady red eyes stared back her. The secret compartment in the floor contained only what appeared to be a dusty shoebox.


Rowan sprayed some compressed air around to be safe, then pulled it out the box marked Airwalks, men’s size twelve. Carrying it closer to the window, she sat down on the floor to lift the lid.


There wasn’t much in it. A crumpled pack of Marlboros, so old the tobacco had fallen out of the cigarettes. A lighter. Several baseball cards. A pencil drawing of a large tree, drawn by someone who was by no means an artist. A well-worn Playboy magazine with Pamela Anderson on the cover. Rowan glanced at the date—1997.


A wave of sadness washed over her. She must have found the secret stash of Bella’s long-dead brother. Poor kid. It seemed oddly intrusive touching the private things of a dead boy, and Rowan hastened to put everything back where she found it. But the sound of something rolling in the box caught her attention, and she peered in.


A stick? A small twig half the size of her pinkie was in the bottom of the shoebox. Why had the dead boy put a stick in his secret shoebox? Despite herself, she reached in to pick it up.


A wave of energy prickled through her body, like a shot of expresso, quickening her pulse and her breathing. She heard a noise behind her that sounded like a gasp of surprise, and turned sharply to find she was no longer alone in her bedroom. Rowan screamed as she leapt to her feet.


A man stood in the middle of her bedroom, blocking her only exit. Tall, dark haired, lean yet muscular, he was nearly naked, wearing what appeared to be bicycle shorts. How had he gotten in her room? What was he going to do to her? With a sick sense of panic, Rowan remembered Bella saying her ex had been a crazy stalker. Had he returned to kill them both?


“What the . . .?” The man’s voice was deep and grumbling as he glared at her with displeasure. “How the hell did you get in my house, Rowan?”


Rowan backed up, still gripping the stick, and desperately looked around for a weapon. “How do you know my name?” she squeaked.


He stepped closer, his broad shoulders and naked chest now very close to her face. She got a whiff of aftershave as she peered up into angry green eyes that seemed startlingly familiar. Blinking in confusion, she dropped her gaze for a moment, which unfortunately landed on his ripped abs and the trail of fine hair that lead down toward the low waistband of his bike shorts.


Oh, they weren’t shorts. They were underwear. An angry man who somehow knew her name was standing in her bedroom wearing nothing but a tight pair of boxer briefs.


“How do I know your name?” he echoed unbelievingly. “Are you on something?” Confusion lanced his face as he looked around the room. “What did you do to my bedroom?”


He took another step in her direction, reaching out as though to touch her. Rowan screamed, dropping the stick, and bent to pick up the discarded can of compressed air with the intention of bashing him in the face with it. But when she looked up, he was gone. 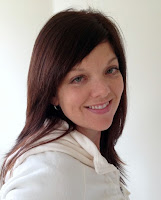 Erin S. Riley has an undergraduate degree in psychology, a graduate degree in clinical counseling, and is a board-certified lactation consultant. Since Erin was a child, she has been fascinated with human nature and what motivates behavior. She enjoys writing suspenseful, complicated love stories that take the reader on an emotional journey and end in happy tears. Erin is the author of the Sons of Odin Series: Odin’s Shadow; A Flame Put Out; and Oath Breaker; as well as a paranormal romance, A Promise Remembered.